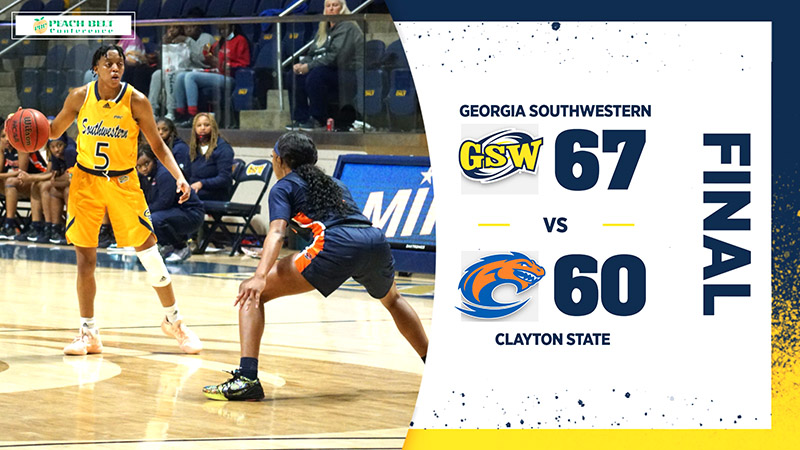 AMERICUS — The Georgia Southwestern State Women’s Basketball Team (GSW) defeated Clayton State (CSU) by the score of 67-60 Wednesday night, February 2 at the Storm Dome. The win was the fourth straight for the Lady Hurricanes and it gave them their 17th win overall on the season.

The 17-3 start is the best start in school history for third-year coach Justin Payne. The GSW offense started quickly after a stretch of low-scoring opening quarters in their last few contests. GSW scored 20 points in the opening quarter, led by junior guard Jacquelyn Levay, who had two three-point shots find the bottom of the net. In the second quarter, both defenses began to settle in, but the Lady Hurricanes held CSU to 25 percent shooting on 16 attempts. GSW went into halftime with an eight-point lead, with junior guard Ava Jones, the reigning Peach Belt Conference Player of the Week, leading the Lady Hurricanes with eight points.

In the second half, the Lakers began their climb back into the ball game and made it a one-score game early in the third quarter, prompting Payne to call a timeout to settle his team down.

“I just told them, ‘Man, y’all are fun to watch when we’re playing the right way, like, with our principles,” Payne said. 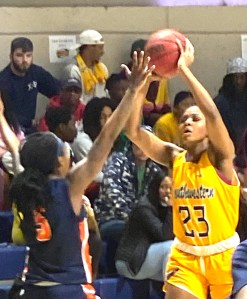 Out of that timeout in the third quarter, the Lady Hurricanes went on a run and extended their lead to 10. Jones and CSU forward Timi’a Swanson, a former Sumter County High School standout, went toe to toe in the third quarter as both scored seven points for their teams.

The fourth quarter was a stalemate, as neither team was able to increase or decrease the GSW lead. CSU outscored the Lady Hurricanes in the fourth, but not by enough as GSW closed out the game with a seven-point win.

GSW sophomore forward Kayla Langley led the Lady Hurricanes with 20 points and Jones poured in a total of 15. Freshman forward Daelyn Craig was also in double figures with 12 points in the winning cause. Swanson led CSU with a double-double as she scored 22 points and hauled down 13 rebounds.

The Lady Hurricanes (17-3, 9-2 PBC) will continue their home stand with three more games this week. Next on the schedule will be fifth-ranked North Georgia for their second matchup of the season against the Nighthawks on Saturday afternoon at 1:30 p.m. UNG is currently in first place in the PBC standings with a PBC record of 11-0.