After losing to Worth County, Sumter County Rifle Team takes down Early County on the road 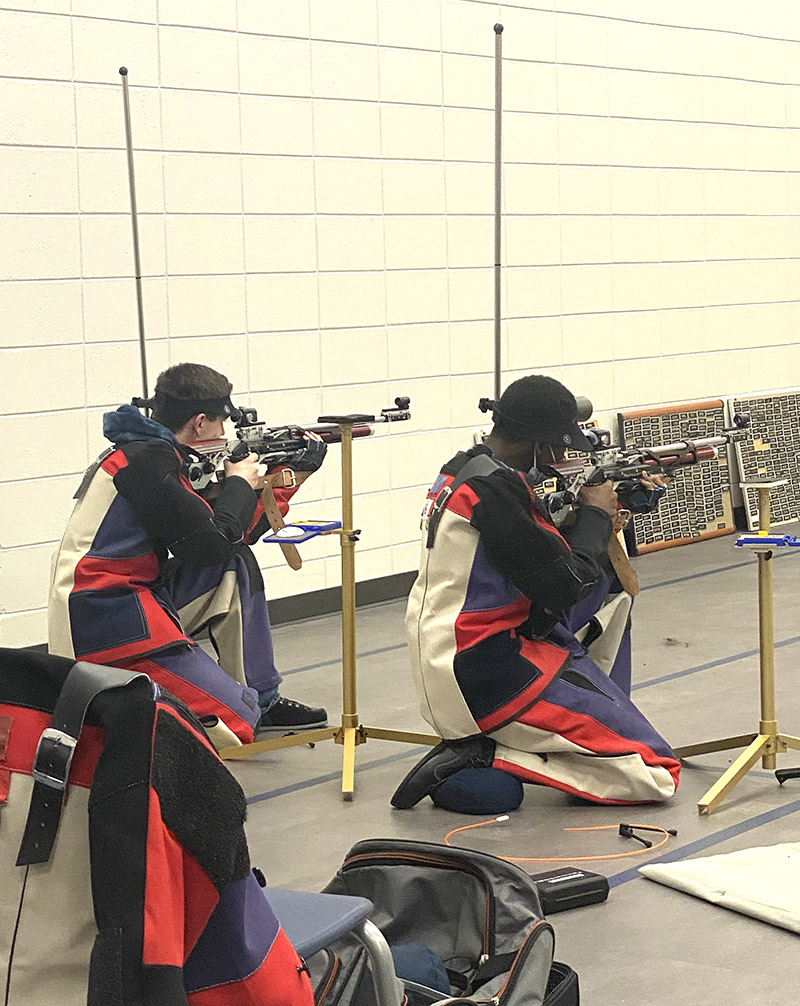 Sumter County shooters Ian Richards (left) and Caleb Josey-Durham (right) compete against Worth County in the Kneeling Position in the rifle match against the Rams. Photo by Ken Gustafson

In High School Riflery, there are three positions that each contestant competes in: the Standing Position, the Kneeling Position and the Prone Position. Each individual shooter can score a maximum of 300 points. According to SCHS Head Coach Seth Howell, the scores of the top four shooters for each team will add up to a team score so they can get a total of 1,200 points. “When the kids are shooting above 1,000, they’re usually shooting pretty good,” Howell said. 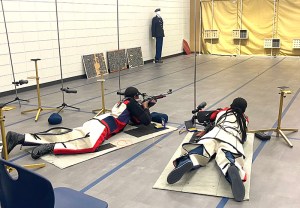 Sumter County shooters Mason Butts (left) and Ne’Skyria Geddis (right) compete in the Prone Position in the rifle match against Worth County.
Photo by Ken Gustafson

According to the rules stated in the 2020-2022 National Standard Three-Position Air Rifle Rules Handbook, each shooter gets five to eight minutes, depending on the type of position, to site his or her rifle before the start of Record Firing. 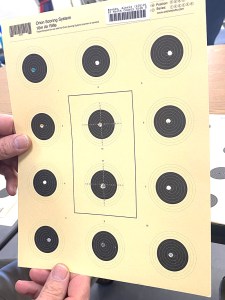 This is a target board that the shooters are shooting at during their rifle match.
Photo by Ken Gustafson

The members of the Sumter County High School Rifle Team are Caleb Josey-Durham, Mason Butts, Ian Richards and Ne’Skyria Geddis. They competed against the Worth County team of Alexis Brooks, Conner Day, Jessica Foster, Taryn Sinks, Casen Moore and Dakota Cloud. In the Prone Position competition, the Rams edged out the Panthers 374-15 to 371-15. In the Standing Position, Worth County edged out Sumter County 346-6 to 305-2. In the Kneeling Position, the Rams out shot the Panthers 370-13 to 351-6 and the total score of the match was 1077-32 to 1027-23 in favor of WC. 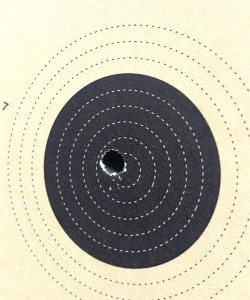 This is an example of a shooter hitting the “bulls eye” or small dot right in the center of one of the 12 black circles that the rifle shooters shoot at.
Photo by Ken Gustafson

The Panthers were able to rebound from the loss to WC the following day, when they traveled down to Blakely, GA and defeated Early County by the total score of 991-17 to 698-4. Ian Richards was the top shooter for the night with a 265 and 9 inner-tens score (265-9).

The Panthers’ next match will be at home on Thursday, February 10 against Dougherty at 5 p.m.