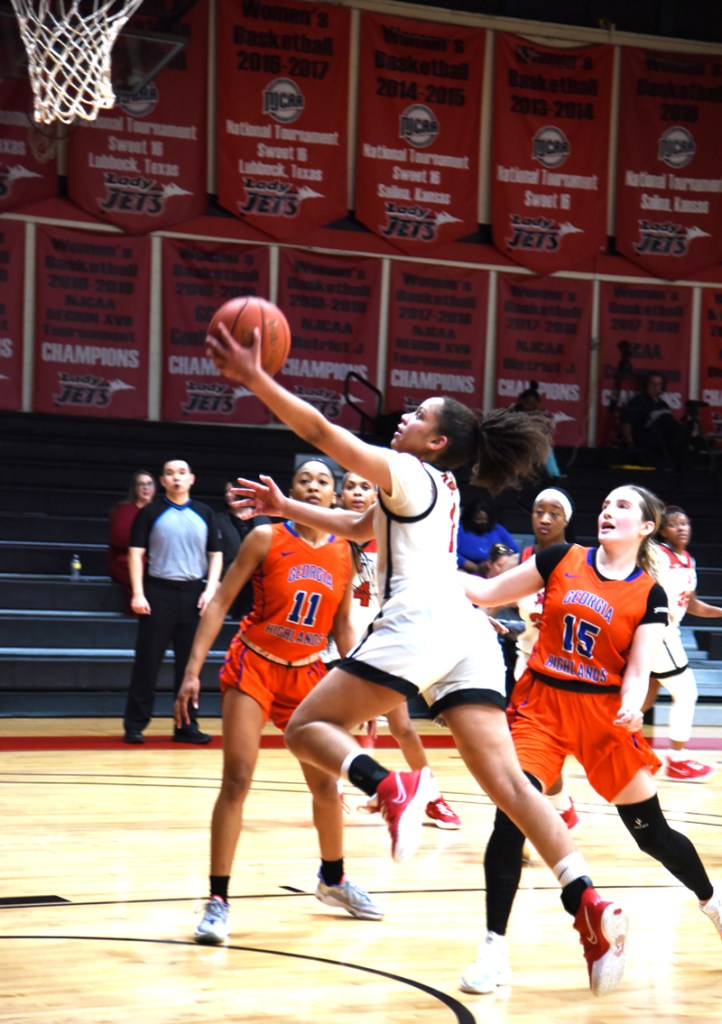 “When you play one of the top four teams in the country, you can’t turn the ball over 30 times and expect to have a chance to win,” said South Georgia Technical College Athletic Director and Lady Jets head coach James Frey.

“We are making progress against Georgia Highlands but when we play against them we play tight and very tentative,” said Coach Frey.  “We don’t act like ourselves for some reason.  Maybe it’s the nine freshmen who are a little intimidated playing against some third-year players.  I am not sure, but Georgia Highlands plays extremely hard and physical and we simply have not matched either in any of the three games against them.

“It 100% comes down to turnovers and we knew that going in.  If we limit turnovers, we have a great opportunity to win but we didn’t.  I thought Luana Liete played the best game of her young career.  She went at them all night and never backed down.  Unfortunately, she was the only one who had that mindset,” said Frey.  “We battled a battled a stomach virus all week but those are only excuses.  They were just better than us.”

Despite the loss, Coach Frey and the Lady Jets get to play against Saturday, February 5th at 1 p.m. at home against Central Georgia Tech for the SGTC Alumni/Sophomore Day game.  “We get the opportunity to correct some of those mistakes on Saturday and then we get to play three more games as we try to improve before the real season starts on February 25th and 26th in the conference final 4.  That when we will have the opportunity to redeem ourselves for this loss and the way we played,” added Frey.

Freshman point guard Luana Leite from Sao Paolo, Brazil, was the leading scorer for the Lady Jets.  She had a total of 22 points, two rebounds, three assists and two steals.  Sophomore point guard Maikya Simmons was close behind with 15 points, two rebounds and one steal.  Freshman center Fanta Gasama was the only other Lady Jet in double-digits and she had a double-double night with 10 points and 12 rebounds.  She also had three assists.

Both the Lady Jets and the Jets will be back in action at home on Saturday, Feb. 5th for the SGTC Alumni/Sophomore Day event.  The Americus-Sumter County Chamber of Commerce will be hosting a tailgate with free hot dogs and hamburgers beginning at 12:15 following by the Lady Jets against Central Georgia Tech at 1 p.m. and the Jets hosting Southern Crescent at 3 p.m.

This is also the 20th anniversary of the reinstatement of basketball at South Georgia Tech and the college will be honoring the members of the 2001 – 2002 Jets basketball team at the half-time of the Lady Jets games.  The current 2021 – 2022 Jets and Lady Jets sophomores will be honored between the two games and all alumni, faculty and staff will be recognized at the half-time of the men’s game.