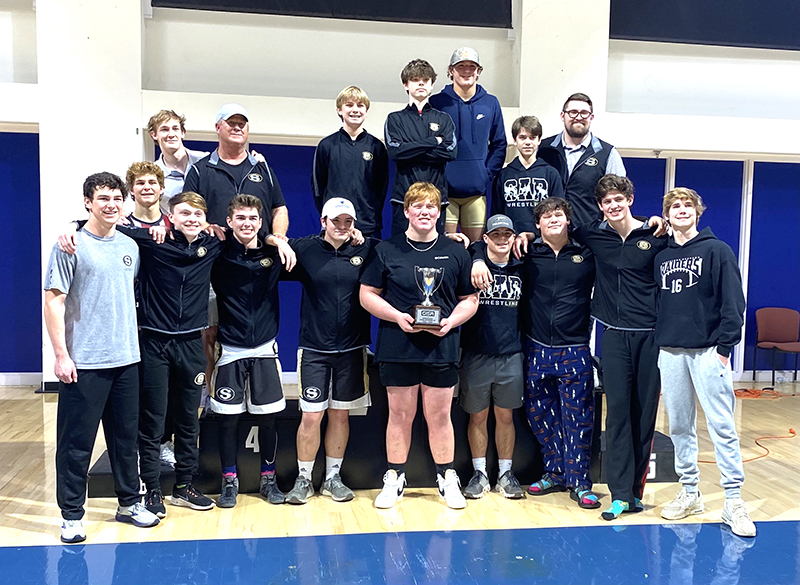 The Raiders finished as the state runners-up with 190 points and Westfield won the GISA State Championship with 235 points. SAR finished 72 points in front of Trinity Christian Academy of Dublin, GA, who finished in third place with a total of 118 points.

“Overall, they did a good job and I’m really pleased with the effort,” SAR Head Coach Mike Smith said. “We had a few matches that didn’t go our way, but that’s wrestling. Overall, we worked hard and had a great time.” 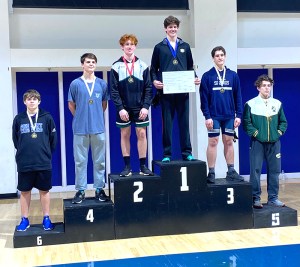 Joyner was able to wrestle his way through the tournament and reached the finals of the 182-lb. weight class, where he would face Brady Greer of Westfield for the individual state title. In that title match, Joyner was able to pin Greer to take home the state championship. “When he (Greer) locked his arms, I got a free move. You can’t do that,” Joyner said. “So then I just rolled him over and he just landed right where I needed him to and I pinned him.” According to Joyner, in the third period of the match, Greer “locked his arms”, which is something that by rule, a wrestler is not allowed to do when he is on top of his opponent. As a result, Joyner was awarded a “free move”, which allowed him to roll Greer over and pin him for the win. 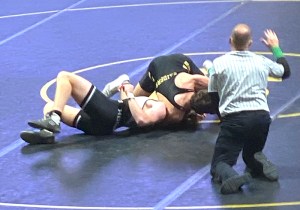 In the 285-lb. weight class, SAR senior John Saye wrestled his way to the state title match, where he would be facing Cade Beecher of Pinewood Christian Academy. Saye was also tied with fellow SAR wrestler Tanner Humphrey for the school record for most pins in a season (28). However, on this day, Saye ended up setting a new school record when he pinned Beecher to win the state championship. “It was hard work throughout the whole season,” Saye said. “I’ve wrestled that guy (Beecher) before. I just knew coming into the match what I had to do.” Saye finishes his senior year as a region champion and a state champion with an overall record of 33-2 and is SAR’s new school record holder for most pins in a season (29). 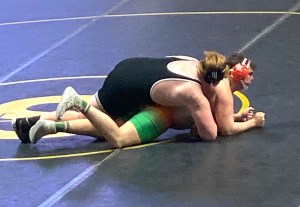 One other Raider made it to the state finals. Junior Tanner Humphrey wrestled his way through the tournament and got to the state championship match of the 132-lb. weight class, where he would face a familiar foe, Valwood’s John Del Vecchio, for the state title. At that time, Humphrey was tied with his fellow SAR teammate, John Saye, for most pins in a season (28). It was a highly competitive match that went into overtime tied at 4-4, but in the extra period, Del Vecchio was able to score two points to win the match and the state championship. Despite losing in the state finals, Humphrey was able to take it in stride. “I worked hard and had a good season. I made it all the way, but it wasn’t God’s will for me to win,” Humphrey said. Humphrey finishes the season as the state runner-up in the 132-lb. weight class and trails John Saye for the school record in number of pins in a season (29) with one more season to go. 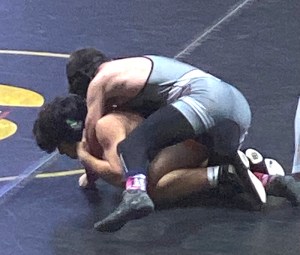 Southland Academy junior wrestler Tanner Humphrey (grey jersey) is on top of John Del Vecchio of Valwood during their state championship match in the 132-lb. weight class. However, Del Vecchio ened up winning the match 6-4 in overtime to become the state champion and Humphrey had to settle for state runner up.
Photo by Ken Gustafson 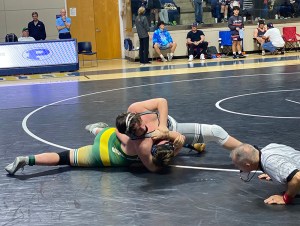 In the 220-lb. weight class, SAR junior Colby Greene very nearly fought his way into the state championship match of that division, but was beaten by Brady Greer of Westfield in the semifinals. However, Greene rebounded and won third place by defeating Bradyn Jenkins of John Milledge Academy. 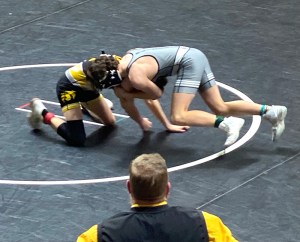 With only four seniors graduating this year, the Raiders will have more wrestlers coming back for the 2022-23 season and will try once again to win the GISA team state championship.