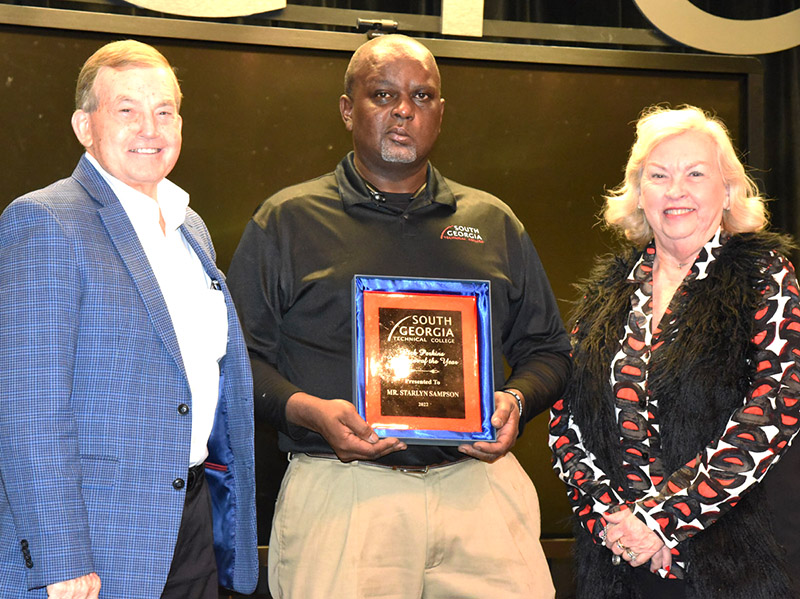 SGTC President Emeritus Sparky Reeves (left) and Allene (R) are shown above as they are presenting Sampson (center) with a check for being named SGTC 2022 Instructor of the Year. Photo by SGTC

Starlyn Sampson, Auto Collision and Repair Instructor on the Americus South Georgia Technical College campus, was recognized as the Instructor of the Year by SGTC President Dr. John Watford during a breakfast ceremony in the John M. Pope Industrial Technology Center rotunda recently.  Sparky and Allene Reeves made their gift after the announcement.

Sampson is the seventh recipient of the Sparky and Allene Reeves Instructor of the Year award.  Andrea Ingram, a Computer Information Systems Instructor, was the first recipient of the award in 2016 and Charles Christmas, an Aviation Maintenance Instructor, was selected in 2017.  Teresa McCook, the Americus campus Criminal Justice Instructor, received the award in 2018, Law Enforcement Academy Director Brett Murray was recognized in 2019, Cosmetology Instructor Dorothea Lusane McKenzie earned the honor in 2020 and Culinary Arts Instructor Chef “Ricky” Ludwig Watzlowick was named in 2021.

“This is a tremendous honor for us to be able to come back and honor the best of the best each year,” said South Georgia Technical College President Emeritus Sparky Reeves when he was presenting a donation to the Instructor of the Year.  “It is our pleasure to make this presentation to Starlyn Sampson. Students may be the lifeblood of South Georgia Technical College but our instructors are the heartbeat.  And we are thrilled to be able to give back to our top instructor and our top student each year.”

Reeves joined the South Georgia Technical College faculty in 1973 as an Accounting, Math, and Business Psychology Instructor.  In addition to teaching, he also served as a Supervisor, Evening Coordinator, Vice President of Economic Development and President.  He retired in 2015.

After accepting the stipend from the Reeves’, Sampson thanked them, and his co-workers for nominating him for this honor.  “I am very honored to be selected as the Instructor of the Year,” said Sampson.  “ I really appreciate your support of this program and all the instructors.  I will do my best to make you and South Georgia Technical College proud of me and my program.”

Dr. Watford also congratulated Starlyn Sampson.  “We are so proud of you and your accomplishments.  When I think about you, I think about these attributes.  You are knowledgeable about your subject matter. Students respect you.  You obviously have the respect of your peers because they nominated you for this honor.  You have a strong work ethic and you have a passion for your students and want them to excel.  Those attributes are make what an outstanding instructor.”

For more information about how to make a donation or establish an endowed scholarship at South Georgia Technical College, contact Su Ann Bird, SGTC Vice President of Institutional Advancement and Foundation Executive Director at 229-931-2011 or sbird@southgatech.edu.  Tax deductible donations may also be mailed to the SGTC Foundation, P.O. Box 6102, Americus GA 31709.