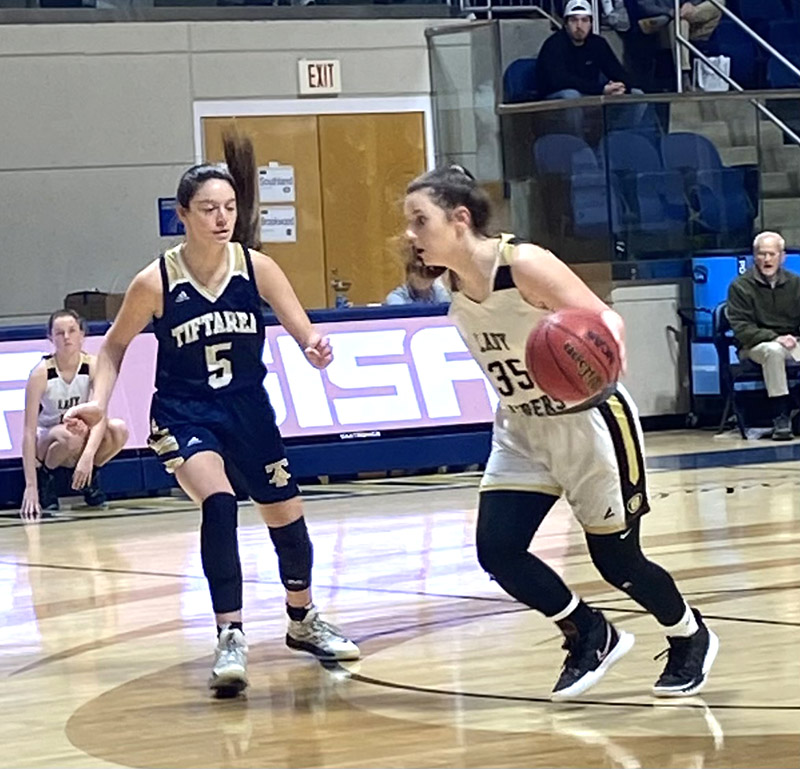 AMERICUS – The defending Georgia Independent School Association (GISA) Class AAA State Champion Southland Academy Varsity Girls Basketball Team (SAR) began its post-season quest to defend its state title at the Storm Dome against the Panthers of Tiftarea Academy (TA) in the first round of the GISA Region AAA Tournament on Tuesday, February 8. While it was a low-scoring, turnover-plagued affair with both teams struggling offensively, SAR’s defense once again was the difference. In the closing minutes of the game, the Lady Raiders came up with some defensive stops down the stretch to secure a 41-34 victory over the Panthers.

With the win, SAR has booked its spot in the Region 3-AAA Championship Game against the #1 seeded Brookwood Lady Warriors on Friday, February 11 at 7 p.m.

“It all starts with our pack line defense and once again, it kept us in the game in the first half,” SAR Head Coach Eric Israel said. “We finally started hitting some shots in the second half, like we do a lot, and it’s just an unbelievable effort by our girls. The hard work, the game planning, coming in every day for those two hour practices. It’s all about them. They put in the hard work and I’m extremely proud of them,” Israel continued.

Another major factor in the outcome of this game was free throw shooting. Both teams shot poorly from the foul line, with the Lady Raiders making 10 of 23 foul shots for the game. However, in the closing minutes of the game, the Panthers had several chances to make it a one score game, but could not hit foul shots down the stretch. They went three for eight in the fourth quarter and 5 for 12 for the game. On the other hand, Mitchell was able to make four of five free throws in the fourth quarter, which proved to be crucial in the Lady Raiders’ victory.

It was a low-scoring affair between both teams during the first quarter, but with five seconds left in the quarter, Lauren Duke scored on the inside to give the Lady Raiders a 10-9 lead at the quarter’s end. 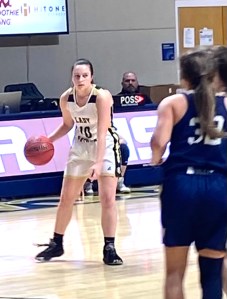 Over the first two minutes of the second quarter, both teams continued to trade baskets, but Weaver was able to tie the game at 14-14 on a layup via dribble penetration. However, having been fouled on the play, she failed to make the free throw to complete the three-point play.

Throughout the remainder of the first half, both teams tried to be patient on offense and moved the ball around the perimeter to try and find the high percentage shot, but both teams were struggling to score and were committing turnovers.

However, with 59.4 seconds left before halftime, SAR guard J.C. Bailey was fouled on a three-point attempt, but could only make one of the three free throws. Nevertheless, that ended up sparking a short 4-2 run by the Lady Raiders to close out the first half and they led 21-18 at halftime. 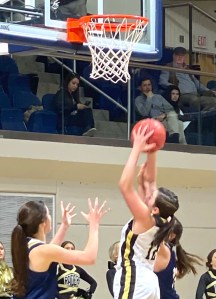 SAR got the ball to start the second half and quickly jumped out to a 24-18 lead when Mitchell scored off an assist from Weaver. Mitchell was fouled on the play and was able to make the free throw to give SAR the six-point lead. Shortly thereafter, SAR increased its lead when Jadie Burrell drilled a three-pointer from the baseline. This prompted TA to call a timeout with 6:41 left in the third quarter to stop the Lady Raiders’ 6-0 run to begin the first half.

Out of the timeout, the Panthers answered when Elli Bryan drained a three-pointer from the top of the key, but Weaver fired back with a three-pointer of her own to give SAR a 30-21 lead. Over the next couple of minutes, both teams once again struggled to score, but TA’s Ali Strenth cut the Lady Raiders’ lead to 32-24 when she drove straight to the basket and scored. During the last minute of the third quarter, both teams struggled with turnovers, but SAR went into the fourth quarter with a 33-24 lead thanks to a free throw from Ansley Weldon.

Over the first three minutes of the fourth quarter, it was a defensive struggle, as it had been throughout the game. Both teams were struggling on offense, but the Panthers cut their deficit to 35-29 when Bryan scored, was fouled and completed the three-point play. However, Mitchell responded with a three-point play of her own to give the Lady Raiders a nine-point lead again.

Once again, however, the Panthers struck back with another three-pointer from Bryan, but SAR had an answer when Burrell was fouled and made one of her two foul shots with less than four minutes to go in the game.

Then with about 3:35 left to play, the Lady Raiders’ defense struck again when Burrell got a steal and dribbled into the frontcourt before Israel called a timeout with 3:26 to go.

Then with 1:39 to go, the Lady Raiders came up with another steal. These two defensive plays down the stretch would prove to be key factors in the outcome of the game, as the Panthers were denied scoring opportunities.

With 57.1 seconds left and SAR owning a 40-32 lead, Bryan was fouled and made both free throws for TA. Then with 14 seconds left, the Panthers had another chance to cut their deficit to four with Ali Strenth at the foul line, but Strenth missed both foul shots and the Lady Raiders would go on to win by the score of 41-34.

While the Lady Raiders struggled from the foul line as a team for the game, Mitchell was able to come through in the fourth quarter by making four of five foul shots.

With the win, the Lady Raiders (13-11) will play for another region championship on Friday, February 11 at 7 p.m. As the #2 seed in the tournament, they will play the #1 seeded Brookwood Lady Warriors for the Region 3-AAA Championship.