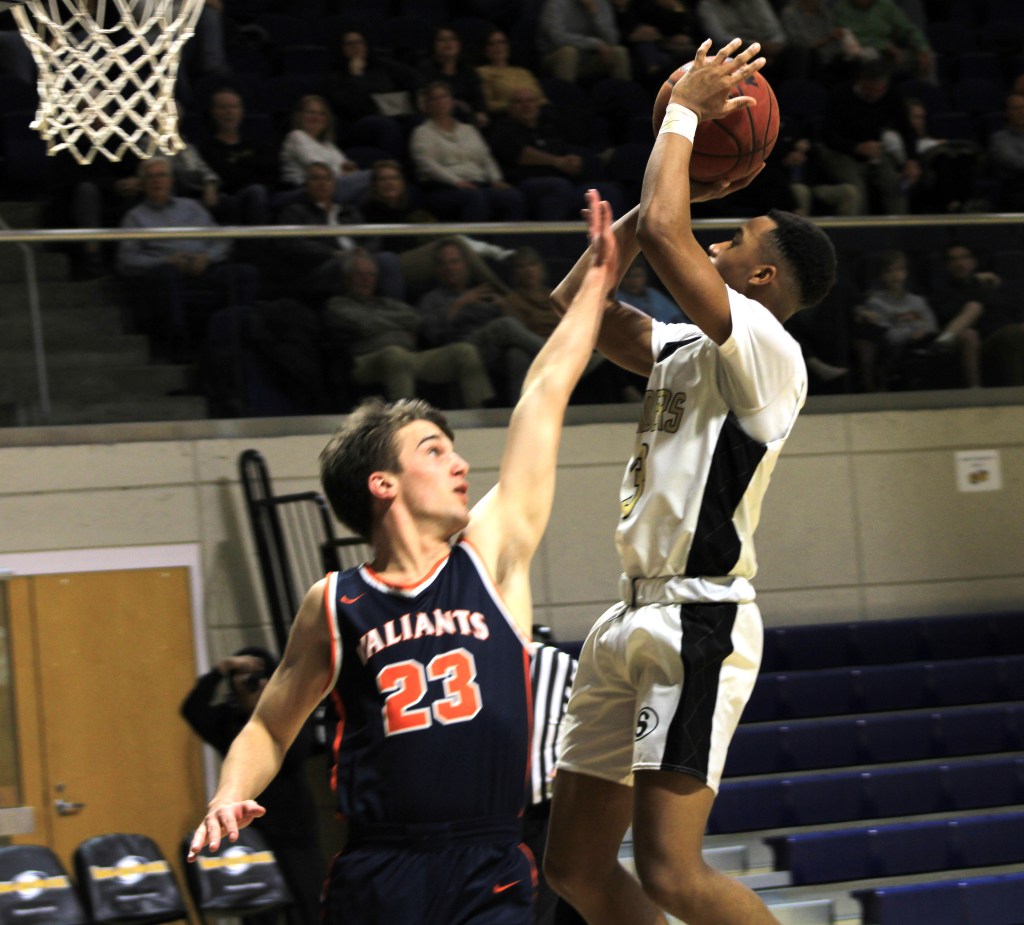 AMERICUS – After a slow start in the first half offensively, the Southland Academy Raiders used their defense to create their offense in the second half, especially in the fourth quarter. As they have done all year to other opponents, the Raiders used their solid and aggressive defensive pressure to neutralize Valwood’s offense and created numerous turnovers that resulted in points. This was none more true than in the fourth quarter, when SAR went on a 16-2 run to close out the contest and secured a 54-26 victory over the Valiants in the first round of the Georgia Independent School Association (GISA) Region 3-AAA Tournament at the GSW Storm Dome on Tuesday, February 8. 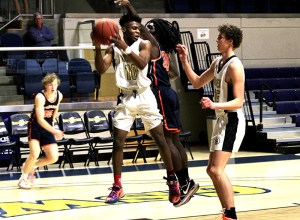 Southland Academy junior shooting guard Cedric Smith (10) scored 11 points in the Raiders’ 54-26 win over Valwood in the first round of the GISA Region 3-AAA Tournament.
Photo by Kayla Pidgins

SAR had three players score in double figures. Carlos Tyson led the Raiders with 14 points, Carmelo Volley had 12 and Cedric Smith poured in 11 in the winning cause. John Henry Crisp And Hudson Collins also chipped in six and five points respectively for the Raiders.

As for the Valiants, Nate Williams led them in scoring with 14 points and Bowen Patrick chipped in eight.

This was a game in which SAR struggled offensively in the first half and for some stretches in the second half, but the Raiders’ defense was consistently solid throughout the game and that is what enabled them to pick up their scoring in the latter part of the third quarter and in the latter stages of the fourth quarter.

After an evenly played first quarter, both teams were tied at 10-10, but Hudson Collins quickly gave SAR a 13-10 lead on a three pointer to start the second quarter. 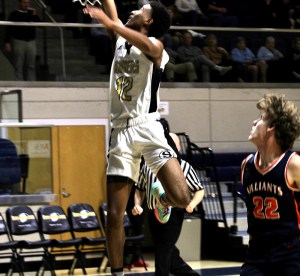 Southland Academy junior forward Carlos Tyson (12) goes up for a layup. Tyson led the Raiders in scoring with 14 points.
Photo by Kayla Hudgins

Over the next several minutes, both teams struggled offensively, even though both squads were playing a hectic, up-tempo pace. The Raiders finally got their fifth point of the quarter when Carmelo Volley scored to give SAR a 17-12 lead.

The Raiders went on a 6-0 run to start the second half and that run was capped off by a layup from Volley. Then with a little less than six minutes in the third quarter, Cedric Smith increased SAR’s lead to 28-15 on a jumper from the top of the key.

While Valwood continued to struggle offensively, partly due to SAR’s aggressive defense, the Raiders were able to score four unanswered points to take a 34-17 lead before Williams drilled a three-pointer to cut SAR’s lead to 14 points. During the last minute of the third quarter, both teams traded baskets, but SAR maintained a 38-24 lead with one more quarter to play. 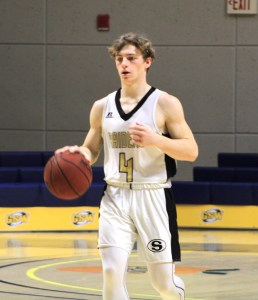 During the first two minutes of the fourth quarter, both teams were struggling offensively and with turnovers. The Raiders didn’t get their first points of the quarter until Carlos Tyson scored a layup with a little less than five minutes to play in the game. That was the beginning of a 6-2 run by the Raiders, which was capped off by a basket from Buddy Brady.

However, over the remaining minutes of the game, SAR took total control. The Raiders forced numerous turnovers and scored 10 unanswered points to close out the game and secure their 54-26 win over the Valiants.