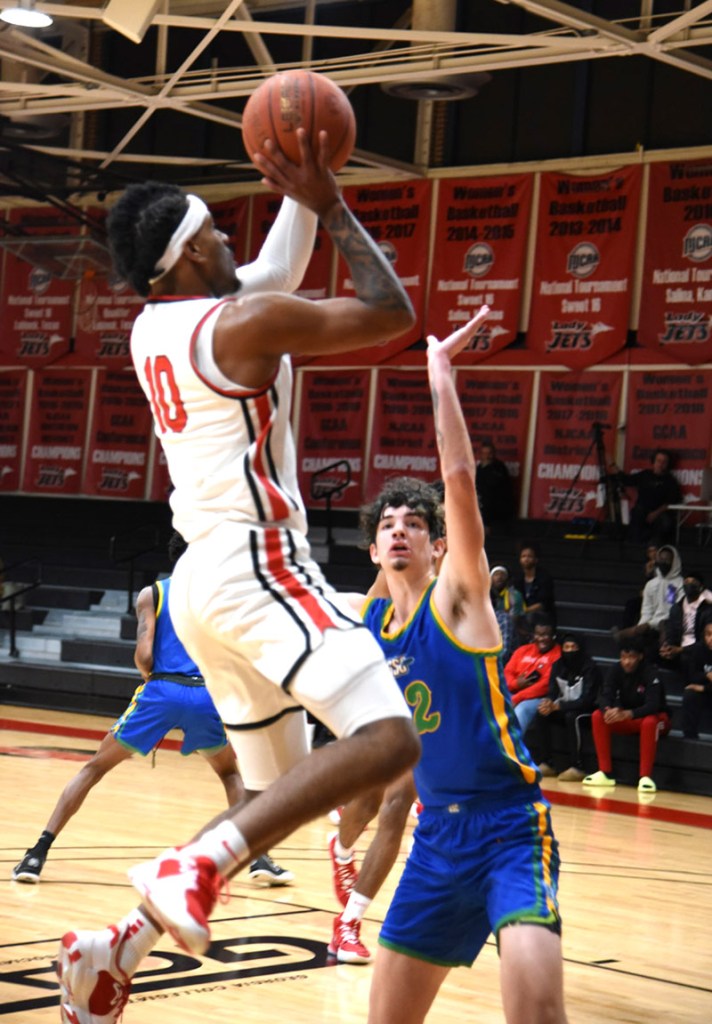 Marvin McGhee III (10) was the top scorer for the Jets with 25 points in the game against Gordon College. Photo by SGTC Athletics

AMERICUS – The South Georgia Technical College Jets took an impressive Georgia Collegiate Athletic Association (GCAA) 85 – 59 victory over Gordon College to move into a tie for second place with South Georgia State College.  The Jets are now 7 – 4 in the conference and 15 – 10 overall.  Gordan fell to 2 – 7 and 8 – 13.

Sophomore Will Johnston was the only other Jet in double digits with 11 points.  He was four of five from the field and three of six from the foul line.  He also had five rebounds, three assists and two steals. Freshman Nathan Wilson scored eight points and Jalen Reynolds and Matija Milivojevic both came up with five points.  Reynolds had a total of 10 rebounds and a blocked shot.  Milivojevic had three rebounds and blocked shot.  Closing out the scoring for the Jets was Kallin Fonescca with 3 and Justice Hayes and Bryce Turner with two apiece.

The Jets and Lady Jets travel to Albany on Saturday, February 12th for a double-header with Albany Tech.  The Lady Jets open at 1 p.m. and the Jets follow at 3p.m.  The Jets will host Central Georgia Tech at home on February 15th at 7 p.m.   There is only one more home game for the Jets or Lady Jets after that and it is on February 23th at 7 p.m. when the Jets host Andrew College.