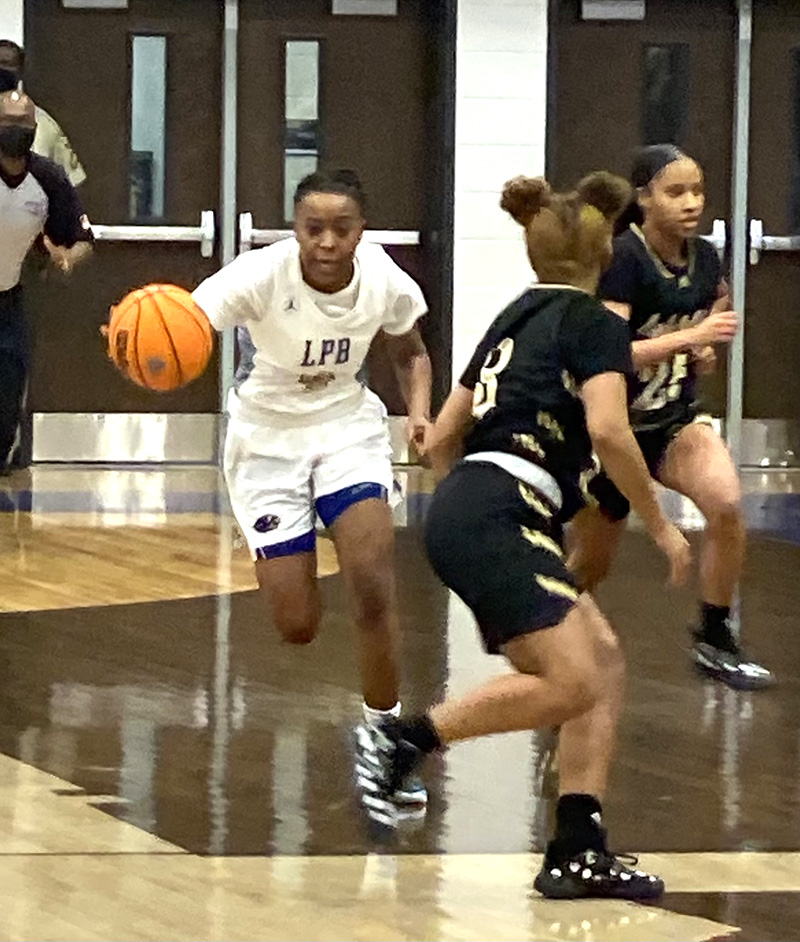 Sumter County junior guard Aviyonna Clemons (4) pushes the ball up the court for the Lady Panthers. Clemons scored eight points in the win over Mary Persons. Photo by Ken Gustafson

AMERICUS – After an extremely sluggish first half, the Sumter County Lady Panthers (SCHS) were able to pick up their offense in the second half and were able to outlast the Lady Bulldogs of Mary Persons (MPHS) by the score of 39-31 in the Georgia High School Association (GHSA) Region 2-AAA Tournament on Thursday, February 10 at Sumter County High School.

As a result of the win, SCHS (20-6) has booked its spot in the championship game of the tournament against the #2 seeded Central-Macon Lady Chargers (21-4) on Friday, February 11. In addition to the Lady Panthers’ victory, SCHS senior center Trinity Jackson hit a huge milestone in her career by scoring her 1,000th point of her career at the end of the third quarter.

Harris was also extremely pleased with the production of senior shooting guard Kaylin Holley, who played a critical role in the Lady Panthers’ success in this game. Holley drained four three-pointers and led the Lady Panthers in scoring with 14 points. Jackson was also in double figures with 11 and Aviyonna Clemons scored eight points for SCHS in the winning cause.

“She (Holley) made some big, big, big baskets,” Harris said. “It kept us a float and that’s what seniors have to do. She’s put in a lot of work the last two summers in the off-season and it’s just good to sometimes see that hard work pay off.”

As for the MPHS Bulldogs (15-12), they were led in scoring by T.T. Brown, who had nine points on three three-pointers.

The first quarter was one the Lady Panthers will want to forget. Both teams struggled offensively with scoring and with turnovers, but the Lady Panthers scored only one point the entire quarter on a free throw by Clemons. Over the first couple of minutes, neither team could put the ball in the basket until Quanesha Brown scored a two-point basket for the Bulldogs. As the quarter continued, both teams continued to struggle on offense and both teams missed several easy shots, but by the end of the first quarter, the Lady Panthers found themselves down 7-1, having scored their lowest amount of points all season in eight minutes of basketball.

Over the first two minutes of the second quarter, things didn’t change much for either team. With 5:11 to go before halftime, MPHS called timeout with an 8-2 lead. 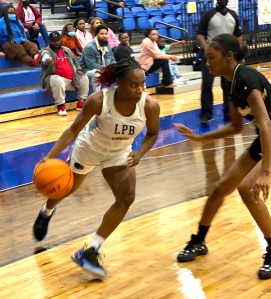 Out of the timeout, MPHS guard Miah Barkley was fouled while shooting and sank both free throws, but the Lady Panthers were finally able to knock down an outside shot when Holley nailed the first of her four three-pointers to bring SCHS within six at 8-5.

Over the nest couple of minutes, both teams traded baskets, with Holley scoring a two-pointer, but with less than two minutes to go before halftime, Holley struck again with her second three-pointer of the game and Goodman scored shortly thereafter to give SCHS a 12-11 lead. The Lady Panthers were slowly waking up from their doldrums in the first quarter and when halftime came around, they led the Bulldogs 14-11.

“That’s probably the ugliest first half I’ve seen,” Harris said. “I don’t know what it was. Maybe tightness. We got a couple of good looks at the basket. It just wouldn’t fall. We probably had eight to 12 turnovers. We just started out kind of lackadaisical, not playing our type of basketball, so hopefully tomorrow (Friday), we’ll get it going.”

Holley led the Lady Panthers in scoring in the first half with eight of her game total of 14 points.

Early in the third quarter, Holley struck for her third three-pointer of the game and Clemons would follow with a layup to give the Lady Panthers a 19-12 lead. The game was evenly played between both teams over the remaining minutes of the quarter, with both teams trading baskets. However, Holley would drain her fourth three-pointer of the game and Jackson scored her 1,000th point of her career on a bank shot at the buzzer to end the third quarter, giving the Lady Panthers a 31-23 lead.

The Bulldogs would not go away, however. They went on an 8-2 run to start the fourth quarter that was capped off by a three-pointer from T.T. Brown. However, SCHS responded with four unanswered points, including a break away layup by Jackson. This prompted MPHS to call a timeout with a little over two minutes left.

Over the final minute of play, the Lady Panthers stalled to try and run some clock, but Cornecia Luster was able to find Jackson underneath for a layup to secure a 39-31 lead for the Lady Panthers. For the remainder of the game, SCHS was able to its lead and salt away its hard-earned victory, along with a spot in Friday’s region championship game against Central-Macon.