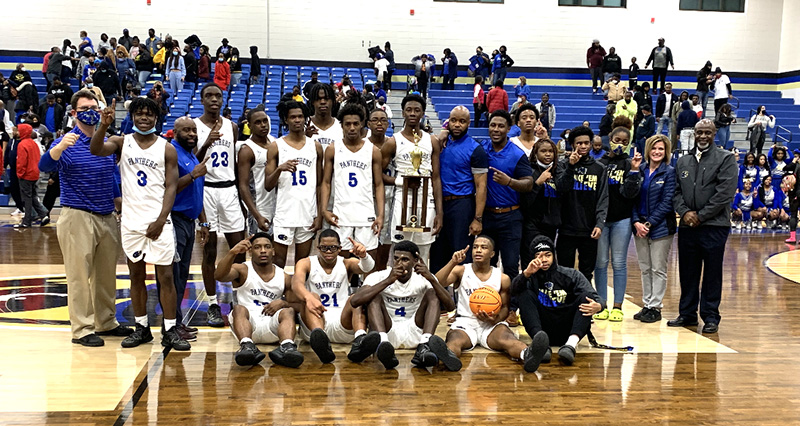 AMERICUS – Trailing Peach County (PCH) by as much as 11 points in the first half, the Sumter County Panthers (SCHS) were able to erase that deficit and would later go on a 9-0 run of their own in the third quarter. That run was the turning point of the game as the Panthers were able to make plays on both ends of the floor from then on out to secure the GHSA Region 2-AAA Championship with a 57-51 victory over the Trojans on Friday, February 11 at the Pitt Gymnasium at Sumter County High School.

With the win, SCHS improves its overall record to 25-2, while PCH falls to 16-9. As the champions of Region 2-AAA, the Panthers will be the #1 seed out of the region in next week’s Georgia High School Association (GHSA) Class AAA State Tournament. This was also a revenge game of sorts for the Panthers, as the Trojans beat them by the score of 63-54 back on January 22.

“It was a great game. Peach County is a very tough team,” SCHS Head Coach Johnny Genwright said. “The only thing I can say is that my guys stayed focused. They fought the whole game and they didn’t give up and they just kept fighting. I told them that as long as we stay in it and keep fighting and play defense, everything will work itself out.” Genwright went on to say that his team stayed off of social media for an entire week to get themselves ready for the region tournament. 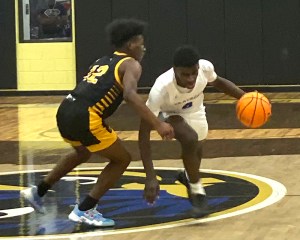 Cameron Evans led the Panthers in scoring with 14 points and both Kyric Davis and D.J. Hurley each scored in double figures with 13 points. Devon Dowdell had seven points and Brandon Pope chipped in six in the winning cause.

As for the Trojans, they were led in scoring by Temarius Mathis, who led all scorers with 22 points. Amare Johnston scored 16 points and JaCory Brooks chipped in seven. As the region runners-up, PCH will be the #2 seed out of Region 2-AAA in next week’s Class AAA state tournament.

In the first half, the Panthers fell behind by 11 to the Trojans, but SCHS went on a big run late in the half to close out the first half and only trailed PCH 34-33 at halftime.

It was a low-scoring affair during the first three minutes of the third quarter, but with 4:49 to go in the quarter, Mathis gave the Trojans a 39-36 lead on a running jumper. During this period, the Panthers were struggling offensively and Mathis would shortly thereafter score another basket, get fouled and convert the three-point play to give PCH a 42-36 advantage. This prompted Genwright to call a timeout with 3:53 to go in the third quarter to try and get his club to regroup.

However, the Trojans continued to control the game at this point and the Panthers were going cold from the field. 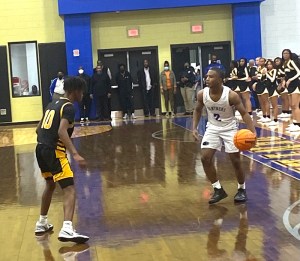 However, the momentum pendulum changed directions very quickly late in the third quarter when Kyric Davis hit a jumper to bring SCHS to within five at 43-38. It was the beginning of a 9-0 run by SCHS that was capped off with another basket by Davis shortly before the third quarter ended. The Panthers had erased a seven-point deficit and now led 45-43 with one more quarter to play.

The Panthers continued to keep their momentum going when Evans scored via dribble penetration with a little over six minutes to play in the game. SCHS was also getting it done on the defensive end, as Davis was able to block Mathis’s shot and Devon Dowdell would later score in transition to give the Panthers a 49-45 lead. SCHS continued to ratchet up its defensive pressure on the Trojans and it took PCH out of its offensive rhythm, which further shifted the momentum in favor of the Panthers. Then with 3:12 to go, Davis brought the house down with a break away dunk. As the minutes were winding down in the game, the Panthers only had a 51-47 lead, but they had most of the raucous crowd and the momentum on their side, as well as time. The Trojans, who were once in control of this game, found themselves unable to make shots against the defense of the rejuvenated Panthers.

After time was called with 1:44 to go in the game, Brandon Pope extended the SCHS lead to 53-47. Amare Johnston scored to keep PCH within striking distance, but Dowdell responded with a basket to put SCHS back up by six with a little less than a minute to go.

With 50.6 seconds left, PCH trailed 55-50 and had a chance to cut its deficit when Mathis was fouled, but he could only make one of the two foul shots. The Trojans tried to press full court on the Panthers’ next possession, but SCHS had no trouble breaking that press, as Dowdell was able to score the Panthers’ final basket of the game to secure their 57-51 victory and region title.

As the #1 seed, SCHS will host its first round game of the state tournament. Date, time and opponent are still to be determined. Stay tuned to the Americus Times-Recorder for further updates.