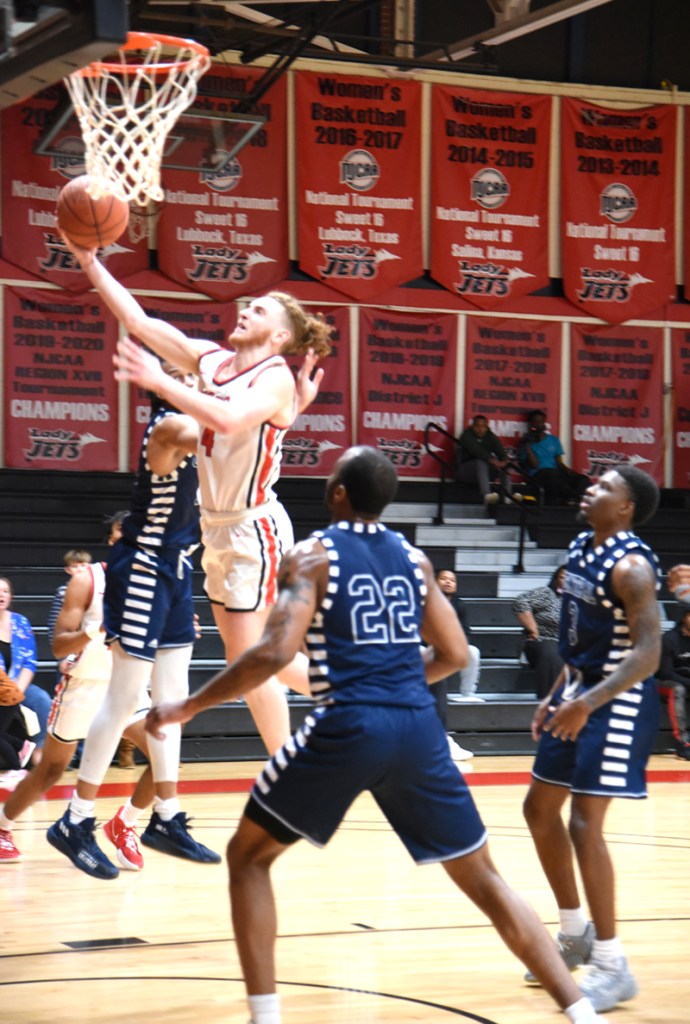 SGTC sophomore guard Will Johnston goes in for a layup against Central Georgia Tech. Johnston was the top scorer for the Jets with 16 points. Photo by SGTC Athletics

AMERICUS – Malik Battle hit a three-point shot with 1:24 remaining to allow the South Georgia Technical College Jets to come from behind and take an impressive Georgia Collegiate Athletic Association (GCAA) 66 – 65 last second victory over Central Georgia Technical College.  The Jets are now 9 – 4 and 17 – 10 overall and in second place in the conference. Georgia Highlands leads the conference with a 10 – 2 and 17 – 9 record.

“This was a great team win,” said South Georgia Technical College Jets head basketball coach Chris Ballauer.  “All nine of our guys played a part in the win.  Our team found a way to win and that is what championship teams do.  I am very proud of the guys.  Central Georgia Tech played a great game.  We were just able to pull it out at the end.”

Central Georgia Tech took the lead in the second half with 6:54 remaining. There were seven lead changes and five ties in the second half before the final buzzer sounded. Central Georgia Tech was up by as many as seven points (64 – 57) with 2:18 remaining.  Will Johnston went to the foul line for the Jets and allowed the Jets to close the gap to 64 – 63 with 2:02 on the clock.

The Jets had built up a 12-point lead mid-way through the first half but Central Georgia Tech had cut the lead to four points, 37 – 33 at the end of the first half.  The Titans outscored the Jets 32 – 29 in the second half but fell one-point shy of the victory.

Three Jets were in double digits in that game.  Will Johnston, 6’ 3” sophomore from Sydney, Australia, led SGTC in scoring with 16 points.  He also had five rebounds and six assists.  Sophomore guard Malik Battle was close behind with 14 points.  He was three of seven from the three-point line and hit three of four foul shots.  Sophomore guard Marvin McGhee, III, was the other Jet in double-digits.  He wound up with 12 points, three rebounds and two assists.

Sophomores Justice Hays and Kallin Foneseca both wound up with three points.  Nathan Wilson had two and Bryce Turner hit a free throw for one point for the Jets.

There is only one more home game for the Jets or Lady Jets after that and it is on February 23th at 7 p.m. when the Jets host Andrew College.   The Jets travel to Georgia Highlands on Saturday, February 19th before hosting Andrew College on February 23th and traveling to East Georgia State College on February 26th to close out the regular season.  The men’s NJCAA Region XVII tournament will begin March 1st with the top four teams hosting the first round and the highest seeded team remaining hosting the semi-finals and finals on March 4th and 5th.