Raiders use lockdown defense to disarm Knights in state quarterfinals 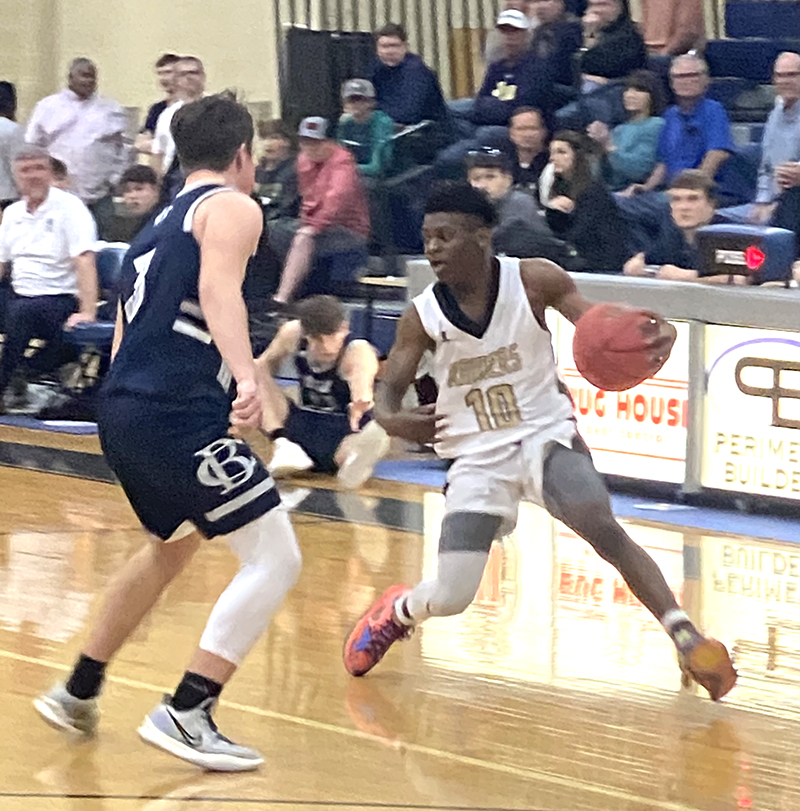 MILLEDGEVILLE, GA – The Southland Academy Raiders (SAR) did to Bethlehem Christian (BCS) what they have done to their opponents all season long. Using their pack line defense that has served them well all season, the Raiders neutralized the Knights’ offense and were able to score points off turnovers and in transition. This resulted in a 44-24 victory for SAR in the quarterfinals of the Georgia Independent School Association (GISA) Class AAA State Tournament on Saturday, February 19 at John Milledge Academy in Milledgeville, GA.

The Raiders (24-1) are now two victories away from claiming Southland Academy’s first state championship in boys’ basketball since 1983. The Raiders will face the St. Andrew’s School Lions from Savannah in the state semifinals at the friendly confines of the GSW Storm Dome on Thursday, February 24 at 5:30 p.m. The Lions (23-4) came from behind to defeat Holy Spirit Prep 53-50 in one of the other quarterfinal matchups that were held on Saturday at John Milledge Academy.

“I thought we played well defensively and I thought we played hard on the defensive end,” SAR Head Coach Rundy Foster said. “Offensively, on occasion, it’s a struggle, but we’ve got to continue to work. We are one of four teams and there ‘s something to be said for that.” 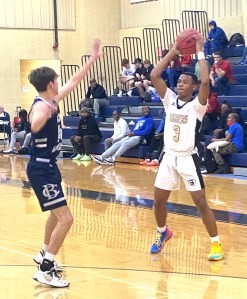 Carmelo Volley led the Raiders in scoring with 16 points and Carlos Tyson nearly cracked the double-digit scoring column with nine points. Cedric Smith poured in seven points and Buddy Brady chipped in five for SAR in the winning cause. 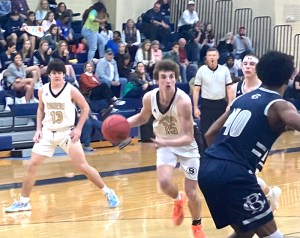 The Raiders got on the board first when Buddy Brady was fouled and sank both free throws, but Johnny Dickinson tied the game with a basket for BCS with a little less than three minutes to play in the first quarter. Tyson would later give SAR a 4-3 lead on a short jumper and Brady would follow that up with a layup via dribble penetration to give the Raiders a 6-3 lead with 1:20 left. This prompted BCS to call a timeout, but that didn’t stop the Raiders from outscoring the Knights 4-3 to take a 10-6 lead by the end of the first quarter. 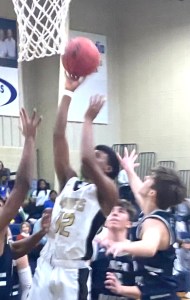 The Raiders quickly responded out of the gate in the second quarter by forcing two BCS turnovers and cashing them in with three unanswered points. SAR would later take a 15-6 lead on a basket from Cedric Smith.

On the defensive end, the Raiders continued to perform at a high level, while the Knights continued to struggle from the outside and could not penetrate the paint.

This resulted in the Knights not being able to score a point over the first three minutes of the second quarter. 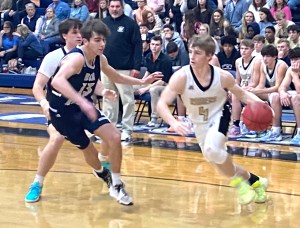 While the Raiders continued their solid play on defense, which has been their calling card all year, they continued to build their lead to 20-6 before Dickinson and Mattox Harden drained back-to-back three-pointers for BCS. This prompted Foster to call a timeout with SAR leading 20-12.

Out of the timeout, the Raiders went on a 6-4 run, which was capped off by a free throw from Brady with under a minute to go in the first half. The Knights decided to run the clock down as far as they could, but thanks in part to the SAR defense, the shot by BCS guard Timothy Doolittle at the buzzer was off the mark and the Raiders went into halftime with a 26-16 lead.

Volley led the Raiders in first half scoring with nine of his game total of 16 points.

The Raiders continued to use their strong defensive effort in the third quarter to disrupt the BCS offense. SAR forced the Knights into committing numerous turnovers and outscored BCS 7-4 to take a 33-20 lead with a little over two minutes remaining in the quarter. Then with 45 seconds left in the third quarter, Hudson Collins gave the Raiders a 35-20 lead on a layup. Mattox Harden had a chance to score a fast break layup at the buzzer for the Knights, but he came up short as the horn sounded and the Raiders maintained their 15-point lead with one more quarter to play. 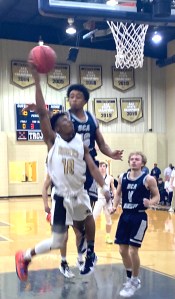 For much of the fourth quarter, it was an extremely low-scoring affair between both teams, but the SAR defense continued to stifle the boys from Barrow County, GA. During the waning minutes of the game, the Raiders were able to score baskets on the inside and via dribble penetration. With 46 seconds left in the game, Volley was able to put the icing on the cake with one of two foul shots to secure the Raiders’ 44-24 victory over the Knights and a berth in the state semifinals against St. Andrew’s.

BCS finishes its season at 18-10 and the Knights were led in scoring by Dickinson’s 10 points. 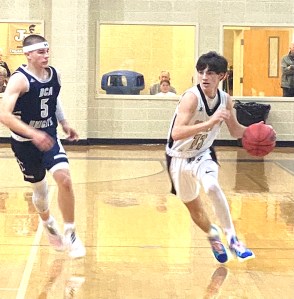