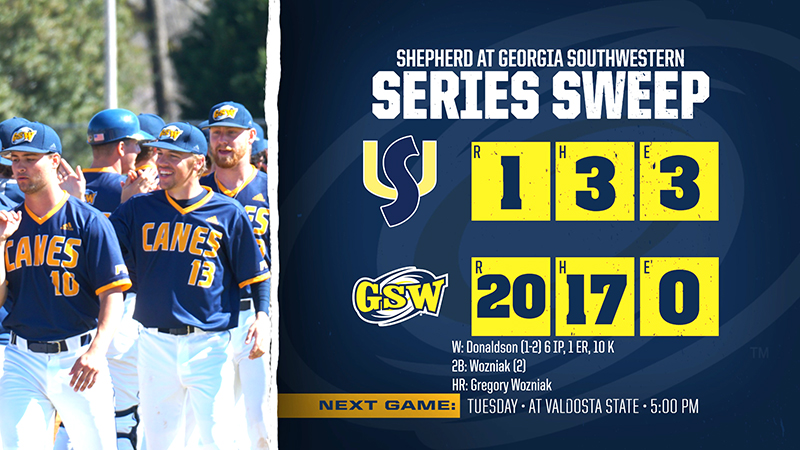 The Georgia Southwestern State Baseball Team swept Shepherd University 20-1, 4-2 and 4-3 this past weekend to improve to 4-6 on the season. Photo by GSW Athletics

AMERICUS — The Georgia Southwestern State baseball team (GSW) swept Shepherd University (SU) this weekend scoring 20 runs in the first game of the season. The series was the first meeting between the two teams and GSW’s first sweep of the season. The Hurricanes began the season with a tough slate taking on top-ranked Tampa University and a perennially solid program in Eckerd College. The Hurricanes began the week dropping a mid-week contest with Auburn-Montgomery. They bounced back quickly winning game one by 19 runs and shutting down the Shepherd University lineup in all three games. The Hurricanes held Shepherd to just six runs in all three games combined and outscored them 28-6 overall this weekend.

In Game 1, SU hit seven batters in the game and the Hurricanes got into their bullpen quickly. Sending out Antoine Crebs to pitch in Game 1 and GSW dispatched the Pennsylvania State Athletic Conference’s pitcher of the week, getting only one out in the third inning before being relieved. A nine-run sixth inning broke the game wide open for the Hurricanes. Shepherd used seven pitchers in game one pulling from the back half of their bullpen to attempt to stop the bleeding. Jared Donalson got his first win of the season pitching six innings with only one earned run and striking out ten. Gregory Wozniak drove in a total of four RBIs on a home run and two doubles and several other Hurricanes, including Reid Ragsdale, MTyler Skelton, Matthew Mamatas and Hunter Foster had multi-RBI performances in this game.

It was a much closer contest in Game 2, as it was a pitcher’s duel for the majority of the game. Once again, however, the Hurricanes found their rhythm offensively in the sixth inning and scored three of their four runs in that inning alone. Nick McCollum got the win for the Hurricanes allowing three hits in six innings pitched striking out nine. Kyle Bachle came into the game for a three-inning relief appearance, in those three innings he got nine outs, eight of those being strikeouts. Bachle struck out four straight batters twice in his three innings of work, completely shutting down Shepherd and getting the three-inning save.

John Austin Sutton drove in two RBIs to lead the GSW offense and Ragsdale had a triple in the contest.

The third and final game of the three-game series was a Sunday tilt with the Hurricanes looking to get a hard-fought sweep after starting the season 1-6. Dalton Cameron with his second appearance of the week was the starter coming off a loss on Tuesday night against the Warhawks of Auburn-Montgomery. Dalton Cameron struck out eight batters in six innings pitched allowing only one run in the ball game. That one run came early with the first three batters of the game getting on base for Sheperd University leading to a left-field single that brought the game’s first run to the plate. The Rams held on to that lead until the fifth inning when GSW did all of their damage in one inning putting up four runs in the fifth inning taking a 4-1 lead. Mike Monduy came into relieve Dalton Cameron getting the Hurricanes to the ninth inning and giving Brandt Sundean the save opportunity in a 4-3 ballgame. Sundean got the first batter to ground out, struck out the batter for out number two, and ran over to cover first, beating the runner for the final out of the series and earning his first save of the season.

Anthony Angelino led the GSW offense with a double and two RBIs.

The Hurricanes move to 4-6 on the season and will next take on Valdosta State on Tuesday night for a midweek battle versus the Blazers before heading up north to face Lenoir Rhyne for a three-game series.