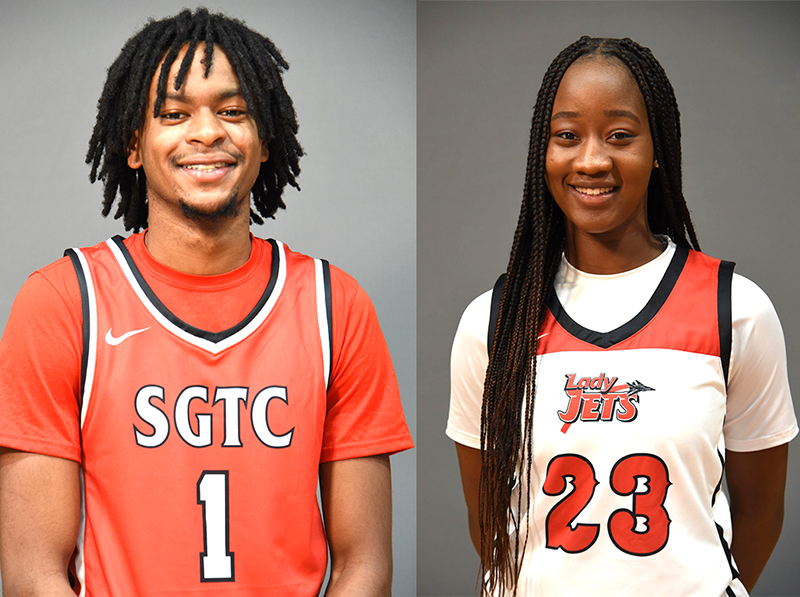 This is the second week in a row that South Georgia Technical College men’s and women’s basketball players have been singled out for the GCAA Basketball Players of the Week.  Last week, Marvin McGhee, III, and Kamya Hollingshed were selected for this honor.  It was the second time for both of them.

This is the first time this season that Malik Battle has been honored and the third time that Fanta Gassama has earned the accolades.  Gassama was first honored on December 13th and then again for the week of January 31st.  This is 11th time this season individual Jets and Lady Jets have been selected as the GCAA Players of the Week.

Malik Battle was selected as the GCAA Division I men’s player of the week after averaging 25 points, one rebound, 3.5 assists and one steal in two big wins for the Jets last week.  Gassama was selected as the women’s player of the week after she scored 22 points, 16 rebounds, one assist, one block and one steal in a win this week.  The Lady Jets are currently ranked 9th in the National Junior College Athletic Association this season and the Jets received votes to be included in the national rankings.

In addition to Gassama and sophomore Kamya Hollingshed, Alexia Dizeko, the freshman shooting forward from Switzerland has been highlighted twice.  She was selected January 17th and January 3rd.

For the Jets other players earning the honor are: Marvin McGhee, III, who has been spotlighted twice, and Will Johnston, a 6’ 3” point guard from Sydney, Australia who was nominated as a co-player of the week January 24th.

The Jets host Andrew College on Wednesday February 23rd at 7 p.m. and then travel to East Georgia State College on Saturday, Feb. 26th at 3 p.m.