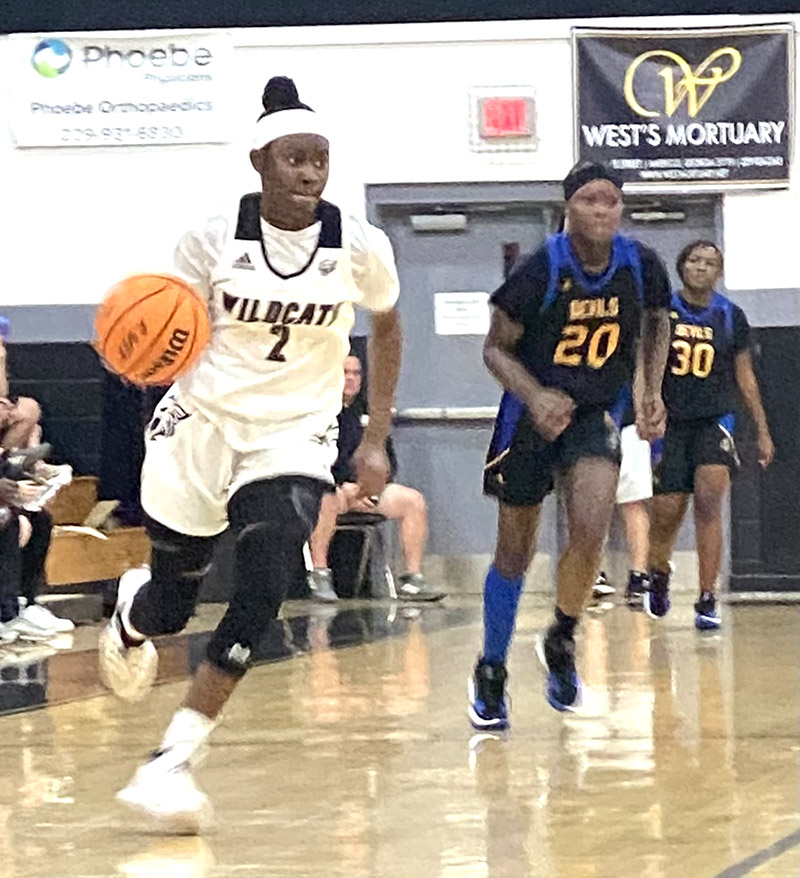 Schley County freshman point guard Jesstynie Scott (2) is about to make a bounce pass to Daneria Thornton for a layup. Scott led the Lady Wildcats in scoring with 17 points in the win over Warren County. Photo by Ken Gustafson

ELLAVILLE – The Schley County Lady Wildcats (SCHS), the #1 seed out of Region 5A-Public, wasted no time in setting the tone of the game against Warren County (WCH) in their first round game of the GHSA Class A-Public State Tournament at Schley County High School on Tuesday, February 22. The Lady Wildcats went on a 16-0 run in the first quarter and dominated the contest from then on out on their way to a 62-20 drubbing of the Screaming Devils, the #4 seed out of Region 7A-Public.

With the win, the Lady Wildcats improve to 18-4 on the season and will advance to the second round of the state tournament, while WCH concludes its season with a record of 8-16.

“Our girls came out focused. We had a game plan,” SCHS Head Coach Brent Moore said. “We thought we could come out and have a little bit of success pressing and trapping and that was the case. We ‘ve kind of found our identity and our roles a little bit and everybody played those roles tonight. Obviously, when you have #2 (Jesstynie Scott) on the court, you’re always in good hands, so jess controlled the tempo of the game and controlled our offense, as she always does. Then you’ve got Berkley Goodin and Daneria Thornton on defense. They’re always going to give 100 percent effort and try to change those turnovers into layups. We handled business and I’m really proud of the girls for their effort tonight,” Moore continued. 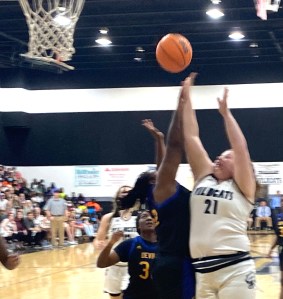 Goodin had four, Patience Solomon scored three points on a three-pointer in the fourth quarter and Payton Goodin scored two points to round out the SCHS scoring. 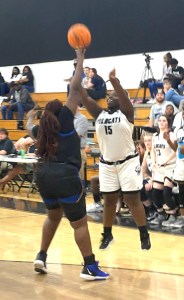 The Lady Wildcats quickly overwhelmed WCH in the first quarter by going on a 16-0 run that was capped off with a free throw by Thornton. During this onslaught, both twin sisters Lily and Emma Walker drained three-pointers and Scott hit one as well.

On the defensive end, SCHS used full-court pressure to overwhelm the Screaming Devils and scored numerous transition baskets off turnovers. The dominance of SCHS in the first half was so complete on both ends of the floor that WCH was held scoreless until the 5:22 mark of the second quarter, when Jakeria Few scored and made a free throw after getting fouled. 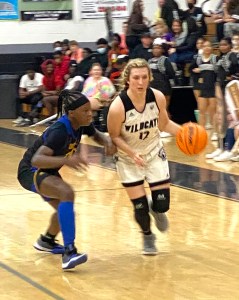 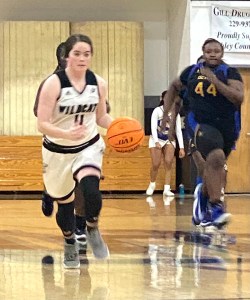 Schley County sophomore guard Emma Walker (11) pushes the ball up the court for the Lady Wildcats. Walker scored 10 points in the win over Warren County.
Photo by Ken Gustafson

Early in the second half, SCHS picked up where it left off. The Lady Wildcats continued their onslaught of WCH by going on a 10-2 run. This included a pinpoint bounce pass from Scott to Thornton for a fast break layup. As he had been doing throughout much of the game because of the large lead, Moore continued to give the younger players valuable experience, including Goodin’s younger sister, Payton Goodin, who scored two points in the contest. By the time the buzzer sounded to end the game, SCHS had a 62-20 victory.

Alecia Tucker and Ahna Thomas each led the Screaming Devils in scoring with six points. 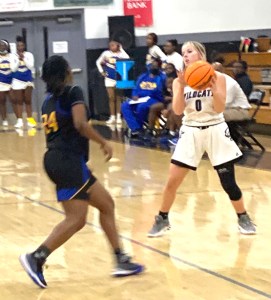 The Lady Wildcats will move on to the second round of the state tournament and will host the winner between Claxton and Pelham on either Friday or Saturday, February 25 or 26. Date ad time are still to be determined.