Lady Wildcats fall to Pelham in second round of state tournament 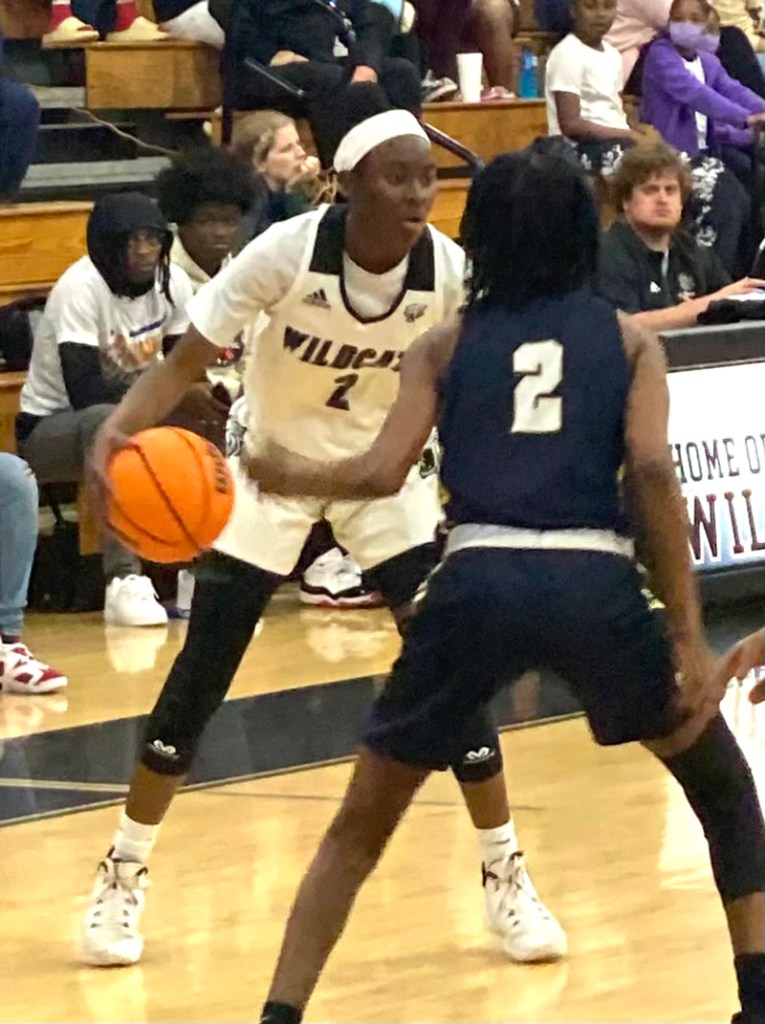 ELLAVILLE – With just a few minutes left in the fourth quarter and in their season, the Schley County Lady Wildcats (SCHS) trailed Pelham 44-30, but thanks to their tenacious defense down the stretch, the Lady Wildcats reeled off eight unanswered points to give themselves a chance in the closing moments. However, in spite of their defense forcing more turnovers to provide more opportunities to get back in the game and possibly score a tremendous come-from-behind victory, SCHS could not capitalize in the last minute and fell to the PHS Hornets 44-38 in the second round of the GHSA Class A-Public State Basketball Tournament on Friday, February 25 at Schley County High School.

With the loss, the Lady Wildcats end their tremendous season with a record of 18-5, but they conclude the 2021-22 season as Region 5A-Public champions. The 2021-22 Lady Wildcats earned the school’s first ever region championship in girls’ basketball and earned a #1 seed in the state tournament.

“First of all, it was a wonderful season. I could not be more proud of these girls for the whole team effort,” SCHS Head Coach Brent Moore said. “For these seniors (Berkley Goodin, Landry Whaley, Sarah Barnhill, Patience Solomon and Liberty Justice) to buy into our process and buy into what we believe in, that we could compete here at Schley County, I feel first of all sad that we lost tonight and couldn’t continue our run, but overall, you look at our body of work. I’m really proud of the work they put in. You’ve got to give credit to Pelham. We knew coming in that they were, depending on where you look, #3 in the state and we knew that we were going to have to bring it and credit to our girls, they did not back down. Even when we were kind of going back and forth and our shots were not falling, we did not quit. We battled back and down six, we got three turnovers. We just couldn’t turn those turnovers into points right there in the last minute or two. So we had opportunities. Unfortunately, if you are playing a great team, and I think Pelham is a great team, one or two opportunities can be the difference in the game,” Moore continued. 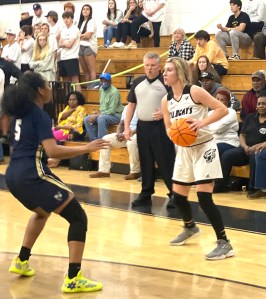 PHS (19-2) came into this game as the #3 seed out of Region 1A-Public and the #3 ranked team in the state in the Class A-Public division according to maxpreps.com. The Hornets were coming off a 54-20 thrashing of Claxton on the road in their first round game. This club was more than a formidable foe for the Lady Wildcats and they showed it with their speed, quickness, skill and athleticism.

Nevertheless, the Lady Wildcats went toe to toe with PHS and gave themselves chances to pull off a victory by creating turnovers in the closing minutes, but turnovers on offense and missed shots down the stretch kept SCHS from making the full comeback. 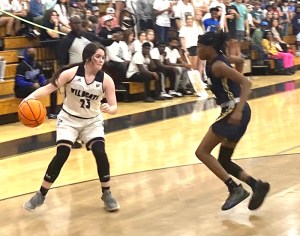 Schley County sophomore Lily Walker (#23) scored two points for the Lady Wildcats in their loss to Pelham in the second round of the state tournament.
Photo by Ken Gustafson

SCHS freshman point guard Jesstynie Scott almost single handedly carried her team and tried to will the Lady Wildcats to victory. Scott scored 23 points to lead SCHS in scoring and sophomore Emma Walker had nine points in the losing cause. Seniors Berkley Goodin, Patience Solomon and sophomore Lily Walker each scored two points to round out the Lady Wildcats’ scoring.

Things didn’t start out well for the Lady Wildcats as PHS went on an 8-0 run that was capped off by a basket from Aniyah Bennett. SCHS struggled offensively and could not score in its half court offense against the two-three zone defense of the Hornets. It wasn’t until the 1:45 mark of the first quarter that the Lady Wildcats got their first points of the game, as Scott was fouled and made both free throws. However, that was the beginning of an 8-0 run by SCHS, as Scott would tie the game at 8-8 with a layup at the buzzer to end the first quarter.

Over the first two minutes of the second quarter, both teams traded baskets, but the Hornets took a 15-11 lead on a three-pointer by Truth Wimberly. PHS would get a basket from Bennett shortly thereafter, but Scott responded with a three-pointer to put SCHS within three at 17-14. A couple of minutes later, Scott would strike again with another three-pointer, but the Hornets would have a 23-17 lead at halftime.

The first half was a half in which the Lady Wildcats tried to be patient on offense, but struggled to penetrate the PHS zone defense and could not hit shots until late in the second quarter, when Scott buried three shots from beyond the arc. Scott scored 15 of the Lady Wildcats’ 17 points in the first half.

The Hornets went on a 4-0 run to begin the second half before Patience Solomon scored on the inside for the Lady Wildcats. SCHS was still struggling to score, as PHS went to a box and one defense, but Scott came through again with 3:06 remaining in the third quarter when she drove to the basket, scored and was fouled. However, she could not convert the three-point play at the foul line and SCHS still trailed 27-21.

During this period of the game, the Wildcats were struggling to get defensive rebounds and gave up second chance opportunities to PHS. As a result, PHS guard Sariyah Chester took advantage by drilling two back-to-back three-pointers for the Hornets. Emma Walker was able to score for SCHS seconds before the end of the third quarter, but the Lady Wildcats found themselves trailing 35-25 with their season hanging in the balance. 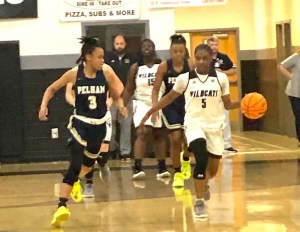 Schley County sophomore forward Daneria Thornton (#5) pushes the ball up the court for the Lady Wildcats against Pelham.
Photo by Ken Gustafson

With 7:11 to go in the game, Scott was fouled while going to the basket and made both foul shots, but SCHS continued to struggle offensively, as the Lady Wildcats couldn’t hit outside shots. While SCHS was struggling, the Hornets were pulling away. PHS went on a 9-3 run before Berkley Goodin scored on the inside for the Lady Wildcats. Fortunately for SCHS, their defense continued to force turnovers and they were able to get to within 10 at 44-34 when Lily Walker drilled a jump shot, prompting PHS to call a timeout.

However, the Lady Wildcats still wouldn’t go away. They created more turnovers and scored four more unanswered points, with Scott scoring on a layup to bring SCHS to within six at 44-38.

As the seconds were winding down to end the game, the Wildcats continued to give themselves chances to make a comeback by forcing turnovers, but they weren’t able to capitalize on the offensive end. As a result, the season for SCHS came to and end as the Hornets escaped Ellaville with a 44-38 victory in the second round.

Aniyah Bennett and Sariyah Chester each scored 14 points to lead PHS and Truth Wimberly poured in 10 in the winning cause. The Hornets will move on to the state quarterfinals and will face the winner between Commerce and Clinch County.