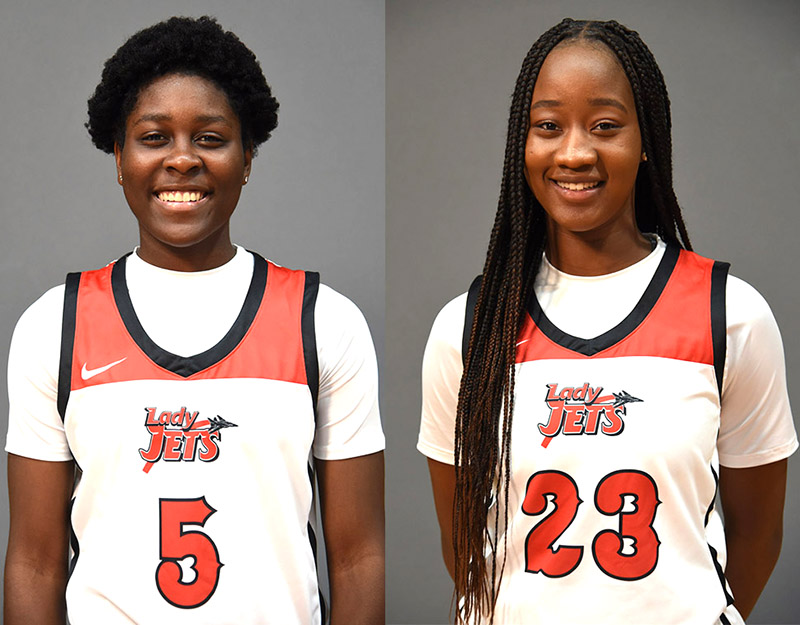 AMERICUS – Two members of the nationally-ranked South Georgia Technical College Lady Jets were selected to the Georgia Collegiate Athletic Association (GCAA) women’s Division I basketball All-Tournament team for their performance in the GCAA Division I women’s 2021 – 2022 tournament in Rome, Georgia.  The Lady Jets ended the regular season with a 26 – 6 overall record.

SGTC freshman center Fanta Gassama from Mataro, Spain, and freshman shooting forward Alexia Dizeko of Sion, Switzerland, were both named to the All-Tournament team for their on-court performances in a win over Andrew College in the semi-finals and the loss to Georgia Highlands in the finals.  The Lady Jets are currently ranked 8th in the National Junior College Athletic Association (NJCAA) and finished the regular season in 2nd place in the GCAA Division I conference and the NJCAA Region XVII tournament behind Georgia Highlands, which is currently ranked 3rd in the nation.

The two SGTC Lady Jets were joined on the All-Tournament team by Alexandra Shishkina of Georgia Highlands who earned MVP honors and O’Mariyah Tucker of Georgia Highlands, Jamya Johnson of Andrew College and Milana Holmes of East Georgia State College.

Gassama and Dizeko were instrumental in the Lady Jets 67 – 48 victory over Andrew College in the semi-final round of the tournament.  Dizeko had a total of 17 points and eight rebounds in that match-up and Gassama had 10 points and 15 rebounds.  In the 67 – 56 loss to Georgia Highlands in the finals, both Gassama and Dizeko contributed 12 points.  Dizeko also had eight rebounds and two steals and Gassama had five rebounds and two steals.

As the Region XVII champions, Georgia Highlands will host Spartanburg Methodist in the NJCAA Southern Regional Championship on Saturday, March 5th at 1 p.m. in Rome.  The winner of that game will advance to the NJCAA National Tournament at the Rip Griffin Center in Lubbock, Texas, March 16th – 21st.   The SGTC Lady Jets are hoping to receive an at-large to the national tournament.  The seedings and the at-large bids will be announced at the NJCAA Division I men’s and women’s basketball selection show on Sunday, March 6th at 7:30 p.m.

The Lady Jets have advanced to the NJCAA national tournament for the past five years and earned the right to advance to national tournament eight times since the program began in 2004.  Seven of those trips have been in the past 10 years with SGTC Athletic Director and Lady Jets’ head coach James Frey.