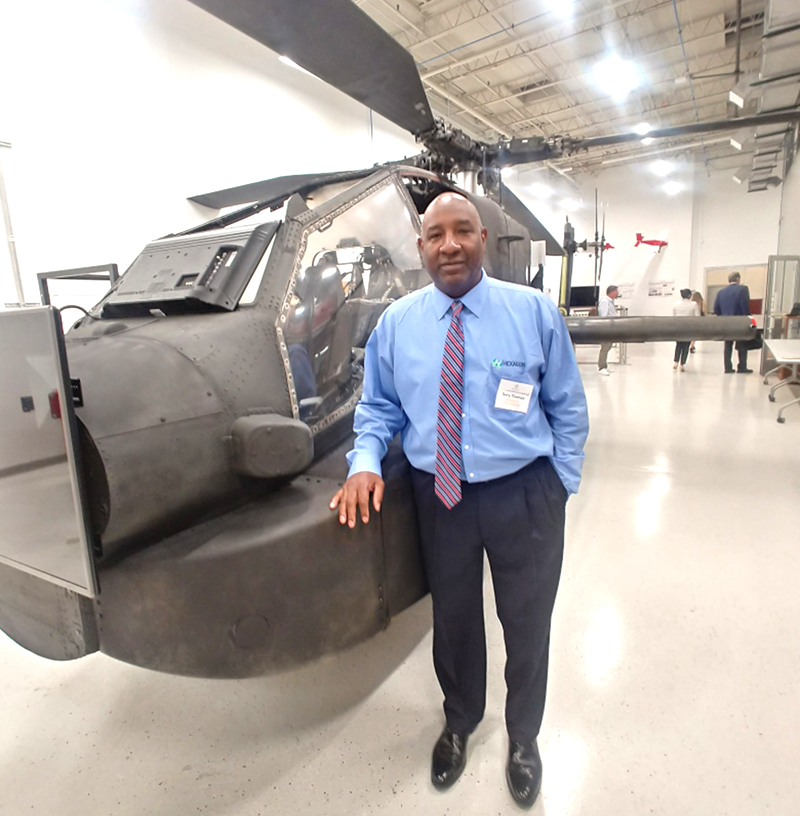 SGTC Aviation Maintenance graduate Terry Thomas is shown above. He is now working as a Senior Consultant, MSG3 Maintenance Programs at Hexagon US Federal. Photo by SGTC

AMERICUS – “Courage doesn’t always roar.  Sometimes courage is the quiet voice at the end of the day saying ‘I will try again tomorrow.’”  Mary Ann Radmacher, an American author and artist, is credited with that quote but she could have been speaking about Terry Thomas who graduated from the Aviation Maintenance Technology program at South Georgia Tech in 1985 and made a life and a living in that field for over three decades now.

Thomas is a Senior Consultant, MSG-3 Maintenance Programs at Hexagon US Federal.  He lives in Warner Robins with his wife Tracy.  They have four grown children, Krista, Bryan, Kourtny, and Justin.  He spent over 24 years working with commercial airlines before taking the position with Hexagon US Federal.

Thomas was one of the first Black graduates from the South Georgia Tech Aviation Maintenance program that went on to earn his Federal Aviation Administration (FAA) Airframe & Power Plant (A&P) license.  Over three dozen Black students had enrolled in the program in the late 1960’s and 1970’s but only a handful had graduated and become FAA licensed A & P mechanics.  A & P mechanics are licensed to work on and maintain the external (airframe) and engine (power plant) parts of an aircraft.

“South Georgia Tech and its aviation program was the key to my success in this business,” said Thomas.  “Coming to South Georgia Tech was a pivotal moment in my life and it got me off to a good start.  I still have a piece of an airplane part that we made in class hanging on my wall at home along with a photo of when I got promoted.  This place taught me how to work on aircraft and I am very grateful for my time there.”

Thomas originally had plans to enter Marines after he graduated from Perry High School.  But fate intervened in the form of a caring high school counselor who encouraged him to visit South Georgia Tech before making up his mind.  “She set up the visit and I can still remember my parents and me driving up to South Georgia Tech for the tour.  After that I was hooked and the rest is history.”

Fast forward to graduation day.  “I was walking through the aviation hangar with my cap and gown on and I remembered early on in the program that same instructor told me I probably wouldn’t make it,” said Thomas.  “I can’t explain the feeling of achievement I felt because I had made it.  I promised my mother (Wheeler Thomas) and father (Elmer Thomas) I would finish and I did.

Thomas credits his mother and father for being his inspiration.  “They taught me not to let people keep me from doing what I wanted to do.  I knew I wanted to register for these classes and once I showed my determination to continue, everything was great,” said Thomas.

In fact, Thomas believes that it may have been the desire to prove that instructor wrong along with a little push from his parents that drove him to excel.  “My grades were not the best,” said Thomas.  “I was a typical teenager that was away from home for the first time.  I remember one day, the Academic Dean (Harold Moore) called me into his office and said ‘Mr. Thomas I am going to have to call your parents because your grades have slipped.’  My dad told me to get it together and that got my attention. From that point on, I made sure that I did what I had to do to keep him from contacting my dad again,” laughed Thomas.

Thomas fondly remembered some of his classmates and how they helped him though.  He also had high words of praise for instructor Frank Gassett.   “Mr. Gassett was tough but fair.  He basically took a kid that thought he knew everything and helped me grow up. It was because of him and his connections that I had the opportunity to interview with Atlantic Southeast Airlines before I graduated.”

Thomas was hired by Atlantic Southwest Airlines, which was a commuter airline for Delta.  He worked as an Airframe and Powerplant Mechanic.  “I had always thought I would go back home and work for the Warner Robins Air Force Base after graduation,” said Thomas.  “But once I was offered the job with Atlantic Southeast I took it.  I found that I really liked working for the commercial airlines and stayed with that industry for over 25 years (1985 – 2010).

“During this time is where I seem to remember having the most fun during my career,” continued Thomas.  “Though hard work and dedication, I had acquired the qualifications to ‘run/taxi’ over seven different types of commercial aircraft at all airport locations throughout ASA’s area of operation.  This included navigating and taxing all over our own busy Atlanta Hartsfield International Airport.”

Thomas started with Atlantic Southeast Airlines which later became Express Jet.  He worked his way up to Aircraft Fleet Manager and Director of Maintenance Planning.  He also worked with Bombardier as a Quality Inspector (7 years 2010-2017) before joining Hexagon U.S. Federal in 2017 where he is an MSG3 Maintenance Planning Consultant.

Thomas give credit for much of his success to South Georgia Tech.  “Everything started at South Georgia Tech.  I got a valuable education that led to a rewarding career.  But I also enjoyed college life.  I lived in the dorms, played intramural sports, competed in student activities and good along well with my classmates.  It was a great experience even though it started off a little rocky.”

His quiet determination stood the test of time as one of only a handful of black Americans to complete the rigorous two-year program.  Thomas is very thankful for the lessons he learned.  “I remember in one class we had to tear down and rebuild an aircraft engine.  To pass, it had to start and run.  When my engine started, there was a tremendous feeling of accomplishment and pride in the knowledge I had gained,” said Thomas.

The aviation maintenance field is an excellent career option.  Thomas hopes that his experiences and success will help motivate others to consider South Georgia Tech and a career in Aviation Maintenance.  SGTC is the oldest continuous aviation maintenance training facility in the nation.  The grounds that SGTC now stands on was a World War I and World War II aviation training base.  That tradition continued when it became a career and technical training school in 1948.

Today, South Georgia Technical College’s aviation maintenance program is housed in the Griffin Bell Aviation Technology Center.  Students have the option to pursue a career in Aviation Maintenance, Avionics, and Aircraft Structural Technology.  There are currently six instructors and SGTC provides the testing facilities for the FAA A & P license exams.

For more information about enrolling in one of the aviation programs, contact SGTC Admissions Director Candie Walters, cwalters@southgatech.edu or 229-931-2299.  Aviation Maintenance is a Hope Career Grant high demand program for Georgia residents.  Other financial aid is also available.