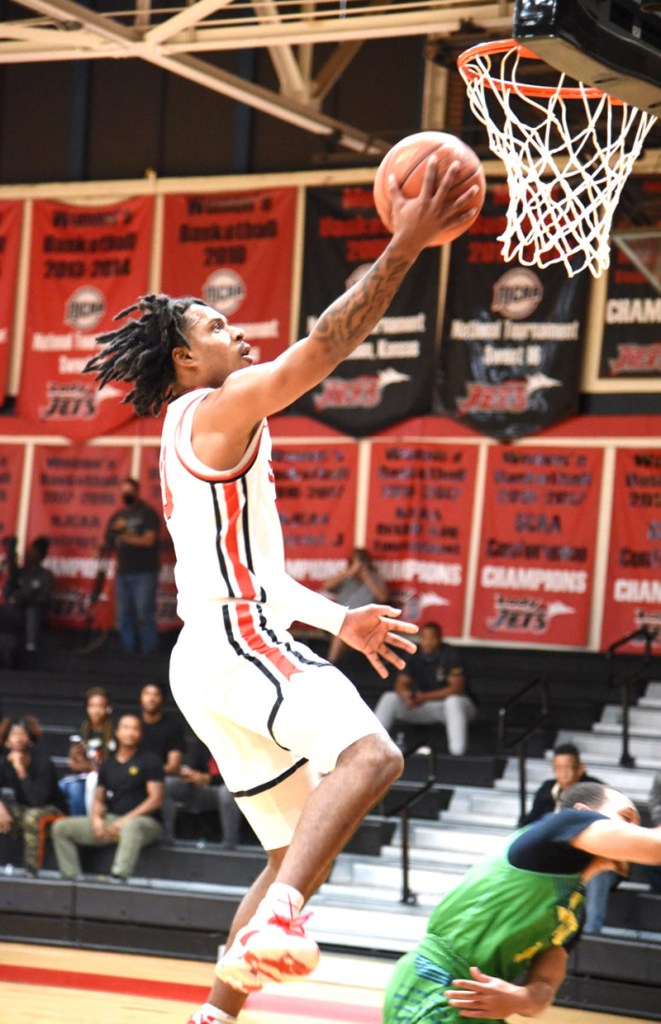 AMERICUS – The South Georgia Technical College Jets earned the right to advance to the NJCAA Region XVII tournament semifinals with an 89 – 76 win over the Southern Crescent Tigers in the quarterfinal round of the tournament Tuesday night in the Hangar.

The Jets are now 20 – 11 on the season and ranked second in the GCAA regular season standings.  They will face the third seeded South Georgia State College Hawks in a semi-final game in Rome, GA at 6 p.m. on Friday, March 4th.  Top-ranked Georgia Highlands will match-up against Albany Tech in the 8 p.m. game at Georgia Highlands in Rome.

South Georgia State defeated Central Georgia Tech 75 – 58 in Waycross in a quarterfinal game. Albany Tech upset East Georgia 72 – 66 to advance to the semi-finals and Georgia Highlands took a 79 – 68 win over the eighth-ranked Gordan State team to advance.  The winners of the semi-final rounds will advance to the finals on Saturday, March 5th at 3 p.m. at Georgia Highlands gym in Rome.  The winner of the tournament will earn the right to advance to the NJCAA National Tournament in Hutchinson, Kansas, March 14 – 19.

“I am really excited for the guys,” said SGTC Jets head basketball coach Chris Ballauer.  “To win your final game at home is special for the sophomores but we know in order to keep playing we have to keep winning.”

Ballauer said even though is team got the victory, the “played in spurts.  Going forward we have to play 40 minutes with no letting up.  We are excited to be playing a very good South Georgia State team.  It should be a good game!”

South Georgia Tech and South Georgia State met in the NJCAA Region XVII semi-finals last season in Waycross.  The Hawks captured a 73 – 67 decision to advance to the finals where they defeated East Georgia State College 75 – 69 for the right to compete in the NJCAA Division I men’s basketball tournament in Hutchinson, Kansas.  The two teams have met twice this season and split.  The Jets won in Americus 86 – 85 in January and the Hawks won 73 – 71 in February in Waycross.

Sophomore guards Marvin McGhee, III and Malik Battle scored 19 and 18 points respectively to lead the Jets to the 89 – 76 victory over Southern Crescent.  The Jets were up by as many as 21 points in the first half and were up 59 – 35 at the end of the first 20-minutes of play.  The Tigers roared back in the second half and cut that lead to six points with about eight minutes left in the game.  South Georgia Tech rallied and managed to secure the 89 – 76 victory.

McGhee led the charge for the Jets with 19 points including three of six three-pointers.  He also had one rebound, four assists and one steal.  Malik Battle hit four of nine three pointers and secured 18 points.  He also had three rebounds and four assists.

Three other Jets were in double figures to present a balanced scoring attack.  Sophomore guard Will Johnson had 16 points, five rebounds, four assists and six steals.  Sophomore center Jalen Reynolds and Freshman forward Nathan Wilson both contributed 11 points.  Reynolds had 11 rebounds, and three blocked shots while Wilson had one rebound and one blocked shot.

Rounding out the scoring for the Jets was Matija Milivojevic with nine points and six rebounds, two assists, a blocked shot and two steals.  He was followed by Justice Hayes and Kallin Fonecca who closed out the scoring with three points each.