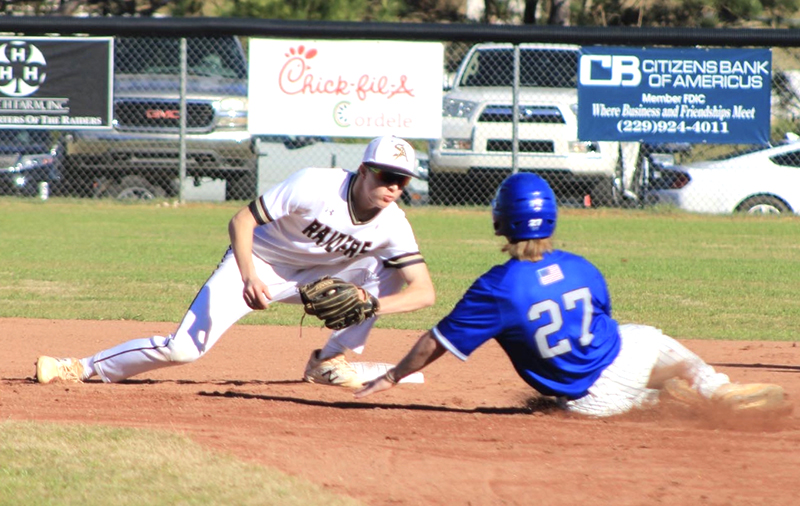 Southland Academy shortstop Henry Johnson tags out a TCS runner attempting to steal second base in the Raiders’ 10-7 victory over Trinity Christian School to open the 2022 season. Photo by Kayla Hudgins

AMERICUS – the Southland Academy Raider baseball team (SAR) got its season started off on a positive note with a 10-7 victory over Trinity Christian of Dublin, GA (TCS) on Tuesday, March 1 at Southland Academy.

The Raiders scored 10 runs on 11 hits and took advantage of two errors committed by the Crusaders.

SAR infielder Greer Hagerson spearheaded the Raiders’ offensive attack by going 3 for 4 at the plate with a double, two singles and three runs scored. Shortstop Henry Johnson, centerfielder Caleb Law and catcher Will Godwin also had multi-hit performances in this game for SAR. Johnson went 2 for 4 with three RBIs, Godwin went 2 for 3 with a double, a single and one RBI and Law went 2 for 4 with two RBIs and a run scored. 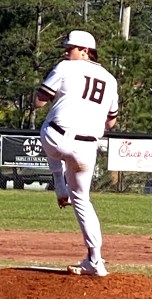 The Raiders scored three runs in the bottom of the second inning to take a 3-0 lead. Hagerson led off the frame by reaching on an error and Scout Luvin would later drive home Hagerson on a sacrifice fly for the first run of the game. After a single by Law and a walk to Hudson Collins from TCS starting pitcher Nathan Sumner, Henry Johnson drove in Law on an RBI single. Chase Ledger then drew a walk to load the bases and Usher drove in Collins when he was hit by a pitch. 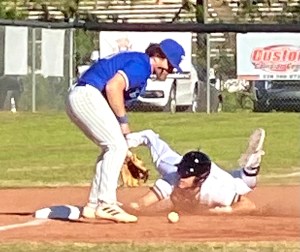 Southland Academy infielder Greer Hagerson slides safely into third base for a triple. Hagerson went 3 for 4 at the plate with three runs scored to help lead the Raiders to victory.
Photo by Ken Gustafson

TCS still wouldn’t go away, however, as Kyle Currie drove in a run on an RBI triple and Zack White followed that up with an RBI single in the top of the fourth inning, making the score 6-3 in favor of the Raiders.

However, SAR countered with two more runs in the bottom of the fourth. With two outs, Hagerson singled, Godwin drew a walk and Luvin reached on an error to load the bases for Caleb Law. Law then took advantage by driving in Hagerson on an RBI single. Hudson Collins then took one for the team, as he was hit by a pitch that allowed courtesy runner Travis Pennington to score from third, making the score 8-3 SAR. 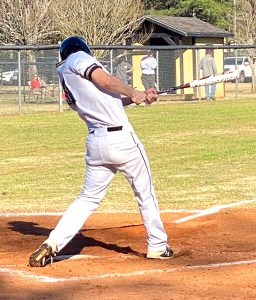 Southland Academy center fielder Caleb Law went 2 for 4 at the plate with two RBIs and a run scored in the Raiders’ 10-7 victory over Trinity Christian to begin the 2022 season.
Photo by Ken Gustafson

The Crusaders responded with two runs in the fifth and one in the sixth to close the gap to 8-6, but SAR got the two insurance runs they needed in the bottom of the sixth. With runners on second and third with one out, Caleb Law grounded into a fielder’s choice that allowed Pennington to score and Luvin would later score on a wild pitch. The Crusaders threatened in the top of the seventh when Hagerson walked in a run with two outs, but he was able to get Ben Helton to line out to center field to end the game.

Kyle Currie led the Crusaders’ attack by going 3 for 4 at the plate with an RBI and a run scored. With the loss, TCS is now 4-1 on the season.

The Raiders (1-0) will try for their second straight win when they travel down to Albany to take on Deerfield-Windsor on Thursday, March 3 at 6:30 p.m.