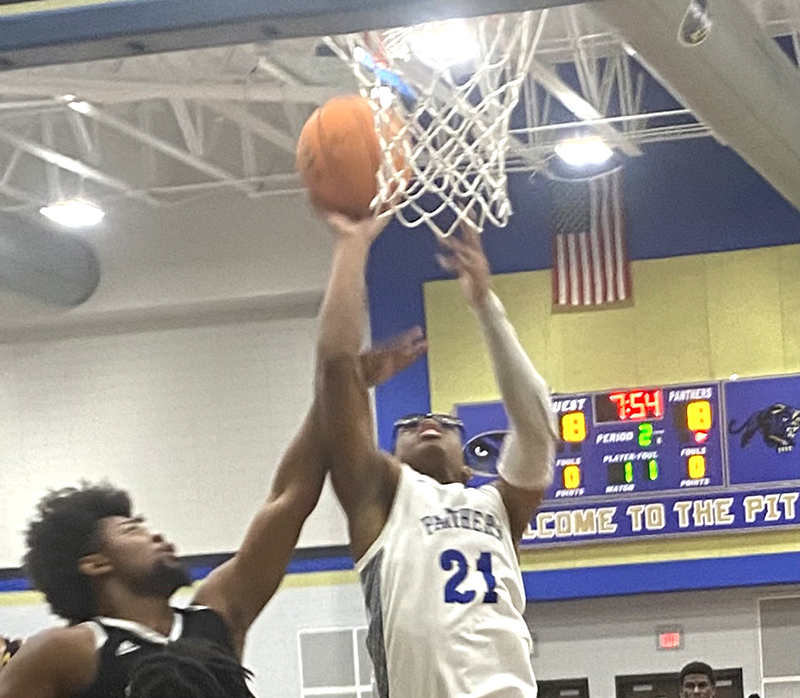 AMERICUS – Having seen the Lady Panthers fall to Westminster in the girls’ GHSA Class AAA state quarterfinals, the Sumter County boys’ basketball team (SCHS) was hoping not to suffer the same fate when they tipped off against Windsor Forest (WFH) in the Elite Eight of the GHSA Class AAA boys’ state basketball tournament. The game was a close, low-scoring contest throughout, but the defense of the Knights, coupled with the Panthers’ inability to make shots down the stretch, as well as turnovers, proved to be fatal for SCHS as they would go on to lose to WFH 47-41 on Wednesday, March 2 at the Panther Pit on the new Sumter County High School campus.

With the loss, the Panthers end their season with an overall record of 27-3, while WFH (22-5) continues on to the GHSA Class AAA state semifinals.

“They (WFH) are a great team. They played hard and they fought and they kept playing,” SCHS Head Coach Johnny Genwright said. “We just didn’t make shots right there at the end. We missed a lot of easy baskets and we weren’t able to get rebounds and loose balls and they just kind of sealed the deal.” 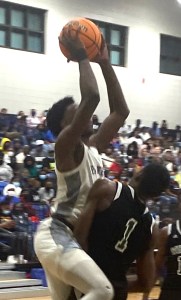 In spite of the loss, Genwright expressed his tremendous pride in what the Panthers accomplished this year. “It was a wonderful season. I’m happy with my guys. They played hard,” Genwright said. “They had a lot of big games. They went to Marietta and won a tournament. They won the region tournament. They kept on fighting. In close games, they knocked it down and they just stuck together. We learned. We live and we learn. We’ve got a great family.” 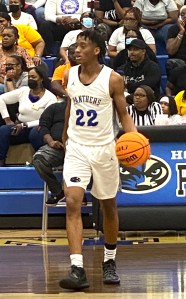 Sumter County junior guard Brandon Pope (22) led the Panthers in scoring with 13 points in their loss to Windsor Forest in the state quarterfinals.
Photo by Ken Gustafson

Brandon Pope led the Panthers in scoring with 13 points and Davis poured in 10 in his final game as a Panther. D. J. Hurley scored six points on two three-pointers and Devon Dowdell had four in the losing cause. Ty’quan Robinson, Canaan Jackson, Cameron Evans and Anthony Tyson each scored two points to round out the SCHS scoring.

The first quarter was evenly played between both teams, with the score tied at 18-18 at the end of the quarter. Early in the second quarter, the Panthers thought they made a great defensive play when Kyric Daivs went up and blocked a WFH player’s shot, but the referee ruled that it was goaltending and the Knights had a 20-18 lead.

Donte Dorman would later drain a three-pointer to give the Knights a 23-18 lead, but the Panthers responded with a 6-3 run to end the first half. That run was capped off by a basket from Davis near the end of the first half and the Panthers were only down 26-24 at halftime. 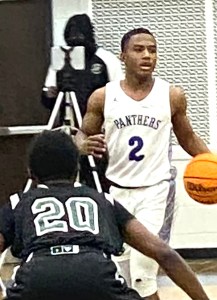 Early in the third quarter, Davis tied the game at 26-26 when he scored on the inside, but over the next couple of minutes, both teams struggled offensively and the score didn’t change until Abasi Scott scored on the inside to give the Knights a 28-26 lead.

In spite of the Panthers’ struggles on offense, their defense was solid during this period of the game, but that did not prevent Keane Carter from knocking down a three-pointer to give WFH a 31-28 lead with about three minutes left in the third quarter. 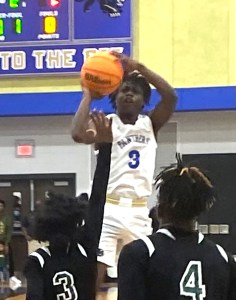 However, SCHS had a response. During the final minutes of the third quarter, the Panthers went on a 6-3 run that was capped off with a basket by Canaan Jackson on the inside. Jackson was fouled on the play and didn’t make the free throw, but the Panthers had gotten the crowd back in the game and led the Knights 34-33 with eight more minutes to play.

Over the first two minutes the fourth quarter, both teams traded baskets, but both teams were slowing the tempo down and being patient on the offensive end. However, Scott would drill a three-pointer to give the Knights a 40-36 lead. Fortunately for the Panthers, they had a response as Davis drove in and scored to cut the SCHS deficit to two at 40-38, but with 1:35 to go in the game, Dorman sank two foul shots to put the Knights back up by four.

On the Panthers’ next possession, the Knights came up with a big defensive play and capitalized at the other end when Dorman scored to give WFH a 45-38 lead. This prompted Genwright to call a timeout with 1:09 to play. 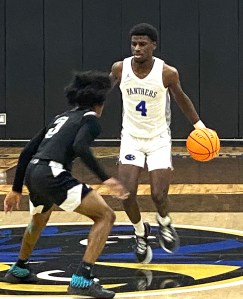 However, out of the timeout, Brandon Pope gave his teammates and the SCHS fans a ray of hope when he drilled a three-pointer from the top of the key with a defender in his face. The Panthers were down 45-41 with 52.8 seconds left, but they still had a chance.

After a timeout was called by WFH, the Panthers fouled Scott and sent him to the line, but he would make both foul shots to put WFH back up by six at 47-41. With 32.3 seconds left, Evans drove into the paint for a layup to try and keep his team alive, but his shot fell short, as did the Panthers’ attempt at a come-from-behind victory.

D’Ante Bass led the Knights in scoring with 20 points, Scott had 11 and Dorman chipped in 10 points for WFH in the winning cause.

The Knights will advance to the GHSA Class AAA State Semifinals at Georgia College in Milledgeville this weekend, where they will take on the winner of the quarterfinal matchup between Johnson-Savannah and Thomson.