Jets and Lady Jets both advance to NJCAA National Tournaments 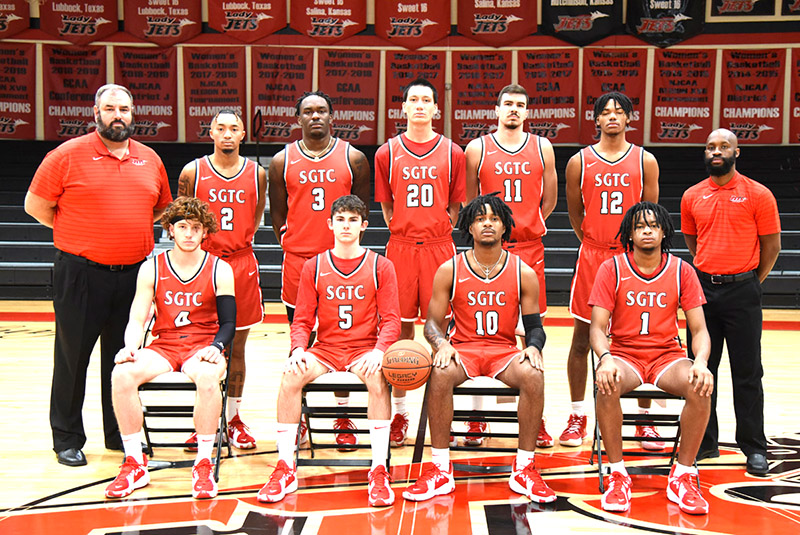 The SGTC 2021 – 2022 Jets are national tournament bound. They are headed to the NJCAA Men’s National Tournament in Hutchinson, KS as a result of their 87-84 overtime victory over Georgia Highlands College in the finals of the GCAA Men’s Basketball Tournament. Shown on the front row are: Will Johnston (4), Kallin Fonseca (5), Marvin McGhee (10), and Malik Battle (1). Standing (l to r) are: head coach Chris Ballauer, Justice Hayes (2), Jalen Reynolds (3), Nathan Wilson (20), Matija Milivojevic (11), and Bryce Turner (12), along with assistant coach Jaren Harris. Photo by SGTC Athletics

AMERICUS – The South Georgia Technical College Jets and Lady Jets basketball teams will both be advancing to the National Junior College Athletic Association (NJCAA) Division I basketball tournaments.  This is the second time in the 20-year history of the Jets basketball program that both teams have earned a national tournament bid.  It is the 12th time in 20-years that SGTC teams have advanced to the National Tournaments.

The 19th seeded Jets are headed to the historic Hutchinson Sports Arena in Hutchinson, KS, March 14th – 19th.  This is the 75th anniversary for the men’s basketball tournament.  The Lady Jets received an at-large bid and a ninth-place ranking in the NJCAA Division I women’s tournament which will be played at the Rip Griffin Center in Lubbock, TX March 16th – 21st.

“This is really special for me because I coached both of them in college (Ballauer and Harris) and now have seen them grow in our profession and have great success.  I think the men got a good draw and I will be excited to get out there and play well.  They deserve this opportunity and I am glad they played their way out there,” said Frey. 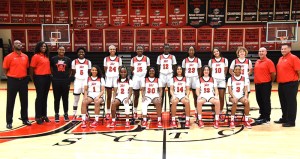 Coach Frey then added, “it is always an honor to have a chance to play for a national championship.  I never take this for granted.  I am thankful to our coaches and players for the work they have put in to get to this point.  For me as their coach it’s about much more than just going anymore.  We must go win games.  Getting there isn’t the objective for this program any longer, winning is.”

The NJCAA National Tournament Selection Shows were broadcast Sunday night.  Both the Jets and Lady Jets and supporters were in the John M. Pope Center to watch the selection process on the big screen.  The Jets qualified for the NJCAA Men’s Division I National Tournament after defeating Georgia Highlands in Rome, Saturday in the GCAA Tournament.  They will represent Region XVII as the Southeast District Champions as the 19th seed in the tournament.  They will open up against South Plains of Texas, the 14th seed, on Tuesday, March 15th at 10 a.m. CT.  The winner of that game will take on the 3rd seed Kilgore College on Wednesday, March 16th at 6 p.m.

The Lady Jets received the very first at-large bid in the NJCAA women’s selection show and were ranked 9th in the country.  They will play on Wednesday, March 16th at noon CT.  They will match-up against the 24th ranked Monroe College Mustangs.  SGTC defeated Monroe College 58 – 47 November 20th at the Tallahassee Community College Classic in Tallahassee, FL.  The winner of the Monroe – South Georgia Tech game will advance to the next round to face 8th ranked Arizona Western on Thursday, March 17th at 4 p.m. CT.

Georgia Highlands Lady Chargers received the 3rd seed in the tournament and a first-round bye.  They are scheduled to play the winner of the 14th ranked Casper College – 19th ranked Hutchinson team on Friday, March 18th at 5 p.m.  The Lady Chargers are coached by former SGTC Coach Brandon Harrell.

All games will be livestreamed (for a fee) here:  https://www.njcaa.org/network/landing/index.