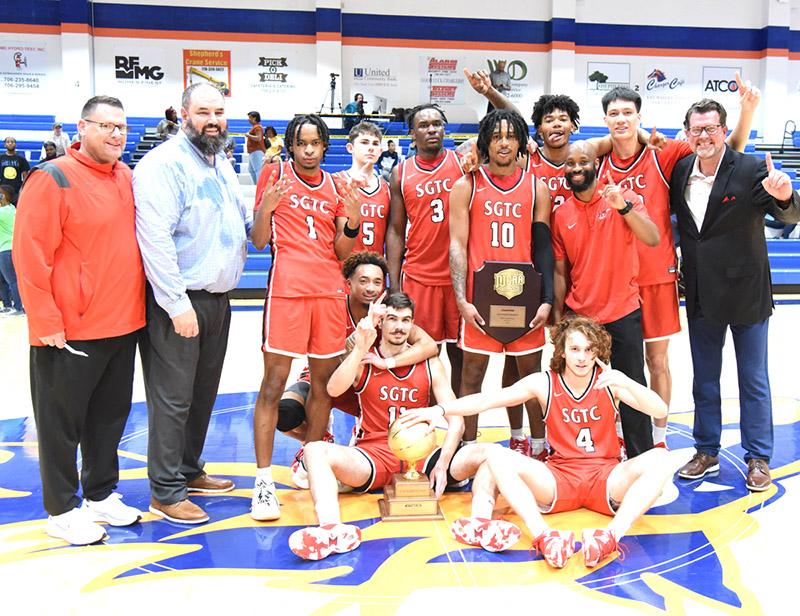 ROME, GA – SGTC Sophomore guard Will Johnston hit back to back free-throws with 6.6 seconds remaining in overtime to give the South Georgia Technical College Jets a narrow 87 – 84 victory over the Georgia Highlands Chargers in Rome, GA in the Georgia Collegiate Athletic Association (GCAA) Tournament finals.  The Jets will now advance to the National Junior College Athletic Association (NJCAA) tournament in Hutchinson, Kansas, March 14 – 19th as the NJCAA Southeast District Champions from Region XVII.

“I am extremely proud of these guys and the hard work they have put into this season,” said SGTC first-year head coach Chris Ballauer.  “Every team in the country sets going to the national tournament as their goal at the beginning of the season with the knowledge that they must win their region/district to get there.  These guys set the goal and accomplished it Saturday afternoon.”  And then Coach Ballauer added, “I will tell you this much, we will shoot a lot of free throws this coming week.”

The Jets had a 15-point lead (72 – 57) with 7:19 remaining in the regular game and were still up 78 – 67 with 1:45 remaining. The Jets missed 11 consecutive free throws in the final three minutes to allow Georgia Highlands to pull within five points with 31.3 remaining.

Georgia Highlands hit a three-point shot and then stole the ball on the inbound pass and made a layup to tie the game at 79 – 79 with 20.7 seconds remaining.  Neither team managed a score in that final 20 seconds and the regulation game ended 79 – 79.

The Jets scored first in the five-minute overtime but Georgia Highlands pulled ahead 84 – 83 with 31.8 seconds remaining.  Will Johnston hit back to back free-throws to allow the Jets to go up 85 – 83.  Two more free throws by Johnston with 6.6 seconds gave the Jets the 87 – 84 lead and they managed to capture the victory and secure their first trip to the Division I NJCAA national tournament in seven years and the first for Chris Ballauer as the men’s head basketball coach and Jalen Harris as the assistant coach.

“I am excited for the opportunity to represent South Georgia Tech and the Georgia Collegiate Athletic Association in the National Tournament,” said Chris Ballauer.  “But I am even more excited for these young men to get a chance to play on the biggest stage you can play on in Junior College.  This is a life changing experience and I am so happy for them.” 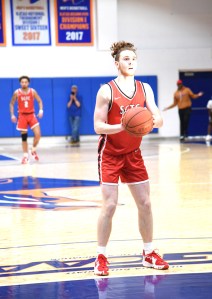 SGTC sophomore point guard Will Johnston (4) sank four consecutive free throws with 31.8 and 6.6 seconds remaining in overtime to allow the Jets to take the 87 – 84 overtime victory over Georgia Highlands. He also had a crucial steal in the final seconds.
Photo by SGTC Athletics

The Jets have been to the National Tournament twice before in their 20-year history.  Both of those trips were with former head coach Stephen Wright in 2008 – 2009 and then again in 2013 – 2014 when South Georgia Tech sent both the Jets and the Lady Jets to the national tournament.  Ballauer was the assistant coach for the Lady Jets in 2013 – 2014 when they earned the right to advance to the national tournament.

The road to the National Tournament was a rocky one for the Jets.  They started the season with a six-game winning streak and were nominated for the NJCAA Top 25 national rankings.  Then they dropped five straight games and six out of eight before the Christmas break.  They continued to struggle in the GCAA conference until they won 9 out of their last 10 games and three straight to earn the right to advance to the national tournament.

They defeated Southern Crescent Tech 89 – 76 in the GCAA tournament quarter-finals and then took a 78 – 70 win over South Georgia State College in the semi-finals to earn the right to face Georgia Highlands in the finals in Rome as the number two seed against the top-ranked Chargers.

The finals was very physical for both teams with a total of 57 fouls, including five technical fouls.  Three Jets fouled out and three starters finished the game with four or three fouls each.  Georgia Highlands had three players foul out as well.

Johnston, the sophomore guard Sydney, Australia, led the Jets in scoring with 30 points.  He had 19 in the first half.  Jalen Reynolds fouled out with 2:20 remaining in the regulation game but still had 17 points, 14 rebounds, two assist and one blocked shot.  Sophomore guard Marvin McGhee, III from Atlanta, GA, tossed in 15 points, had six rebounds, one assist and two steals.

Sophomore guard Malik Battle from Douglasville, GA scored 11 points, pulled down four rebounds, had three assists and one blocked shot.  Nathan Wilson contributed seven points and four rebounds, Bryce Turner had four points before fouling out with 9:20 remaining in the regulation game.  The other player to foul out was Matija Mailivojevic who had two points, five rebounds and a block shot.  He fouled out with 2:48 remaining in overtime.

The Jets finished the season 22 – 11 overall.  They were second in the GCAA regular season with an 11 – 5 record.  They will now represent the Southeast District and Region XVII in the NJCAA national Tournament in Hutchinson, KS. Their first game will be against South Plains Junior College, the 14th seed in the tournament, on Tuesday, March 15.