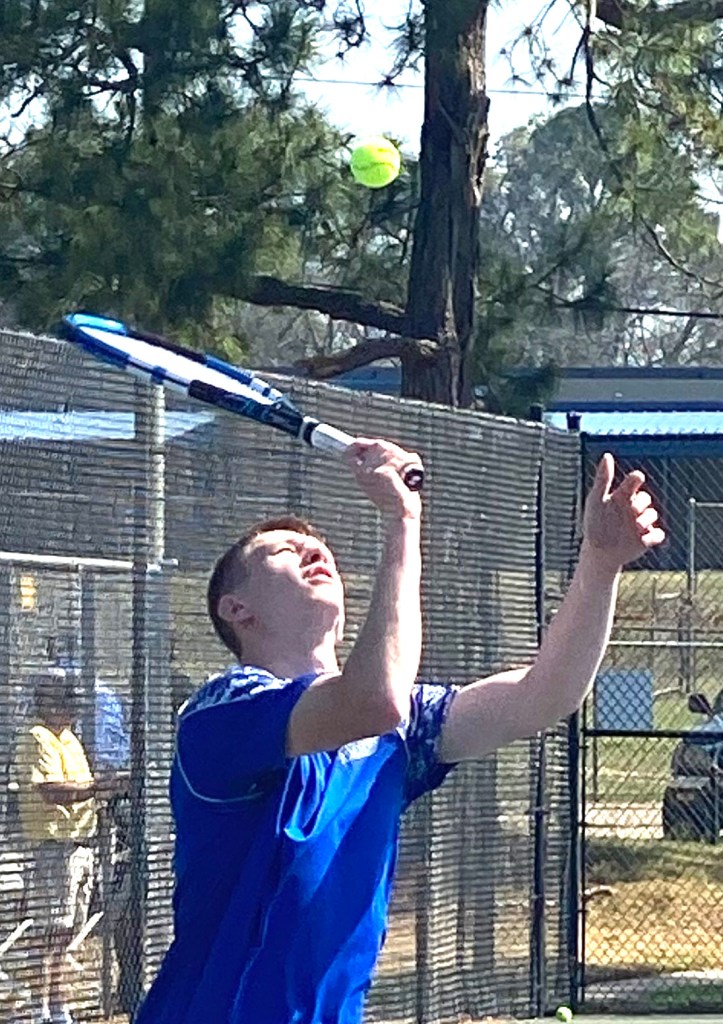 Sumter County’s Griffin Toms is about to serve in one of his matches. Toms and his doubles partner, Josh Campbell, won their doubles match against Marion County 6-2, 6-4. Photo by Ken Gustafson

AMERICUS – The Sumter County boys and girls tennis teams have turned in solid performances in their past three matches. Both the Panthers and Lady Panthers defeated Peach County in Region 2-AAA play on Thursday, March 3 and they followed that up by going 3-1 on Saturday in a tri-match with Marion County and Miller County at the Sumter County High School tennis complex.

Against Marion County, the Lady Panthers got a victory when Alesia Holmes defeated Griselda Vail in a hard-fought match 6-3, 6-7, 10-5. Rebecca Ingle followed that up with a hard-earned victory over MC’s Rainey Robinson 6-4, 4-6, 10-7. The Lady Panthers’ Teigan Pepito lost to Maddie Taylor 1-6, 2-6, but SCHS had a 2-1 lead with two doubles matches to go.
In the first doubles match, the SCHS duo of Melanie Wooden and Courtney Dew defeated the Lady Eagles’ team of Kaylie Zamarripa and Molly Beth Johnson 7-5, 2-6, 10-5. The Lady Panthers then sealed their team victory over MC when the SCHS doubles team of Georgia Wooden and Jazmin Aparicio defeated the MC team of Clara Fuller and Kohina Patel 6-2, 6-1.

In boys’ action, the Panthers fought hard against the Eagles in all their matches, but ultimately fell to MC 3-2. The #1 SCHS player, Riley Herron, lost a hard-fought match to Kenyon King 6-7, 7-5, 7-10. The Panthers dropped their second singles match when James Blaisdell Ndaayezwi fell to Anthony Titow 3-6, 8-6, 5-10. SCHS got its lone singles win when Mitch Herron defeated Ethan Exum in straight sets 6-1, 6-2. 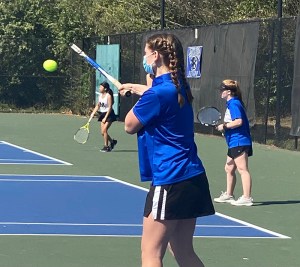 In doubles action, the SCHS team of James Schopen-Davis and Willie Burts lost to the MC duo of Will Howard and Colby Howard 6-3, 4-6, 9-11, ensuring the match win for the Eagles. The Panther duo of Josh Campbell and Griffin Toms defeated the MC duo of Will Roberts and London Morrison 6-2, 6-4, but the Panthers fell to MC 3-2. 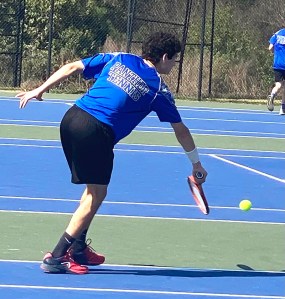 In boys’ action, Riley Herron led things off with a 6-2, 6-0 victory over Chase Durham and James Blaisdell Ndaayezwi defeated Daniel Horne in straight sets 6-0, 6-0. The Panthers were then able to seal their team victory when Mitch Herron defeated Trae Bailey in straight sets 6-1, 6-2.

In doubles action, the Panthers’ duo of James Schopen-Davis and Willie Burts lost to the Pirates’ duo of Hayden Brunson and Kyler Norman 3-6, 2-6. In the second doubles match, the SCHS duo of Jacorey Wright and Corey Wright lost in a hard-fought match to the Miller County duo of Dutch Pare and Judson Thomas 6-4, 2-6, 11-13. Nevertheless, with the three singles victories, the Panthers were able to win the team match by the score of 3-2.

In doubles action, the SCHS team of Melanie Wooden and Courtney Dew defeated the PC team of Trinity Deas and Monserrat Tejada-Munoz in straight sets 6-1, 6-1. 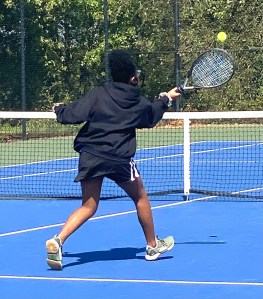 The Lady Panthers completed the shut out when the SCHS team of Paris Eberhardt and Dionisia Westbrook-Myrie defeated the Lady Trojans’ duo of Morelia Villa and Vicki Lopez 6-2, 6-2. There was an alternate match that featured the SCHS team of Georgia Wooden and Jazmin Aparicio. They defeated the PC team of Alondra Zavalal and Victoria Galan 6-1, 6-2, but the outcome had already been decided as the Lady Panthers defeated Peach County 5-0.

In boys’ action, Riley Herron defeated Kenyon Castle in straight sets 6-1, 6-1 and James Blaisdell Ndaayezwi defeated Time Deas 7-6, 6-1 to give the Panthers a 2-0 lead. SCHS was able to seal the deal when Mitch Herron defeated Sidney Johnson 6-0, 6-0, ensuring that the Panthers would win the team match.

In doubles action, the SCHS duo of James Schopen-Davis and Willie Burts defeated the PC duo of Cedric Roberts and Ralston Lester in straight sets 6-3, 6-1. In the other doubles match, the Panthers’ duo of Chris Gilbert and Jacorey Wright lost in straight sets to the PC team of Kody Jarvis and Langston Adams 0-6, 0-6, but the SCHS boys’ team won the team match 4-1.