AMERICUS – Southland Academy (SAR) senior pitcher Chase Ledger struck out 12 batters and sophomore catcher Will Godwin went 2 for 3 at the plate, including a two-run homer in the bottom of a five-run first inning, to lead the Raiders to an 11-0 shut out victory over Fullington Academy on Thursday, March 10 at the SAR baseball complex.

“Chase pitched the ball well and I’m being nit picky, but I feel like we could have hit the ball better.” SAR Head Coach John Brady said. “We kind of went to sleep after we put up that big number in the first inning. We lost our focus, but you know, sometimes you do that and we’ve got to be a little more focused next time.” 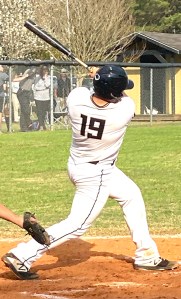 Southland Academy sophomore catcher Will Godwin belted a two-run homer in the bottom of the first inning to help lead the Raiders to an 11-0 shut out win over Fullington Academy.
Photo by Ken Gustafson

The Trojans threatened in the top of the first inning when Shiloh Kehayes led the game off with a single, but Ledger was able to strike out Cutter Tharpe and got Carson Godfrey to hit into a fielder’s choice. Kehyaes then tried to steal third, but was thrown out in the attempt to end the threat. 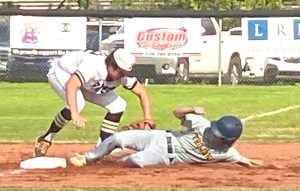 The Raiders then got the bats going in the bottom half of the inning. Henry Johnson led things off with a single and Ledger would later drive in Johnson on an RBI single. Perry Usher then doubled in another run and cleanup hitter Will Godwin drove in two more on a two-run homer to give SAR a 4-0 lead.