AMERICUS – South Georgia Technical College men’s and women’s Division I basketball teams both qualified for the National Junior College Athletic Association national tournaments this season and while head coaches and players receive most of the accolades for the wins and losses, assistant coaches can and do play a big role in the success of teams.  Just ask SGTC head coaches James Frey and Chris Ballauer, who were former assistant coaches.

This is the 12th time that SGTC teams have advanced to the nationals in the 20-year history of the Jets basketball program. And while assistant coaches are sometimes overlooked as they work behind the scenes and sit quietly on the bench with clipboards,  Coaches Frey and Ballauer will tell you, Demetrius Colson and Adenike Adenito for the Lady Jets and Jaren Harris for the Jets, are critical to the program’s success.

“We are very fortunate to have assistant coaches of this caliber,” said South Georgia Technical College Athletic Director and Lady Jets head coach James Frey.  “Each one of them are athletes in their own right and they have tremendous knowledge about the game and how to help our athletes improve every week.” 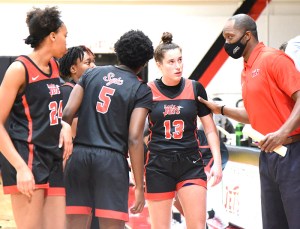 SGTC women’s basketball assistant coach Demetrius Colson is shown above talking with the Lady Jets during a time-out.
Photo by SGTC Athletics

Colson was a member of the Jets first collegiate basketball team in 2001 – 2002.  He was captain of the team in 2002 – 2003 and was named All-Conference.  He received his associate degree in Computer Information Systems from SGTC and continued his athletic career at Georgia Southwestern State University after graduation.

“I have been to the nationals five times between the men’s and women’s teams,” said Colson.  “It feels great to be able to go back again this season and represent South Georgia Tech and the state of Georgia.  This conference doesn’t get the recognition it deserves.  However, the most important part of this is so the ladies can showcase their talents on a bigger stage.”

Colson first came to work part-time for South Georgia Technical College in 2006 with his former assistant coach Steven Wright who had been named head coach.  The Jets went to the NJCAA National Tournament that season with a 27 – 6 overall record and finished in the Elite Eight in the nation.

He worked his way up from that part-time position with the men’s basketball team to become the Lady Jets assistant coach with head coach Brandon Harrell in 2008.  He and Coach Harrell combined their skills and talents to lead the Lady Jets to their first-ever NJCAA Region XVII national tournament during the 2009 – 2010 season.  In 2012, Colston and Coach Harrell both left to go to Georgia Highlands in Rome and establish a women’s basketball team for the new two-year USG college.

Colson returned to South Georgia Tech in 2019 -2020 as the assistant coach with Lady Jets head coach James Frey.  The Lady Jets qualified for the national tournament that year, again in 2020 – 2021 and are headed back this season.

“Seeing both teams make it to nationals says a lot about the program South Georgia Tech has and the ability to do some of the same things as the other larger ‘top tier’ teams,” said Colson.  “I think it shows that as long as you stay focused and do what is at task for ‘the team’ anything is possible.”

He also had words of praise for the Jets and assistant coach Jaren Harris.  “To see the Jets win the conference was amazing.  It is a blessing to see those guys start with 11 and then fight all the way with nine players.  It says a lot about the way they prepared themselves as well.  I think Coach Harris invested all his time in making sure they were ready with all the time he spent with them in the gym, day and night.  Their hard work and dedication are paying off.”

Esther Adenike Adenito also had her start at SGTC.  She arrived at South Georgia Technical College from Lagos, Nigeria in 2016.  She helped lead the Lady Jets to back to back GCAA Conference Titles, NJCAA Region XVII Tournament Titles, District J titles and trips to the NJCAA National Tournament.  Her first year, the Lady Jets won their first game at the national tournament and finished the season 30 – 5.  Her second year she helped lead the Lady Jets to their fifth national tournament.  They ended the season 29 – 6.

Adenito was selected as a first team All-American by the NJCAA as a sophomore as well as named an All-American by the Women’s Basketball Coaches Association (WCBA) in 2018.  She was also the GCAA Player of the Year for 2017 – 2018.  She continued her playing career at New Mexico State and helped lead the Aggies to their 5th straight WAC regular season championship and WAC Tournament title.

“It is very exciting for me to be here as a player who played in the national tournament with the Lady Jets and now as an assistant coach.  I went to Lubbock last year to watch Coach Frey and his team at the nationals and now I have the opportunity to coach there.  I am forever grateful to Coach Frey and SGTC for the opportunities they have given me in life,” said Adenito.

“Nike always has a smile on her face and is upbeat and positive.  She went through a ton of adversity just to get to the United States and South Georgia Technical College,” said SGTC Athletic Director and Lady Jets head coach James Frey.  “To see her make the most of this opportunity and work herself into an All-American here and then move on to New Mexico State and now return as an assistant coach says a lot about her ability and her character.  She was determined to become the best she could be and she worked extremely hard.” 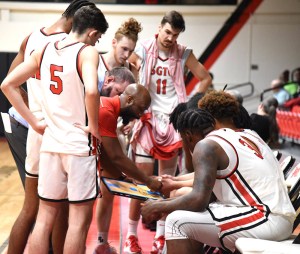 SGTC Assistant Men’s Basketball Coach Jaren Harris is shown above working with the Jets during a timeout.
Photo by SGTC Athletics

And while Jaren Harris did not play at South Georgia Tech, he did play against the Jets as a member of the College of Coastal Georgia during the 2009 – 2011 seasons for head coach Gerald Cox. Coach James Frey was an assistant coach for that program when he played.  Harris played point guard both seasons and came to the College of Coastal Georgia as the Region Player of the Year and First-Team All-State nominee from Washington County High School in Sandersville, GA.

His freshman season at Coastal Georgia, his team lost to Middle Georgia College 92 – 89 in double over-time in the tournament championship.  They were up six points with 30 seconds left in regulation when they missed free throws and got forced into overtime.  His sophomore season, they played Waycross (South Georgia State) in the championship game and lost 68 – 62 after leading the entire game.

“Going to the national tournament in Hutchinson, Kansas, as a coach is amazing!” said Coach Harris.  “It puts me in a very similar mindset as if I was a player when it comes to work ethic, serving, and making sacrifices for the greater good of the group.  The sweat equity we put in behind the scenes and the adversity our team had to go through this season made everything so rewarding.”

And while going to the national tournament is great for Coach Harris, he is even more excited for the Jets players.  “This trip to Hutch means everything to them!  The bulk of our players this season were returners and everyone in our locker room knew from Day 1, what the expectation was, to represent Georgia as the best team in the state.  We came up short in the semi-finals last season and the team that beat us ended up winning the championship so that was daily motivation for those guys in the locker room to prove that we had championship pedigree.”

Three assistant coaches and three very different stories, but each one has contributed to the success of the South Georgia Technical College Jets and Lady Jets basketball programs this season.  And now those three along with head coaches James Frey and Chris Ballauer will be working to get their teams into position to not only attend a national tournament but to win a national title.

“It is always an honor to have a chance to play for a national championship.  I never take this for granted.  I am thankful to our coaches and players for the work they have put in to get to this point.  But for me, it’s about more than just going anymore.  We must go to win games.  Getting there isn’t the objective for this program any longer, winning is,” explained Frey.

Frey added that he is “excited to have our men’s and women’s teams representing the Technical College System of Georgia, the Georgia Collegiate Athletic Association, South Georgia Technical College and the City of Americus and Sumter County out at the national tournaments.  He also pointed out that he is “very proud of Coach Ballauer and Coach Harris and the job they have done with the men’s team.  This is really special for me because I coached both of them in college and now have seen them grow in our profession and have great success.”

The SGTC Jets and their coaches are headed to Hutchinson, Kansas for the 75th NJCAA men’s basketball tournament.  They are ranked 19th in the country and will take on the 14th seeded South Plains Texans on Tuesday, March 15th at 10 a.m. CT.  The winner of that game will take on the 3rd seed Kilgore College on Wednesday, March 16th at 6 p.m.  All games will be livestreamed (for a fee) here:  https://www.njcaa.org/network/landing/index.  WISK-FM 98.7 will be broadcasting the men’s games as well.

The Lady Jets received an at-large bid and a ninth-place ranking in the NJCAA Division I women’s tournament in Lubbock, TX.  They will play the 24th ranked Monroe College Mustangs on Wednesday, March 16th at noon CT.  The winner of the Monroe – South Georgia Tech game will advance to the next round to face 8th ranked Arizona Western on Thursday, March 17th at 4 p.m. CT.