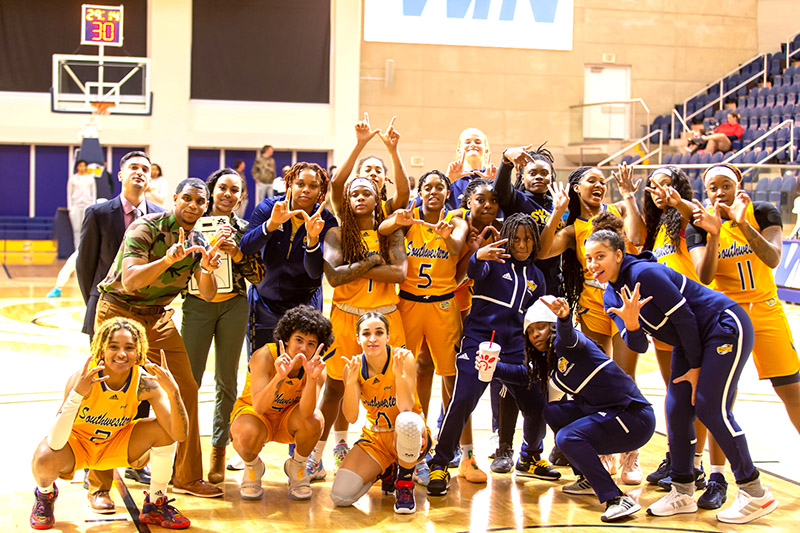 DAHLONEGA, GA – After scoring their first NCAA Tournament victory in school history, the Georgia Southwestern State University Women’s Basketball Team (GSW) went into Saturday’s second round game against their Peach Belt Conference (PBC) foe Lander University with the hopes of toppling the Lady Bearcats and advancing to the Sweet 16. When GSW guard Jacquelyn Levay drilled a three-pointer with 1:35 to go in the game to bring the Lady Hurricanes to within two at 64-62, that possibility increased. However, a turnover by the Lady Hurricanes with 15 seconds and a three-point attempt by Ava Jones that was missed with 12 seconds left dashed GSW’s dreams of advancing in the tournament, as the Lady Bearcats would go on to win by the score of 65-62 in the second round of the tournament at the University of North Georgia.

With the loss, the Lady Hurricanes end their historic season with a record of 23-7.

Jones led the Lady Hurricanes with 21 points on 8 of 17 shooting and Levay poured in 13 points, including three three-pointers. Kayla Langley was also in double figures with 11 points and had four rebounds in the contest.

It was a back-and-forth affair between both teams for much of the game. The Lady Hurricanes’ biggest lead of the game came with 6:16 to go in the first half when Jones drained a three-pointer to give GSW a 27-24 lead. The Lady Bearcats went on a 12-5 run to take a 36-32 lead at the half, but GSW was still very much in this game.

However, the Lady Hurricanes found a way back. Over the next six minutes, GSW went on a 12-3 run that was capped off with a three-pointer by Levay with 1:35 to go in the contest. GSW tuned the ball over with 15 seconds left, but managed to get it back. Then with 12 seconds left and GSW trailing 65-62, the Lady Hurricanes had one last chance to tie the game and send it into overtime, but Jones’ three-point attempt glanced off the front of the rim and LU hung on for the 65-62 victory.

Aniaya Jester led the Lady Bearcats in scoring with 20 points and both Makaila Cange and Miriam Recarte each poured in 12 points in the winning cause.

The 2021-2022 GSW women’s team broke many records for the program and school, including, most wins, the first team to host a conference tournament game, and the first women’s team to be selected for the NCAA Tournament. Their final addition to the Georgia Southwestern record books was becoming the first team either men’s or women’s to win a game in the NCAA Tournament. The Lady Hurricanes will graduate two seniors: Yasmin Perez and Alyssa Nieves, but will return a handful of players from this historic season, including three Peach Belt All-Conference selections.

The Lady Hurricanes (23-7) finish the 2021-22 season with six of the seven losses coming to fellow NCAA Tournament teams and five of those losses to programs ranked in the top-10. They will become the first women’s basketball team to add a NCAA banner into the rafters of the Storm Dome.