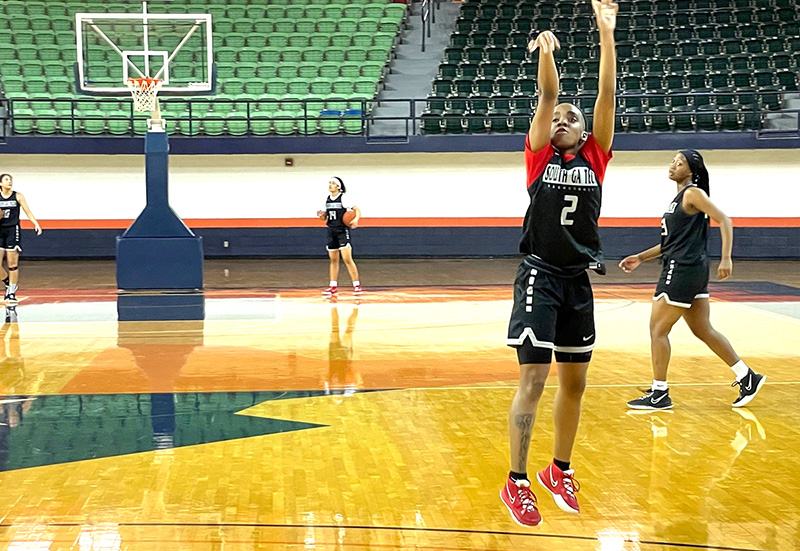 Lady Jets had a chance to hit the courts for a little practice on Monday after a long travel day Sunday to the NJCAA Women’s Division I National Tournament in Lubbock, Texas. Photo by SGTC Athletics

LUBBOCK, TX – It was a long travel day for the 9th ranked South Georgia Technical College Lady Jets as they made their way from Americus, GA, to Lubbock, TX, for their sixth consecutive appearance in the National Junior College Athletic Association’s Division I women’s basketball tournament at the Rip Griffin Center in Lubbock.  The Lady Jets have two days to recover before they face the 24th seeded Monroe on Wednesday, March 16th at 1 p.m.  The game will be livestreamed (for a fee) at: https://www.njcaa.org/network/landing/index.

“There is no easy way to get here,” laughed South Georgia Technical College Lady Jets head coach James Frey after it took the Lady Jets nearly 13 hours of travel time to arrive in Lubbock, TX.  But while the physical trip is tough, so is the road to earning the opportunity to be one of the 24th best Division I women’s teams in the NJCAA.

This will be SGTC Head Coach James Frey’s eighth trip to the National Tournament in 10 years and the ninth overall for the Lady Jets since they began the program in 2004 with former head coach Brandon Harrell, who is also at the tournament with his 3rd ranked Georgia Highlands Lady Chargers.

Georgia Highlands beat South Georgia Tech in the GCAA Tournament finals to earn the NJCAA Region XVII title and then defeated Spartanburg Methodist of South Carolina to earn the 3rd place seed in the tournament.  The Lady Jets received an at-large berth and are ranked 9th in the nation.  Georgia Highlands received a first-round bye and will not play until Thursday.

The Lady Jets defeated Monroe College earlier in the season but everything changes once the tournament begins.  “I still like our chances, but they do a good job and we will definitely have to play to win and advance,” said Coach Frey.  “Everyone is good at the national tournament and anything can happen.”