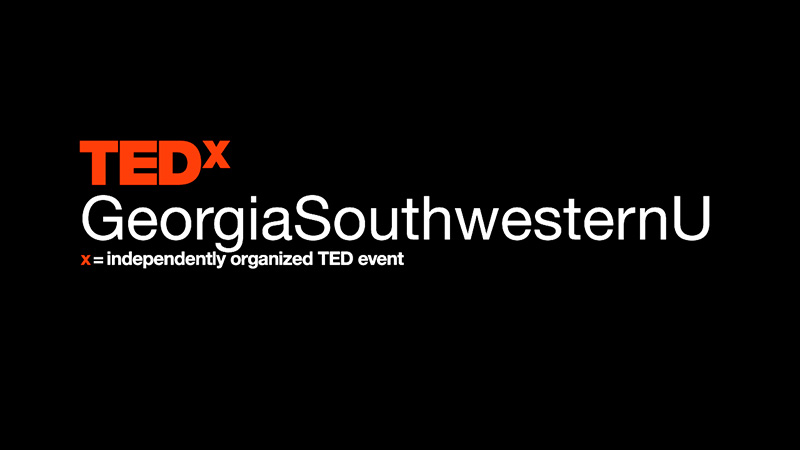 AMERICUS – One hundred TEDx enthusiasts will come together on Friday, April 8, 2022 for the first-ever TEDx event held at Georgia Southwestern State University (GSW) and in Americus, Ga. for an evening of dialogue and inspiration around the theme Perseverance and Creativity. TEDxGeorgiaSouthwesternU, a public event with a limited audience, will take place at 6:30 p.m. in the Magnolia Manor Nursing Auditorium inside the Rosalynn Carter Health and Human Sciences Complex and will feature an incredible line-up of speakers on topics ranging from innovations in education to health to technology and the arts. The event will also be live-streamed.

What was once merely an idea in August 2021 from Jerome Harney, a current GSW online MBA student from California, has now come to life through the help and inspiration of his former professor Irina Toteva, Ph.D. and GSW’s Provost Suzanne Smith, Ph.D. They agreed hosting a TEDx event was a great way to connect online students with on-campus faculty, staff and students in a meaningful way while shining a light on the Americus community at the same time.

“Back in August of last year, I was thinking about connectivity – or lack thereof – to organizations, like a college, when you are remote,” said Harney. “As an online MBA student, I wanted a deeper connection to my campus – one that would persist long after I graduate. Hosting a TEDx event came to mind and I knew executing a project of this caliber would be remarkable. For me, this is more about the journey and the process of doing something different, with the icing and cherry on top being the event.”

Only a handful of universities in Georgia have ever hosted a TEDx event, and this is currently the only TEDx event scheduled for the Southwest Georgia region this year. The event’s organizers hope TEDxGeorgiaSouthwesternU will provide opportunities for the larger regional community as well as the local Americus and GSW communities.

“TED’s purpose to spread new ideas and inspire change aligns with my personal motivation for being an educator,” noted Toteva, TEDxGeorgiaSouthwesternU organizing committee member. “Every day I play a crucial role in inspiring each of my students with the opportunity to plant seeds in their minds, helping them grow to become important leaders of the future. After growing up in a post-communist climate in Bulgaria and then feeling a lack of purpose working for Corporate America, every day in the classroom is a privilege for me. As educators, we have access to an invaluable communication platform every day and we cannot waste this opportunity to inspire.”

The independently produced event, operated under a license from TED, is organized by faculty and staff volunteers and is aimed to give people a forum to share their passions, ideas and experiences. The speakers are excited to bring their unique stories to life which they have been preparing for months working with Toteva as the curator of the event.

Tickets are on sale now and availability is going fast. Platinum VIP admission is $100 which includes admission, VIP seating, a TEDx t-shirt, VIP Lounge access with open bar and heavy hors d’oeuvres, and a special gift. General admission tickets are $20. TEDx t-shirts are available to be purchased for $15.

The event will be live streamed via TEDxGeorgiaSouthwesternU’s YouTube channel.

For information about the event, speakers, sponsorships and more, visit www.gsw.edu/TEDx.

TED is a nonprofit organization devoted to Ideas Worth Spreading, often in the form of short talks delivered by leading thinkers and doers. Many of these talks are given at TED conferences, intimate TED Salons and thousands of independently organized TEDx events around the world. Videos of these talks are made available, free, on TED.com and other platforms. Audio versions of TED Talks are published to TED Talks Daily, available on all podcast platforms.

TED’s open and free initiatives for spreading ideas include TED.com, where new TED Talk videos are posted daily; TEDx, which licenses thousands of individuals and groups to host local, self-organized TED-style events around the world; the TED Fellows program, which selects innovators from around the globe to amplify the impact of their remarkable projects and activities; The Audacious Project, which surfaces and funds critical ideas that have the potential to impact millions of lives; TED Translators, which crowdsources the subtitling of TED Talks so that big ideas can spread across languages and borders; and the educational initiative TED-Ed. TED also offers TED@Work, a program that reimagines TED Talks for workplace learning. TED also has a growing library of original podcasts, including The TED Interview with Chris Anderson, WorkLife with Adam Grant, Far Flung with Saleem Reshamwala and How to Be a Better Human.