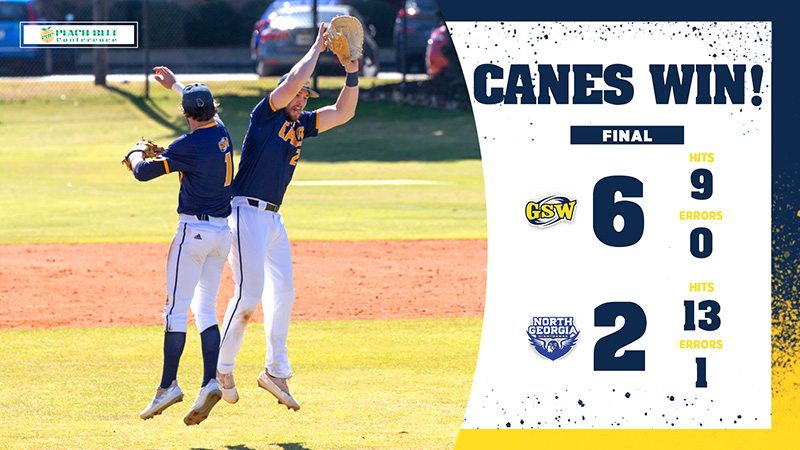 GSW senior infielder Anthony Angelino right) bumps into senior infielder Tyler Skelton (left) while trying to catch a fly ball. Angelino belted a three-run homer in the runnber game of the three-game series against North Georgia to help give the Hurricanes a 6-2 win over the Nighthawks. Photo by GSW Athletics

AMERICUS – The Georgia Southwestern State University Baseball Team (GSW) won the third and deciding game over the North Georgia Nighthawks (UNG) by the score of 6-2 on Sunday afternoon at the GSW Baseball Complex. The three-game series was full of great pitching performances by the Hurricanes.

In the first game, GSW and UNG were knotted at one apiece until an Anthony Angelino homer gave the Hurricanes a lead they would not relinquish, as they added six more runs throughout the next three innings to secure the win.

The second game was a pitcher’s duel from start to finish after both starters went nine complete innings giving up zero runs, sending the game to extras tied 0-0. The North Georgia offense would find a way in the tenth inning to get the walk-off, making the third game the deciding game of the series. The final game was led by GSW the whole way with Brice Mortillaro giving the Hurricanes three key RBI to take the series win over the Nighthawks.