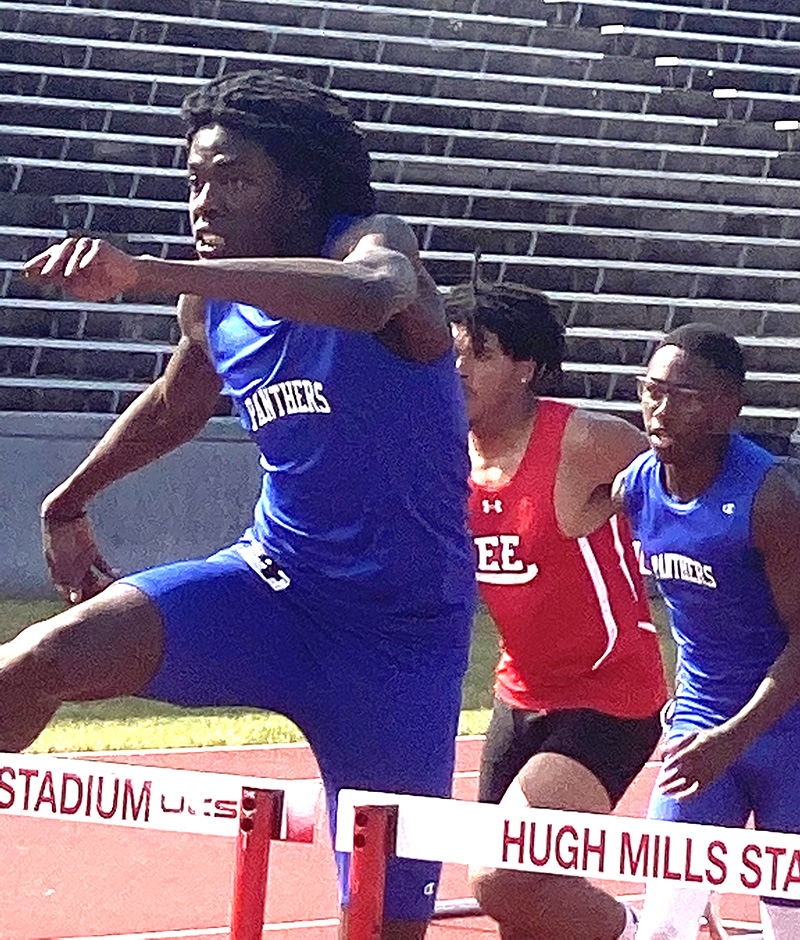 Sumter County male athletes LaTravis Angry (front) and Caleb Josey-Durham (back) compete in the Boys 110-Meter Hurdles at the L.C. Smith and Winfred Benson Relays in Albany, GA. Angry finished in ninth place in the event in a time of 18.84. Photo by Ken Gustafson

As a team, the Panthers finished in 10th place, while the Lady Panthers turned in a 14th place finish. Lowndes County won both the boys’ and girls’ team championships.

Individually, several SCHS athletes showed out at the meet. In boys’ action, Kavon Lewis turned in a top-10 performance in the Boys’ 300-Meter Hurdles. Lewis finished 10th in the event, posting a time of 46.77. 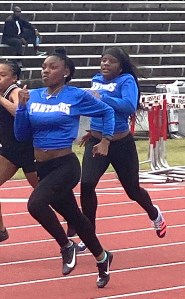 “Honestly, all I had to do was go at my normal pace, like the first lap and on the second, just give it my all,” Toms said. “Overall, I think I did pretty good. On the last 100 meters of the 800, I unfortunately didn’t kick it like I was supposed to. I don’t know what happened, but overall, I’m really happy for myself. I got a 2:20.50. I think that’s a pretty good decent time and hopefully I can improve in the future,” Toms continued. 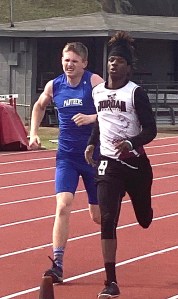 Sumter County male athlete Griffin Toms tries to chase down Kamryn Tucker of Jordan HS in the Boys 800-Meter Run. Toms finished 16th in the event with a time of 2:20.50.
Photo by Ken Gustafson

Toms was also a member of the SCHS 4×400-Meter Relay Team that finished in seventh place in a time of 3:47.14. The other members of that relay team included Hunter Dalton, Kenyon Williams, Mason Butts and Jaquan Bowens.

The Panthers also turned in a strong performance in the 4×800-Meter Relay, finishing in 10th place in a time of 10:13.50. The members of that team included, Griffin Toms, Javion Terry, Mason Butts, Hunter Dalton, Justin Evens, Joshua Dalton and Kavon Lewis. 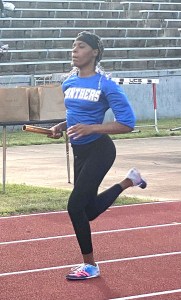 Sumter County female athlete Zyria Battle finished in 24th place in the Girls 100-Meter Dash with a time of 14.14.
Photo by Ken Gustafson 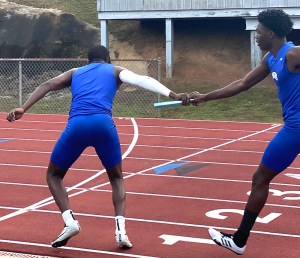 Justin Evans hands the baton off to Kavon Lewis in the Boys 4×400-Meter Relay event at the L.C. Smith and Winfred Benson Relays in Albany.
Photo by Ken Gustafson

In the Girls 400-Meter Dash, Kamayra Waters turned in a strong performance by finishing in 14th place with a time of 1:09.90. Waters’ SCHS teammates, Karla Lizzarraga and Damia Battle, finished 29th and 31st respectively. Lizzarraga crossed the finish line in a time of 1:23.30 and Battle finished in a time of 1:25.45.