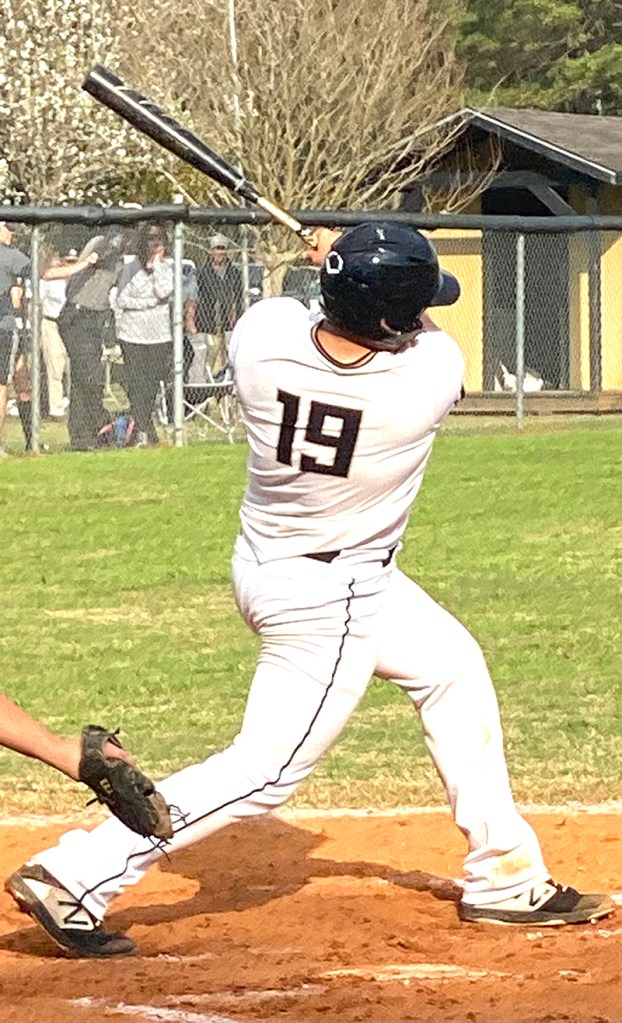 Southland Academy sophomore catcher Will Godwin (#19) drilled his third home run of the season in the top of the seventh inning to give the Raiders a 6-5 victory over Brookwood on Tuesday, March 22 in Thomasville, GA. ATR Archive

THOMASVILLE – Southland Academy (SAR) sophomore catcher Will Godwin belted a solo home run in the top of the seventh inning that would prove to be the difference maker in the Raiders’ 6-5 victory over Brookwood (BKW) on Tuesday, March 22 at the Brookwood School in Thomasville, GA.

It was Godwin’s only hit if the ball game, as he went 1 for 4 at the plate with two strikeouts, but nevertheless, it came at a crucial time in an important Region 3-AAA contest for the Raiders.

Later on in the top of the seventh, the Raiders had a chance to bring in an insurance run when Greer Hagerson singled after Godwin’s home run and Caleb Law would later draw a walk with two outs. However, BKW pitcher Taylor Jacobs Jr. struck out Hudson Collins to end the Raiders’ threat.

Nevertheless, SAR relief pitcher Chase Ledger was up to the task in the bottom of the seventh, as he retired the first three Warriors he faced in order to earn the save and seal the victory for SAR.

With the victory, the Raiders improve to 6-3 overall on the season and 3-0 in GISA Region 3-AAA competition. All three of those region wins have come against the Warriors.

Henry Johnson led the Raiders’ offensive attack by going 2 for 3 at the plate with an RBI and two runs scored and Ledger was also productive at the plate, as he went 2 for 4 with an RBI.

SAR got on the board first in the top of the first inning. Johnson and Ledger started things off with two back-to-back singles. Johnson and Ledger then advanced to third and second base respectively on a wild pitch and Perry Usher drew a walk to load the bases. After Godwin struck out for the first out, Drew Hagerson drove in Johnson by drawing a walk, giving SAR a 1-0 lead.

However, the Warriors responded with three runs in the bottom of the third on a double, a hit batsman, a walk and an error. Fortunately for the Raiders, they fought back in the top of the fourth with four runs of their own. Luke Exley, Buddy Brady and Caleb Law each singled to load the bases and Hudson Collins drove in Exley when he grounded into a fielder’s choice. Johnson then tied the game at 3-3 on an RBI single and Ledger gave the Raiders the lead with an RBI single to left field. SAR then took a 5-3 lead when Usher reached on an error that allowed Johnson to score from second base.

The Raiders, however, would have the final say in the outcome of the game, as Godwin sent a fly ball over the center field wall in the top of the sixth for his third home run of the season and the deciding run that would give SAR the 6-5 victory.

Perry Usher went six innings on the mound for the Raiders to earn the win. He gave up five runs on six hits, walked three and struck out five batters.

The Raiders will turn around and play the Warriors at home this afternoon at 4:30 p.m. They will then travel over to Pinehurst, GA on Thursday, March 31 to take on Fullington Academy. First pitch of that game is scheduled for 4:30 p.m.