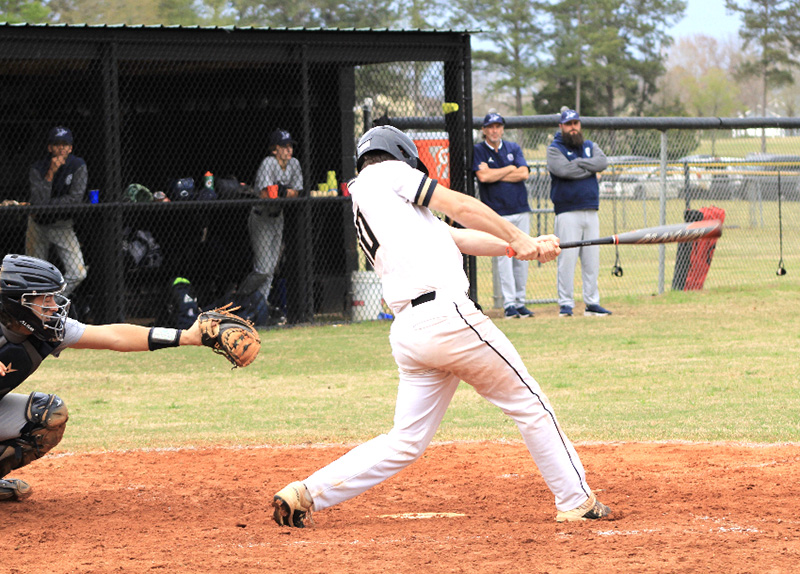 Southland Academy center fielder Caleb Law went 2 for 3 at the plate with a double, an RBI and two runs scored in the Raiders’ 14-4 victory over Brookwood. Photo by Kayla Hudgins

The victory improves the Raiders’ overall record to 7-3 on the season and completes their three-game season sweep of the Warriors.

In the previous two meetings, the Raiders defeated the Warriors 6-5 on Will Godwin’s seventh inning home run down in Thomasville back on Tuesday, March 22 and shut out BKW 7-0 a week ago in Americus.

Going into the bottom of the fifth, SAR had a 6-4 lead, but after Will Godwin led off the frame with a single and Greer Hagerson walked to put runners on first and second with nobody out, Luke Exley reached on an error while laying down a sacrifice bunt and it allowed Godwin to score, giving SAR a 7-4 lead.

Both Buddy Brady and Caleb Law followed with back-to-back RBI singles and Henry Johnson would later drive in two more runs on a double to left field.

The Raiders continued to pound BKW in the inning, as Chase Ledger drew a walk and Perry Usher singled, putting runners on second and third with two outs. Then Godwin, who led off the frame by drawing a walk, came around again to drive in another run on an RBI single, making the score 12-4 in favor of the Raiders. 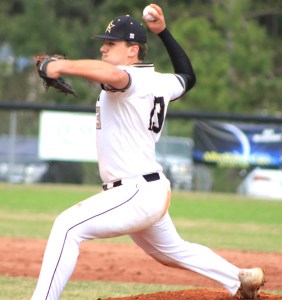 Southland Academy starting pitcher Greer Hagerson gave up four runs on five hits, walked two and struck out four to help lead the Raiders to a 14-4 victory over Brookwood.
Photo by Kayla Hudgins

Hagerson was then able to drive in the Raiders’ 13th run when he was hit by a pitch and Exley finished the game off with an RBI single to left field that scored Usher and gave SAR a 14-4 run-ruled victory.

In the early innings, the contest was much closer. With one out and a runner on first in the bottom of the first inning, Usher doubled to left field and Godwin would later drive in Henry Johnson from third to give the Raiders a 1-0 lead. The Warriors responded with two runs in the top of the third, but Chase Ledger responded with a solo home run in the bottom of the third inning to tie the game at 2-2.

In the bottom of the fourth inning, SAR exploded for four runs on four hits, including doubles from Hagerson and Caleb Law. However, the Warriors struck back in the top of the fifth with two runs on two hits and took advantage of two walks and a hit batsman, making the score 6-4 in favor of SAR.

At this point, however, the Raiders took total control of the game with their eight-run explosion in the bottom of the fifth to secure their 14-4 victory. 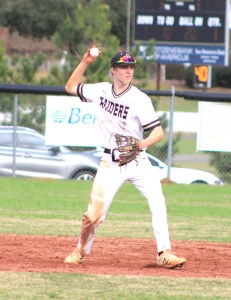 Southland Academy shortstop Henry Johnson went 2 for 3 at the plate with a double, three RBIs and scored three runs in the Raiders’ 14-4 victory over Brookwood.
Photo by Kayla Hudgins

Both Godwin and Usher each went 2 for 4 at the plate with a run scored, while Godwin drove in two RBIs. Hagerson, Exley and Buddy Brady each had one hit in the contest and drove in a run.

Hagerson got the start on the mound for the Raiders. In a little over four innings of work, he gave up four runs on five hits, walked two and struck out four. Matthew Saint came on in relief of Hagerson and gave up one hit while striking out a batter.

The Raiders will not play again until Thursday, March 31 when they travel over to Pinehurst, GA to take in Fullington Academy. First pitch is scheduled for 4:30 p.m.