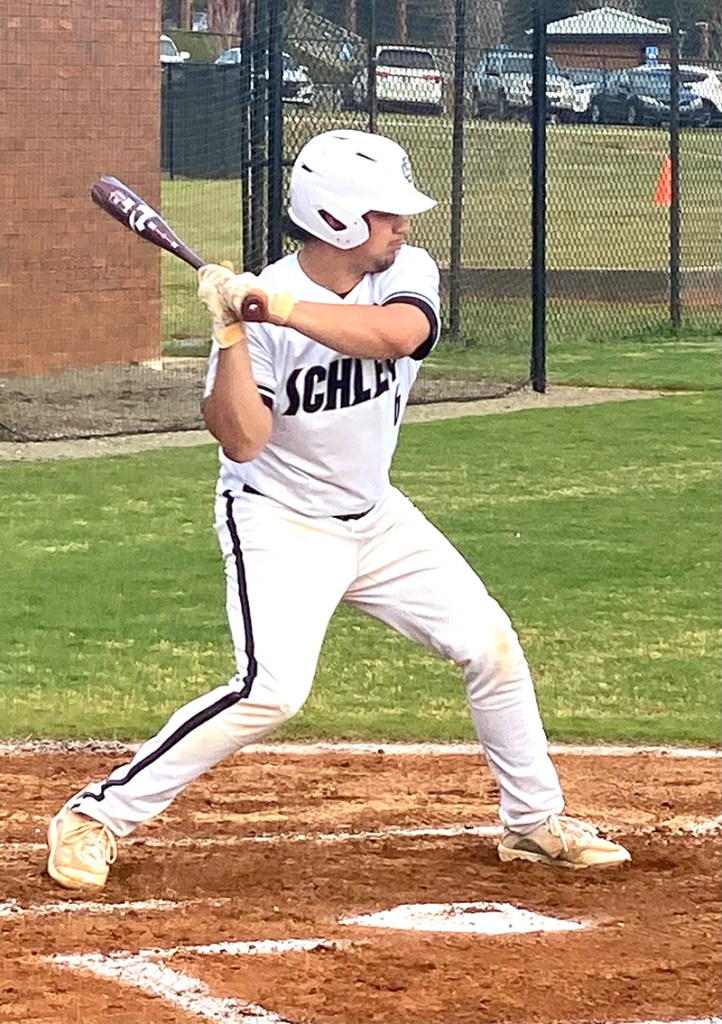 Schley County catcher Jack Clark went 2 for 2 at the plate with a triple, a double and two RBIs to help lead the Wildcats to an 11-10 victory over Peach County. ATR Archive

FORT VALLEY, GA – The Schley County Wildcats (SCHS) had a 10-4 lead going into the fourth inning, but the Trojans of Peach County scored one run in the fourth, three in the sixth and two in the seventh to nearly pull off a come-from-behind victory. Fortunately for the Wildcats, SCHS relief pitcher Ridge Connor was able to retire the final two outs in the bottom of the seventh to secure an 11-10 victory for SCHS on Monday, March 28 at Peach County High School.

This was a game that was supposed to have been played a few weeks ago, but had to be rescheduled due to rain.

The Wildcats jumped out to a 4-0 lead in the top of the first on two hits, including an RBI triple by Jack Clark. SCHS also took advantage of an error, two walks and a hit batsman by the Trojans.

However, PCHS fought right back with four runs in their half of the inning. They did it on the strength of two singles and took advantage of five walks.

Then in the top of the third, the Wildcats added two more runs on back-to-back RBI doubles by Cameron Barnes and Trypp Lumpkin. Up to this point, it seemed as if SCHS was in full control of the contest.

However, PCHS scored a run in the bottom of the fourth and would later score three more on four hits, an error and a walk, making the score 10-8 in favor of the Wildcats.

In the top of the seventh, the Wildcats responded with what turned out to be the deciding run of the game. With a runner on second and one out, Jack Clark doubled in Westbrook and Cameron Barnes followed that up with another double, but both Trypp Lumpkin and Trenton Stubbs flew out in foul territory to end the wildcats’ at bat. It would now be up to reliever Ridge Connor and the defense to hold on for the victory, as SCHS had a slim 11-8 lead.

The Trojans had other ideas, however, and they very nearly tied the game in the bottom of the seventh. With one out and a runner on first, Bryce Harrelson drove in a run on an RBI double and Colter Ginn would later drive in Harrelson on an RBI single with one out, making the score 11-10 in favor of SCHS. However, Connor was able to get Camron Griggs to ground into a fielder’s choice and got Alex Christian to fly out to centerfield to end the game.

The Wildcats used five pitchers in this game. Wesley Hughes got the start on the mound, but struggled early. He gave up four runs on two hits and walked five batters. Brody Smith came on in relief of Hughes and was totally on point, pitching two scoreless innings and posted six strikeouts. Owen Shufflebarger came on in relief of Smith. In 3.1 innings of work, Shufflebarger gave up four runs on six hits, walked three and struck out three. Connor was the final pitcher used by SCHS.

In one inning of work, he gave up two runs on one hit and struck out one batter.

With the win, the Wildcats improve to 11-4 and have won three of their last four games. They will try to make it four out of five when they travel up to Butler to take on the Vikings of Taylor County in a Region 5A-Public contest on Tuesday, March 29. First pitch is scheduled for 5 p.m.