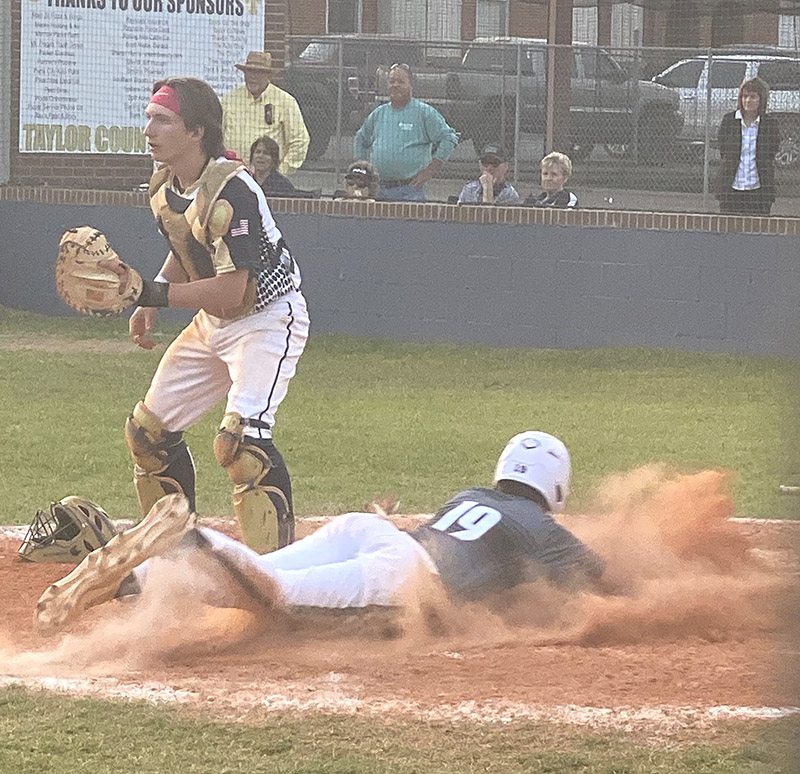 Schley County right fielder Owen Lamb scores the Wildcats’ winning run by sliding into home plate face first on a sacrifice fly by Ashton Raybon in the top of the seventh inning against Taylor County. Photo by Ken Gustafson

BUTLER, GA – Going into the top of the seventh inning of their Region 5A-Public contest against Taylor County (TC), the Schley County Wildcats (SCHS) found themselves trailing the Vikings 6-5. However, SCHS found a way in their last at bat, as Trenton Stubbs tied the game on an RBI single and Brody Smith drove in the winning run on a sacrifice fly. With the offense having done its job, it was up to SCHS relief pitcher Ashton Raybon to close the deal in the bottom of the seventh. Though he walked the first batter he saw, Raybon was able to record two outs before striking out Braxton Driggers to secure the 7-6 come-from-behind victory for the Wildcats on Tuesday, March 29 at Taylor County High School.

“They’ve got a good pitcher,” Cheek said. “He gave us fits in Ellaville earlier in the season. We’ve seen a lot of lefties this year and I felt like we were prepared for it. We took some really good swings early, but didn’t always have something to show for it. We were hitting the ball hard…lining out to guys. We put too many guys on base during the first four innings,” Cheek continued.

The Wildcats struck first in the top of the first when Brody Fuller drew a walk with one out, advanced to third on a fielder’s choice by Jack Clark and scored on a passed ball. However, the Vikings responded in the bottom of the first with three runs on one hit and took advantage of three walks and an error. 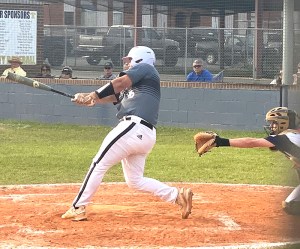 Schley County infielder Trenton Stubbs drove in the tying run of the game on an RBI single to help lead the Wildcats to a 7-6 win at Taylor County.
Photo by Ken Gustafson

SCHS tied the game in the top of the second inning with two runs as a result of an RBI single by Wesley Hughes and a fielder’s choice by Owen Shufflebarger that allowed Ashton Raybon to score. The Vikings, however, countered in the bottom of the inning with three more runs on one hit, a walk and two errors. Errors were a major problem for the Wildcats in this game, as they committed seven of them.

SCHS fought back in the top of the fourth. With one out, Wesley Hughes reached on an error by the TC third baseman and advanced to second on the play. After Shufflebarger flew out to right field for the second out, Carson Westbrook drew a walk and would later steal second, putting runners at second and third with two outs. Brody Fuller then laid down a bunt and was able to reach on an error that allowed both Hughes and Westbrook to score, bringing the Wildcats to within one run at 6-5.

After two scoreless innings, the Wildcats would have one last chance in the top of the seventh inning to score a come-from-behind victory. Jack Clark and Owen Lamb each had back-to-back singles to put the potential tying and go-ahead runs aboard at second and first. After Trypp Lumpkin flew out to centerfield for the first out of the inning, Trenton Stubbs drove in Clark for the tying run on an RBI single and Lamb advanced to third. After Stubbs stole second base, Raybon hit a shallow fly ball into left field and Lamb slid into home plate face first to give the Wildcats a 7-6 lead. 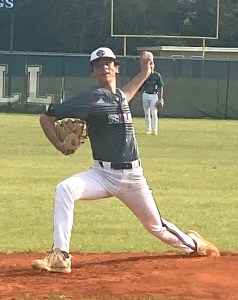 Schley County’s Owen Lamb got the start on the mound for the Wildcats against Taylor County.
Photo by Ken Gustafson

In the bottom of the seventh, the Vikings got the tying run on first when Raybon, who came in as a reliever for the final two innings, walked the TC leadoff batter Levi Pounds. Fortunately for SCHS, Raybon was able to get Dylan Hudgens to hit into a fielder’s choice for the first out. He then got Austin Coker to Fly out to right field and struck out Braxton Driggers to end the game and secure the come-from-behind victory for SCHS.

Lamb, who scored the winning run for the Wildcats, went 2 for 4 at the plate and scored a run to lead the SCHS offense. Wesley Hughes went 1 for 2 with an RBI and both Jack Clark and Trenton Stubbs went 1 for 4, with Stubbs driving in a run and Clark scoring a run.

Lamb got the start on the mound for the Wildcats. In two innings of work, he gave up six runs on two hits, walked four and struck out one TC batter. Brody Smith came on in relief of Lamb and pitched three scoreless innings with a walk and a strikeout. Raybon came on to pitch the final two innings and gave up no runs on a hit, while walking one batter and striking out two, including Driggers for the final out of the game.

Along with mentioning the work that the SCHS offense did to get back in the game and eventually win it, Cheek also praised the pitching performances of both freshmen relievers Smith and Raybon, who pitched five scoreless innings between them and combined to give up only one hit, while striking out three and walking two.

“We found some guys that are going to help us in the playoffs. Both of them pitched tonight,” Cheek said. “We’ve got two freshmen who threw four zeros on the board when they came in and gave us a chance to come back in the game. We kept it close enough that we could put a little pressure on them and get some guys in scoring position. Then we had a bunch of guys come through with some big hits to get us back into it. Then Ashton (Raybon) came in and slammed the door there. That’s probably the best he has pitched this year. That was really good to see.” 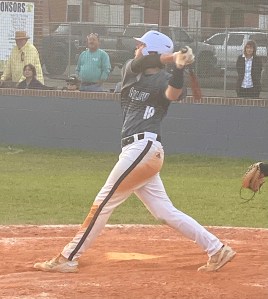 Schley County left fielder Wesley Hughes went 1 for 2 at the plate with an RBI and a run scored in the Wildcats’ 7-6 victory over Taylor County.
Photo by Ken Gustafson

Having now won two straight games, the Wildcats will try to extend their winning streak to three games when they travel over to Cordele to take on Crisp County on Thursday, March 31 at 6 p.m.