Alexia Dizeko (5) and Fanta Gassama (23) were named All-Americans by the NJCAA and WBCA. 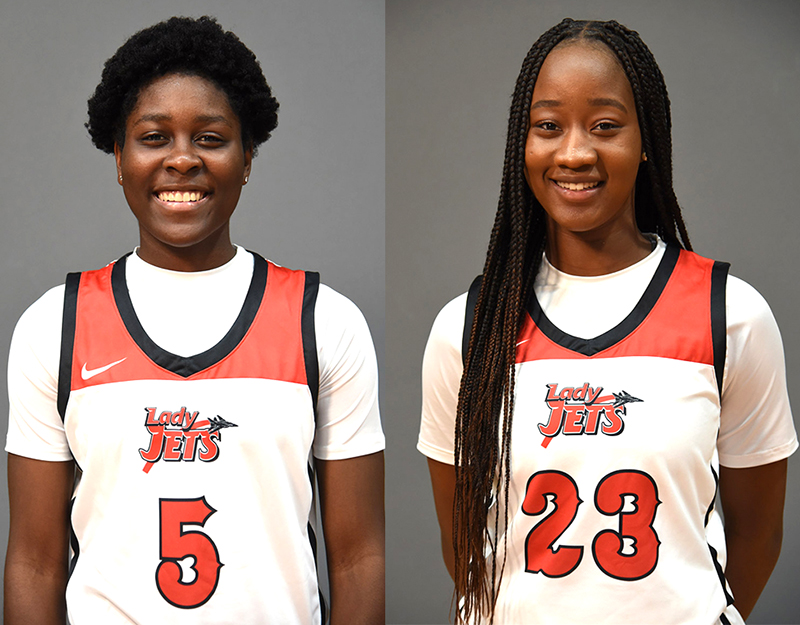 Alexia Dizeko (5) and Fanta Gassama (23) were named All-Americans by the NJCAA and WBCA. Photo by SGTC Athletics

AMERICUS – South Georgia Technical College had two true freshmen from its nationally recognized 2021 – 2022 Lady Jets women’s basketball team to be selected into the 2021 -2022 National Junior College Athletic Association (NJCAA) and the Women’s Basketball Coaches Association (WBCA) All-American teams.  The Lady Jets finished the season as one of the top sixteen teams in the nation with a 27 – 7 record.

“I am happy for and proud of Alexia and Fanta to be recognized by coaches from around the country,” said SGTC Athletic Director and Lady Jets head coach James Frey.  “I think being All-American is an honor for them as well as for their teammates who all played a part in this.  Recognition like this is as much a team recognition as it is an individual one.  Being named All-American by the NJCAA and the WBCA is a big deal.  I think it shows our freshman that if we work hard we can continue to achieve great things.  I am extremely excited to see how we progress together next year.”

Dizeko was the leading scorer this season for the Lady Jets averaging 14.4 per game.  She played approximately 22 minutes each game and started 31 of the team’s 32 games.  She hit 53% of her field goal attempts, 24.4% of her three-point attempts and 78.5% of her free throws.  Dizeko averaged 8.3 rebounds, 2.1 assists and 1.5 steals per game this season.

Gassama averaged 10 points per game this season.  She shot 54% from the field and hit 67% of her free throw attempts.  She was the leading rebounder for the Lady Jets with 11.6 per game.  She also accounted for 1.6 assists and 1.5 steals as well as .9 blocks each game.  She had the highest rebounding and field goal percentage shooting in the GCAA this season.

Only four of the top teams in the NJCAA had two players listed as All-Americans.  Jones College in Ellisville, Mississippi, and South Georgia Technical College were the only two teams with two freshmen recognized.  Arizona Western College in Yuma, Arizona and Chipola College in Marianna, Florida were the other two colleges with two nominations and Arizona had a freshman and a sophomore nominated while Chipola had two sophomores.

This is only the second time that South Georgia Technical College has ever had two players in one season to be recognized as NJCAA All-Americans. The first time was in 2019 – 2020 when Shamari Tyson and Yasriyyah Wazeerud-Din were honored.  Tyson was listed as a second team All-American and Yasriyyah Wazeerud-Din was an Honorable Mention All-American.  Both of those individuals were also highlighted as members of the World Exposure NJCAA Divison I American teams as well. Tyson was a third-team All-American in that poll and Wazeerud-Din was an Honorable Mention.  The Lady Jets set a record for both the men’s and women’s team that season with a 30 – 2 overall performance as well as a Sweet Sixteen finish in the NJCAA Women’s Division I national tournament.

“I am very proud of this year’s team.  We came into the season with only two returning players and nine freshmen,” said Coach Frey.  “I told our team after losing the Sweet 16 game that I refuse to let that game define our season.  I thought winning 27 games and getting to the Sweet 16 with nine true freshmen was a fantastic achievement in itself.  Honestly if you would have told me in November that would happen I would never have believed you.  I am extremely proud of this team and the progress they made this year.”

South Georgia Technical College’s Lady Jets drew an at-large bid to attend the national tournament after losing the GCAA end of the season tournament for Region 17 to the Georgia Highlands Lady Chargers who finished the season as the NJCAA Women’s Division I Runners-up in the national tournament.  Former SGTC Lady Jets Head coach Brandon Harrell is the head coach of the Georgia Highlands Lady Chargers and he was named as the WBCA’s Coach of the Year.