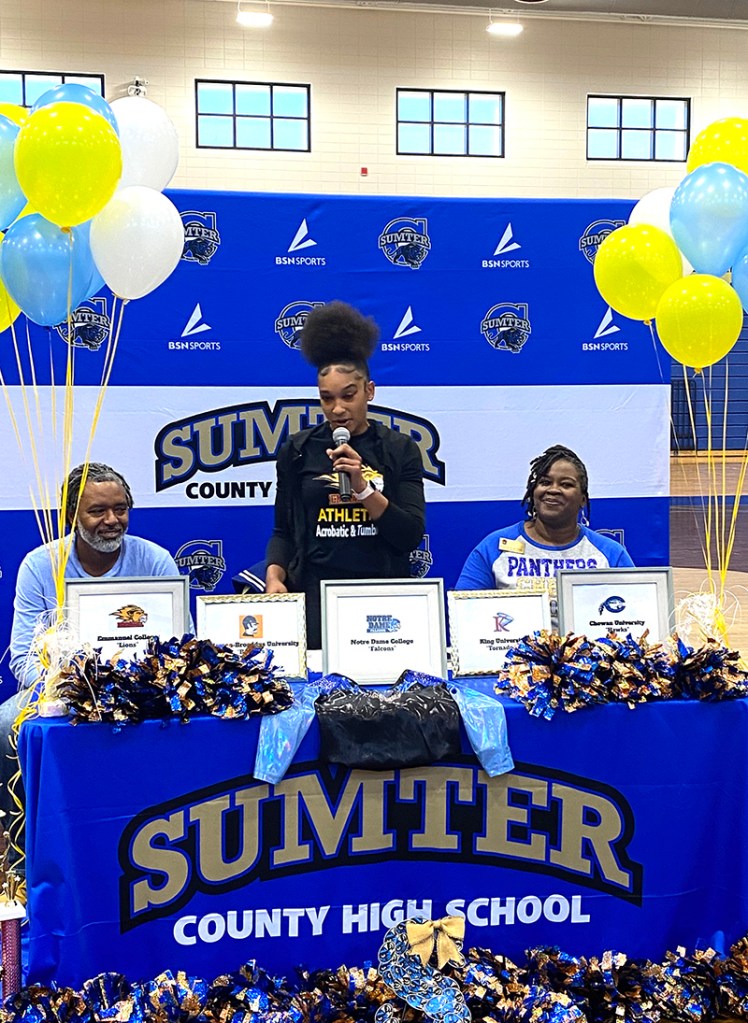 Sumter County senior gymnast and competitive cheerleader Madison Smith signed an Acrobat and Tumbling scholarship to compete at Emmanuel College. To the left is Smith's father, Michael Clayton and to the right is Smith's mother, Kizzy Clayton. Photo by Ken Gustafson

AMERICUS – For another Sumter County High School student-athlete, the dream of playing a sport at the collegiate level was realized on Friday morning, April 8 when in front of a large crowd of family and friends in the SCHS gymnasium, Sumter County Senior Gymnast and Competition Cheerleader Madison Smith signed an Acrobat and Tumbling scholarship to Emmanuel College, an NCAA Division II school in Franklin Springs, GA.

Several colleges, recruited Smith including Alderson-Broaddus University (WV), King University (TN) and a couple of others, but in the end, she chose to compete for the Lions of Emmanuel College, where she will major in Exercise Science. “I want to be a Physical Therapist so that’s the major that I chose,” Smith said.”

Before Smith signed her letter of intent, Alicia Green, the Spirit Coach at Sumter County High School, told Smith in front of the crowd gathered that all of her teachers, coaches and friends are grateful to have been apart of her life.

“We know without a doubt that you will be and do exceptionally well,” Green told Smith in front of the crowd. “You are a scholar athlete and have always put academics first, which is evident by being an honor graduate in the Class of 2022, but you have also always made sure that you put just as much time into gymnastics, cheerleading and all the other sports and for that, we appreciate you,” Green continued.

Before Smith signed her letter of intent, she had a few words to say to the crowd gathered to celebrate her special moment. “I want to thank everybody for coming. I’ve been working and praying for this moment since I could remember,” Smith said. “I want to thank God first because without Him, I wouldn’t be here today. I want to thank my mother for pushing me to my limits.” Smith went on to thank all of her coaches for, in her words, building a good person and a good athlete.

“I also want to thank my teammates, my friends, my family and my teachers for being right there along the way. It really does take a village,” Smith said.

With that, Smith unzipped her jacket to reveal an Emmanuel College shirt she was wearing, signifying the college she will be attending and competing. She wanted to make it a surprise for everybody. Once she did that, she signed her letter of intent.