Panthers and Falcons show out at AME Quad 2 Meet 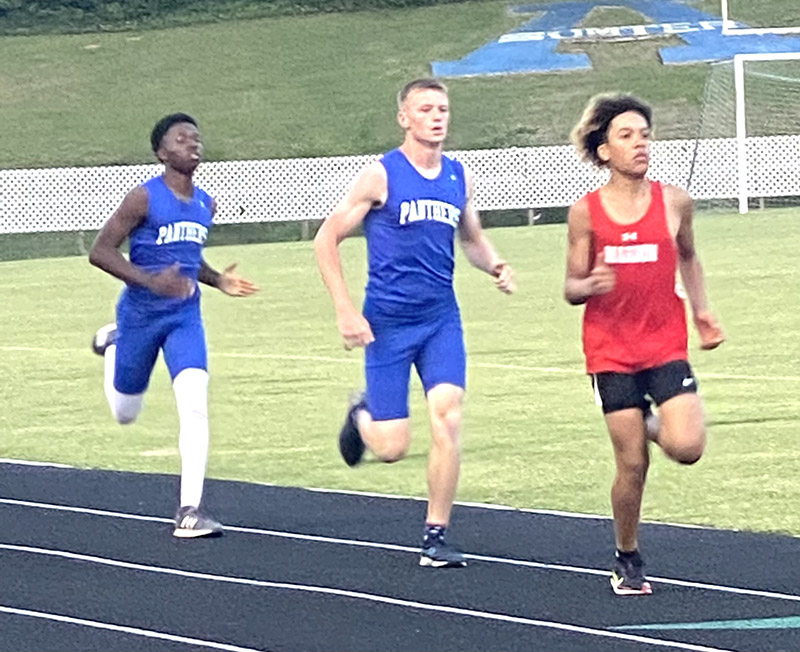 Sumter County senior distance runner Griffin Toms (middle) won the 800-Meter Run in a time of 2:24.00 at the AME Quad Meet 2. Toms is seen here in front of his teammate Javion Terry, who finished second in the event. Photo by Ken Gustafson

AMERICUS – The Sumter County High School track and field teams (SCHS) hosted the AME Quad 2 Meet on Wednesday, April 13 at Alton Shell Stadium. At that meet, both the Panthers and Lady Panthers, along with members of the Furlow Charter track and field teams turned in strong performances in preparation for the upcoming region meets.

“A lot of people got a lot of PRs (personal records) tonight,” SCHS Head Coach Shanika Dyson said. “Everybody did exceptionally well. We’re dealing with a lot of injuries right now with both boys and girls, but I’m looking for everybody to be healthy within the next week or two because we’ve got regions at the end of the month.” Dyson went on to say that she was particularly impressed with how the SCHS relay teams are performing of late compared to how they looked in the beginning of the season. “I’m really looking forward to see how we do in the relays and I’m looking forward to see how we do in the sprints,” Dyson said. 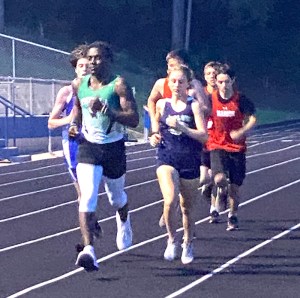 Furlow Charter’s Maria Kilheffer (in front) won the Girls 1600-Meter Run in a time of 6:15.00.
Photo by Ken Gustafson

Furlow Charter (FC) had both male and female athletes competing in the distance events. In the Girls 3200-Meter Run, FC’s Maria Kilheffer won the event in a time of 14:23.00 and her teammate, Jacklyn Chen, finished second in a time of 17:04.00.

Mason Butts claimed the championship for the Panthers in the Boys 200-Meter Dash (22.63) and his teammate, Anthony Tyson, finished fifth in the event in a time of 23.40.

In the boys’ distance events, SCHS runner Matthew Toms won the 800-Meter Run in a time of 2:24.00. Toms’ teammate, Javion Terry, finished in second place right behind him in a time of 2:26.00. “I thought for a moment that he (Terry) was going to beat me in a sprint-off, but somehow, I pulled it off,” Toms said. “Honestly, I feel proud. I feel like I could have done a little faster, but I didn’t, so yeah. I’m proud of myself.”

In this meet, there was what is called a “Throwers Relay”. This relay consisted of athletes who were not in any of the running events, but participated in the throwing events. The Panthers finished third in this event in a time of 1:01.00.