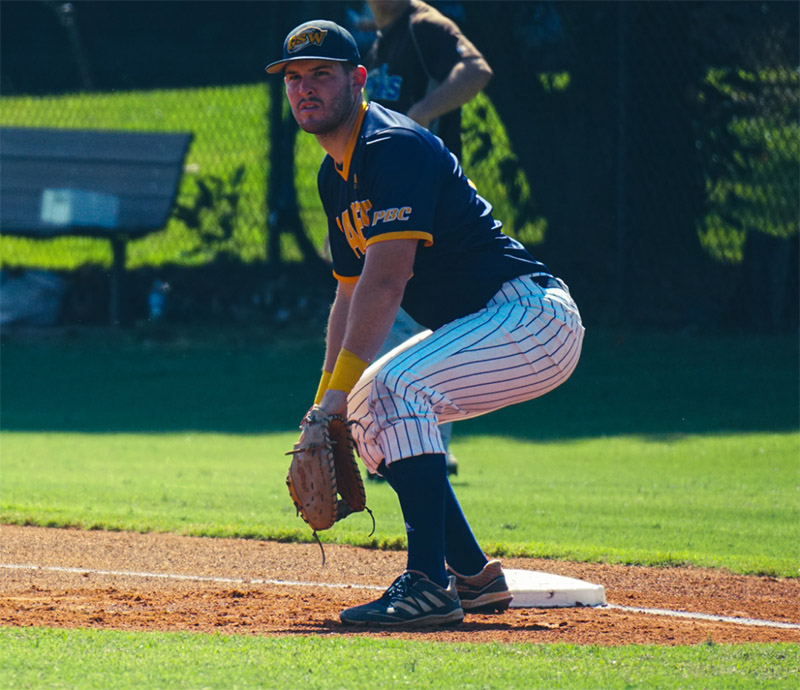 GSW senior first baseman Anthony Angelino went a combined 6 for 13 at the plate with a home run and six RBIs to help the Hurricanes take two of three games at Flagler College. Photo by GSW Athletics

ST. AUGUSTINE, FL. — Georgia Southwestern (17-22) won its road series over Peach Belt Conference foe Flagler College (19-23), taking two of the three games in the series. The Hurricanes won the first two games by scores of 1-0 and 10-5 Thursday and Friday before dropping Game 3 by the score of 5-4 in 11 innings on Saturday, April 16.

Jared Donalson shined in the first game of the series throwing a complete game shutout to help the Hurricanes to a 1-0 victory to open up the series. The Hurricane bats would struggle but Anthony Angelino would drive in Miles Hartsfield with a sacrifice fly in the third for the lone run in the ballgame.

In the second game of the series the Hurricanes would take control jumping out to a five run lead in the third making it a 10-1 game by the seventh inning. The Saints would score four late but the four runs were not enough as the Hurricanes secured the series victory on Friday night.

The third and final game of the series went to Flagler. The Saints jumped ahead 4-0 before four unanswered runs by the Hurricanes sent the game into extra innings. Flagler would score on a sacrifice fly in the bottom of the 11th to salvage the weekend and avoid the home sweep.