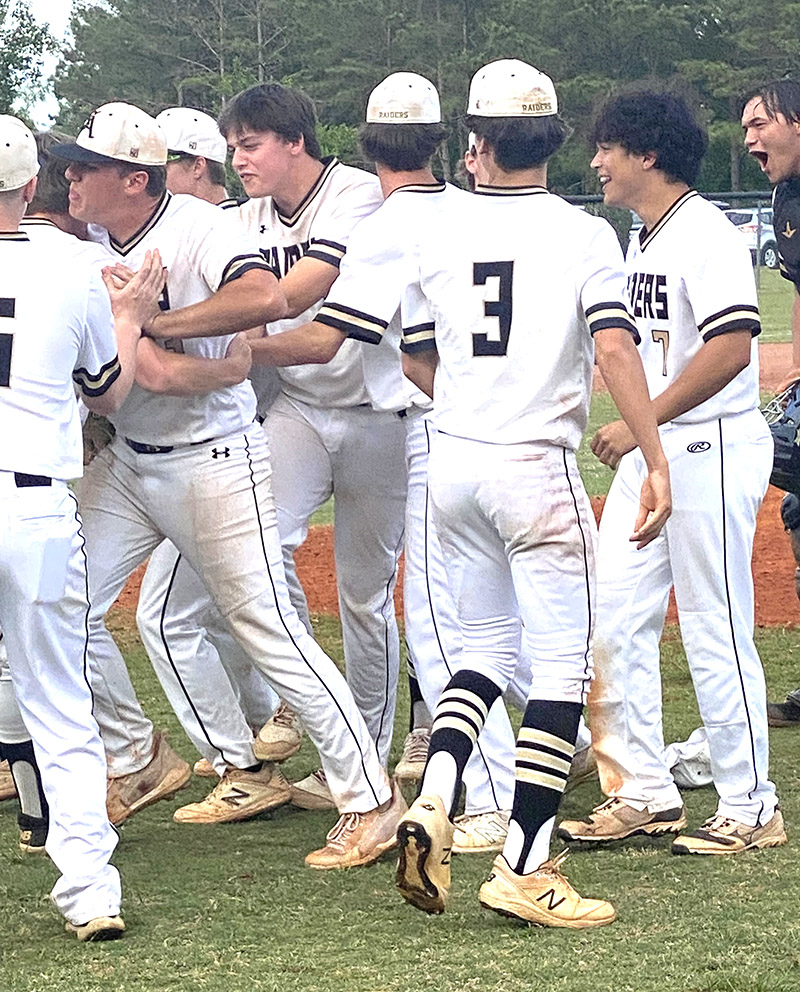 The Southland Academy Raiders celebrate after their 6-5 come-from-behind victory over Valwood to clinch the best-of-three-games series against the Valiants in the first round of the GISA Class AAA State Playoffs. As a result, the Raiders will face Westfield in the second round on Friday, April 29. Photo by Ken Gustafson

AMERICUS – Going into the bottom of the sixth inning, the Southland Academy Raiders (SAR) trailed Valwood 5-4 in the deciding third game of the best-of-three-games series between the two teams in the first round of the Georgia Independent School Association (GISA) Class AAA State Playoffs. However, the Raiders played “small ball” in the bottom of the sixth and it paid off. Thanks to bunts executed by Hudson Collins and Caleb Law, coupled with a crucial balk call against Valwood pitcher Matthew Kerrigan, the Raiders scored two runs and scored a 6-5 come-from-behind victory over the Valiants on Tuesday, April 26, to win the series and will advance to the second round of the state playoffs against Westfield.

The Raiders had a 4-2 lead going into the top of the sixth, but SAR starting pitcher Greer Hagerson walked the first three batters he faced and then walked in a run to bring the Valiants to within one. At this point, the bases were still loaded with nobody out. SAR Head Coach John Brady then brought in sophomore reliever Trey Sellars, who walked in another run to tie the game at 4-4. Matthew Kerrigan then drove in the Valinats’ go-ahead run with an RBI single and the Raiders found themselves down 5-4 with the bases still loaded and nobody out.

However, Sellars was able to regain his composure and struck out both Maddox Coile and Dalton Smith before getting Conner Hutto to ground out to end the threat without further damage. 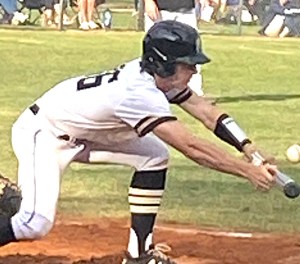 Southland Academy senior outfielder Hudson Collins executes a bunt single in the bottom of the sixth inning that proved to be a crucial play in the Raiders’ 6-5 victory over Valwood in Game 3 of their first round series of the GISA State Playoffs.
Photo by Ken Gustafson

In the bottom of the sixth, Luke Exley led off with a single for SAR and Hudson Collins executed a bunt single, putting runners on first and second with nobody out. Henry Johnson flew out to centerfield for the first out, but a balk was called against Valwood pitcher Mathew Kerrigan that allowed Exley and Collins to move up to third and second base respectively. This set the stage for Caleb Law, who laid down a bunt that Kerrigan couldn’t field and it allowed pinch runner Mac McMichael to score from third to tie the game at 5-5. Chase Ledger then drove in Collins on a sacrifice fly to give the Raiders the lead before Kerrigan struck out Will Godwin to end the threat, but the SAR offense had done its job.

In the top of the seventh, Sellars retired all three batters he faced to secure the come-from-behind victory for the Raiders and punch their ticket to the second round of the state playoffs. 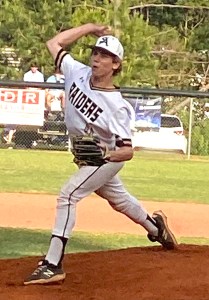 Southland Academy sophomore pitcher Trey Sellars pitched his way out of a jam in the sixth and retired all three batters he faced in the seventh to secure the Raiders’ 6-5 victory over Valwood.
Photo by Ken Gustafson

Perry Usher went 2 for 3 to lead the Raiders’ offense and Ledger went 1 for 2 with a double, two RBIs and a run scored. Both Hagerson and Buddy Brady each had a hit and an RBI and the Raiders also got hits from Collins and Henry Johnson.

In his five innings of work as the SAR starting pitcher, Hagerson gave up five runs on two hits, walked nine and struck out six. Sellars, who came on in relief, gave up a hit, walked one and struck out two batters. 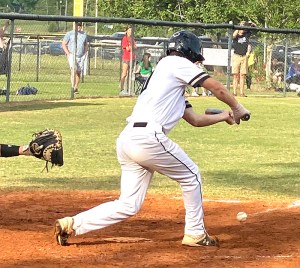 Southland Academy senior Caleb Law laid down a bunt in the bottom of the sixth inning that led to Raiders’ tying run and would eventually help lead to SAR’s victory over Valwood.
Photo by Ken Gustafson

The Valiants struck first in the top of the first when Dalton Smith drove in Kerrigan on an RBI single, but the Raiders responded in the bottom of the second when Hagerson drove in Perry Usher on an RBI single to tie the game at 1-1.

Valwood regained the lead in the top of the third when A.J. Thompson reached on an error that allowed Maddox Coile to score. The Valiants could have added to their lead in the third, but Conner Hutto was thrown out trying to steal home. Hutto broke from third when Hagerson threw a wild pitch that got away from catcher Will Godwin. However, Godwin was able to get the ball to Hagerson, who tagged out Hutto as he was trying to score for the third out. This ended up being a crucial play in the game, as the Valiants went on to lose by one run. 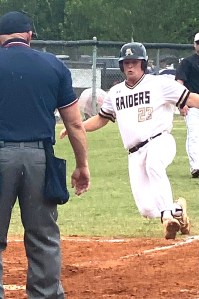 Southland Academy junior Chase Ledger is about to slide home safely and score one of the Raiders’ six runs in their 6-5 series-clinching victory over Valwood.
Photo by Ken Gustafson

The Raiders countered in the bottom of the third when Ledger drove in Johnson on an RBI double, tying the game at 2-2. Later on in the inning, Brady gave SAR a 3-2 lead when he drove in Ledger on an RBI single to centerfield.

SAR increased its lead to 4-2 in the bottom of the fifth when pinch runner Scout Luvin stole home on a wild pitch, but the Valiants scored three runs in the top of the sixth by taking advantage of five walks by SAR pitchers. This necessitated the Raiders’ heroics in the bottom half of the inning, as they were able to score two runs to earn their victory. 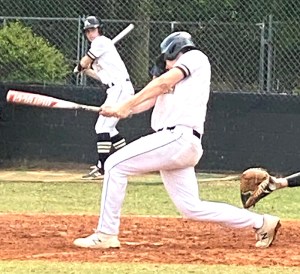 Southland Academy junior Luke Exley went 1 for 3 with a single in the Raiders’ 6-5 victory over Valwood.
Photo by Ken Gustafson

SAR (12-11) will continue on to the second round of the GISA Class AAA State Playoffs against Westfield in Perry on Friday, April 29, while Valwood finishes its season at 11-13.

The Raiders’ first game against the Hornets on Friday is scheduled for 3 p.m., followed by Game 2. If Game 3 is necessary, it will be on Saturday, April 30 at 1 p.m.

The Hornets (17-8) swept Creekside Christian Academy in two games to move on to the second round.