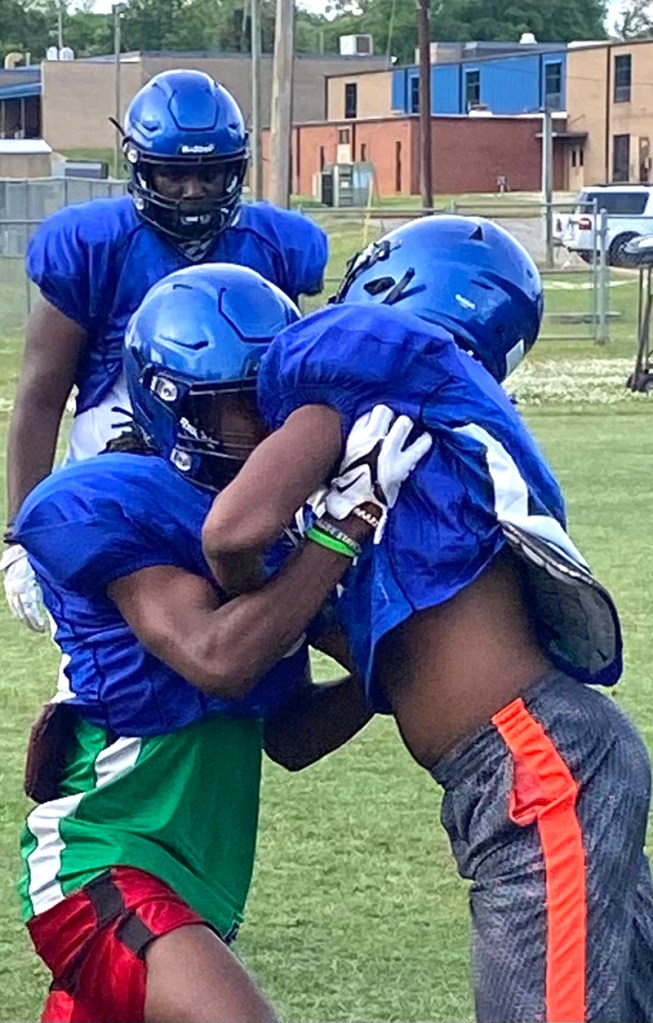 Two Sumter County football players battle it out in one-on-one hitting drills near the end of the first day of Spring Practice for the Sumter County High School Football Team. Photo by Ken Gustafson

AMERICUS – The start of he 2022 high school football season is four months away, but new Sumter County High School Head Football Coach Clifford Fedd already has his team fired up and ready to work, as Spring Practice officially began for the Panthers on Monday, May 2.

The Panthers hit the ground running on the practice field behind Alton Shell Stadium on Monday and they showed the intensity, enthusiasm and toughness that Coach Fedd and his staff wanted to see on Day 1.

“It’s going as well as expected,” Fedd said. “The kids are coming out here with a little fire and a little thump. We’re excited to be out here. It’s just good to see football again.” 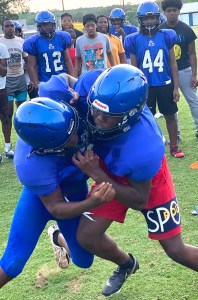 During Spring Practice, which lasts for the next two weeks, the players will be allowed to practice in pads, which will allow for a lot of hard hitting. Near the end of the first day of Spring Practice, that hitting showed up in earnest as several players engaged in one-on-one hitting drills.

The Panthers will be practicing for the next two weeks before heading over to Marion County for a spring scrimmage game against the Eagles on Friday, May 13 at 7 p.m.

Throughout the summer, the Panthers will be engaged in daily workouts without pads and will be in various seven-on-seven passing camps. Then on Friday, August 12 at 7:30 p.m., Sumter County will host Schley County in a scrimmage game before kicking off the season on Friday, August 19, against Houston County at home at 7:30 p.m.