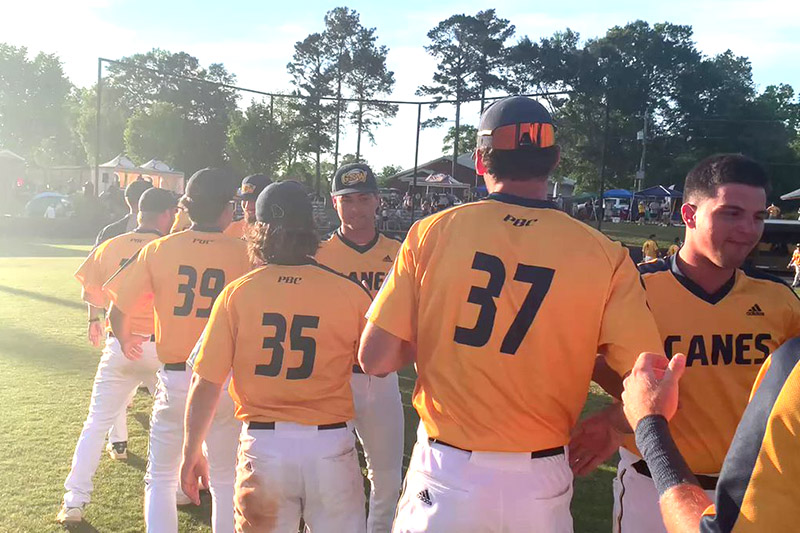 GSW players Greg Wozniak (35), Peyton Sells (37), Vicente Amaya and the rest of the Hurricanes gathered in “Victory Formation” after they took two of there games to win their first round series over North Georgia in the first round of the Peach Belt Conference Baseball Tournament. GSW will advance to the PBC semifinals to play Georgia College in Columbus, GA on Friday, May 13, at 7 p.m. Photo by GSW Athletics

AMERICUS, GA – The Georgia Southwestern baseball team defeated North Georgia in their Peach Belt Conference Tournament series. GSW won the opening game of the series before losing the second game on Sunday forcing a decisive third game for a spot in the semifinals. The semifinals will be played at Columbus State University next weekend in a double-elimination tournament.

GSW senior pitcher Jared Donalson opened up the first game as the starter on Saturday and came in and closed out the series, getting the save in the third game on Sunday. On Saturday, Donalson threw eight innings allowing just one earned run and three hits, Donalson threw 121 pitches and Dalton Cameron came in relief in the ninth to finish the game. It was all Hurricanes in the first game with GSW scoring four in the first inning and seven over the first three innings of the game. North Georgia would settle in and hold the Hurricanes to just one run over the next six innings of play. The Nighthawks would get on the board in the eighth but GSW secured the first game of the series with an 8-1 victory.

The second game of the series and the first on Sunday was a rough showing defensively for GSW. Despite only being out-hit by North Georgia by one, GSW lost 7-2 with three errors in the game. The loss forced a third game of the series to decide who would move on to the next round.

In the third and final game of the series, GSW faced an early deficit with North Georgia hitting a home run on the first pitch of the game. GSW would answer with a run of their own but North Georgia would retake the lead in the top of the third. The Hurricanes came alive in the bottom of the third, tying the game with a Reid Ragsdale single and then taking advantage of an error that would’ve ended the inning by tacking on four more runs, with Hunter Foster adding two to the cause with a triple into right field, scoring two runs to make it 6-2.

North Georgia would add three in the sixth and one in the seventh to make it a three-run deficit. The Hurricanes turned to their Ace and brought Saturday’s starter Jared Donalson into the game to deliver the Hurricanes into the semifinals. Donalson pitched two innings allowing no earned runs and striking out four batters in the process. North Georgia would get the deficit down to two after a passed ball allowed a runner to third who scored on an infield single in the eighth. Donalson forced two fly outs in the ninth and struck out the final batter of the game sending the Hurricanes to the Peach Belt Conference semifinals in Columbus.

The Hurricanes will now face Georgia College in the PBC Tournament semifinals on Friday, May 13, at 7 p.m.