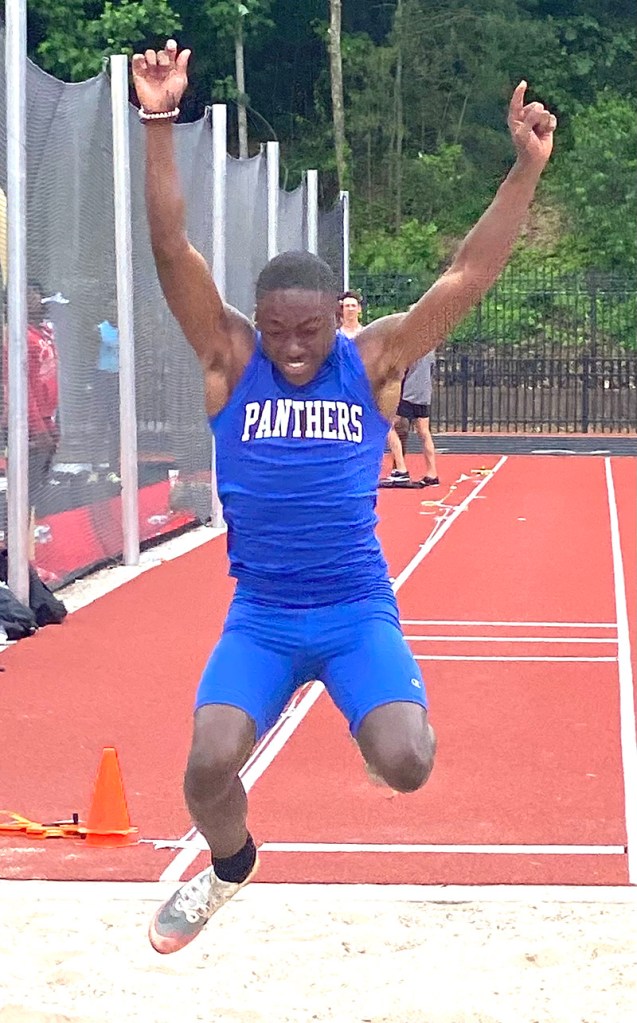 Sumter County’s Caleb Josey-Durham qualified for next Saturday’s GHSA Class AAA State Meet in the Boys Long Jump by finishing in seventh place with a jump of 21-1. Photo by Ken Gustafson

Aldridge finished in third place in the Girls Shot Put event with a distance throw of 37-3.75, while Josey-Durham finished seventh in the Boys Long Jump event (21-1) and fifth in the Boys Triple Jump event (41-10.50), thus qualifying for state in both events. The top eight athletes in each event qualified for the state meet. Both Aldridge and Josey-Durham will be competing in their respective events in the GHSA Class AAA State Meet at Carrollton High School in Carrollton, GA on Saturday, May 13. 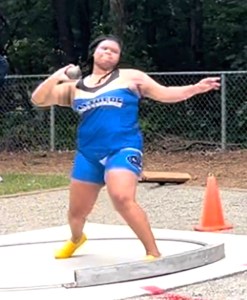 Sumter County female shot putter Eriel Aldridge finished in third place in the Girls Shot Put at the sectional meet and qualified for the state meet in that event.
Photo by Shanicka Dyson

For Aldridge, it was a huge challenge competing against athletes that were throwing the metal ball a lot further than her.

“Going into it, I saw other people throw, like, 40 feet and I wasn’t near it. That was, like, a disadvantage. You can’t doing nothing but throw,” Aldridge said. In spite of her concern, Aldridge’s performance was good enough for third place and a berth in next Saturday’s state meet in Carrollton. Autumn Clark of GAC finished as the runner-up in the event (39-7) and her teammate, Alana Thomas, won the event with a distance throw of 39-8.50. 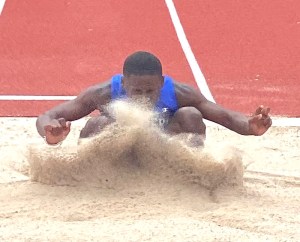 The Panthers’ Caleb Josey-Durham qualified for the state meet in the Boys Triple Jump event by finishing in fifth place with a distance jump of 41-10.50.
Photo by Ken Gustafson

While Aldridge was the only SCHS female athlete to qualify for the state meet, SCHS Girls Head Coach Shanicka Dyson was extremely pleased with her squad’s effort at the sectional meet and throughout the season.

“I’m very proud of the girls for this entire season. They did extremely well,” Dyson said. “It took a lot of girls coming off the pandemic to make it here out of region, to make it to sectionals and it’s very exciting to know that Eriel (Aldridge) has made it to state. That’s something that we had been banking on. She had been the leader the entire season and so we were really hoping that she could keep that lead the entire season. Unfortunately, she didn’t make it in Discus, but she made it in Shot Put. We’re both very happy that she made it in Shot Put. She’s going into state as the third top thrower, so I’m looking to see what she can do before we get to state.” 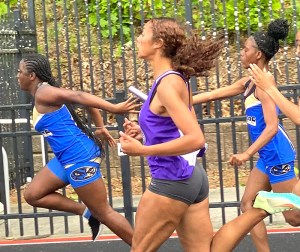 Sumter County’s Zyria Battle (right) hands the baton off to Ja’kierra Pride during the Girls 4×100-Meter Relay event. The Lady Panthers finished in 12th place in a time of 51.55.
Photo by Ken Gustafson 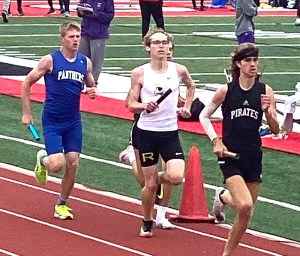 Sumter County’s Griffin Toms (blue jersey) tries to chase down two other runners in the Boys 4×800-Meter Relay at the Class AAA Section B Meet. The Panthers finished in 10th place in the event in a time of 9:17.00.
Photo by Ken Gustafson

It was an unseasonably cool day with mostly overcast skies in Norcross on the north side of Atlanta and the temperature was about 15 degrees cooler than it was in Americus. According to SCHS Boys Head Coach Leonard Holsey, his squad had to adjust to cooler weather than what they are use to this time of year in Southwest Georgia. 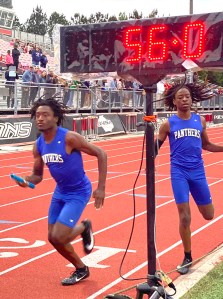 Sumter County’s Hunter Dalton (behind) hands the baton off to his brother, Joshua Dalton, during the Boys 4×400-Meter Relay event at the Class AAA Section B Meet.
Photo by Ken Gustafson 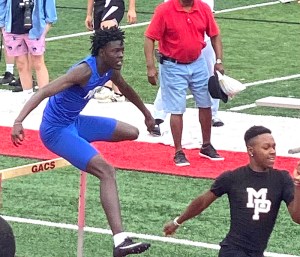 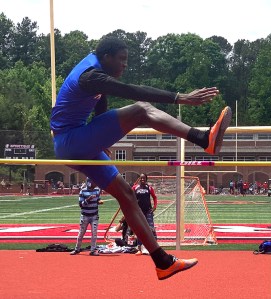 In the Boys High Jump event, Jaquan Bowens of SCHS tried his best to make it to the state meet. Bowens was able to clear five feet, 10 inches, but could not clear the height of six feet and finished in 11th place. 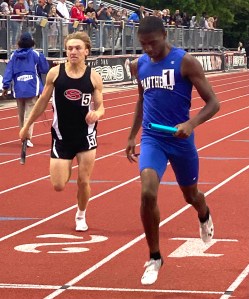