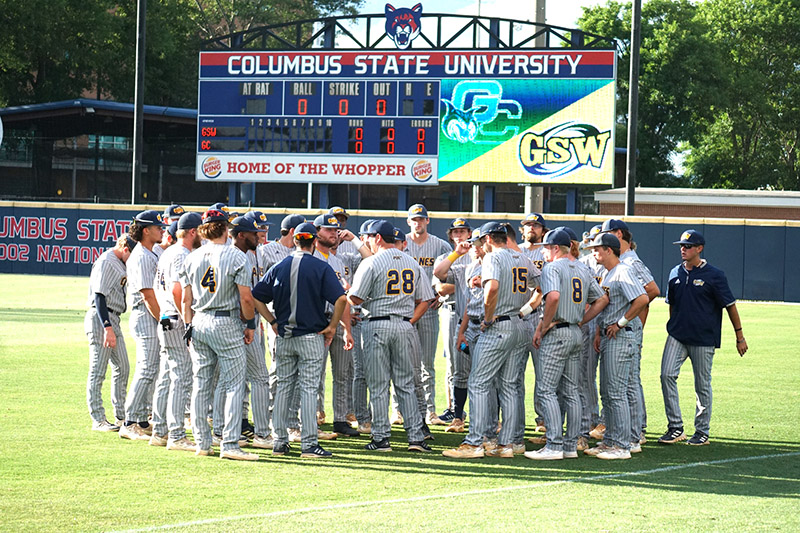 The Georgia Southwestern University Baseball Team gathers together for the final time in 2022, as the Hurricanes were eliminated from the Peach Belt Conference Tournament with losses to Georgia College (6-5 in 10 innings) and Columbus State (19-9). Photo by GSW Athletics

COLUMBUS, GA – The Georgia Southwestern State University Baseball Team fell to tournament host Columbus State 19-9 in an elimination game on Saturday afternoon, May 14. The Hurricanes dropped to the elimination bracket after a losing a 6-5 10-inning heartbreaker Friday night against Georgia College.

In the first game against Georgia College, both teams battled back and forth, with GSW tying the game up in the ninth to take it to extras. A mammoth shot to deep left center by Greg Wozniak gave GSW the lead in the 10th, putting the Hurricanes three outs away from moving on into the winner’s bracket. A two-run shot by Georgia College in the bottom half sent the Hurricanes towards a battle with tournament host, Columbus State.

Columbus State came out firing after a disappointing performance on Friday and jumped out to an 11-1 lead early in the game. The Hurricanes showed some fight, but the Cougar bats were too much to handle and Columbus State defeated the Hurricanes 19-9 ending GSW’s season.

The Hurricanes finish the 2022 season with an overall record of 27-27.