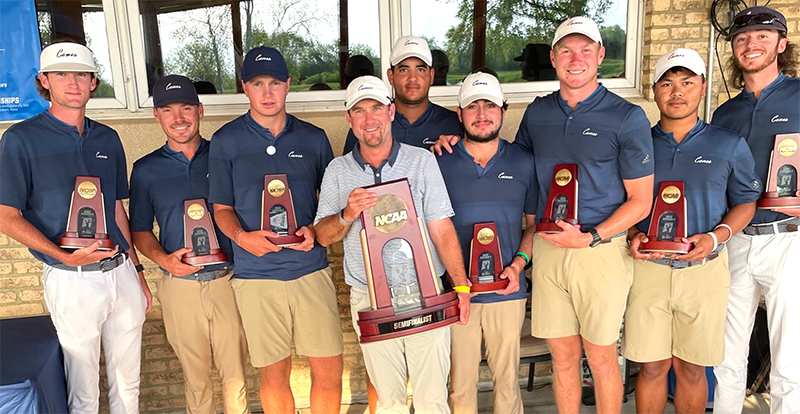 The Georgia Southwestern State University Men’s Golf Team made it all the way to the NCAA Division II Final Four before losing to Lee University in the national semifinals. Photo by GSW Athletics

AMERICUS – The Georgia Southwestern golf team lost in their match play contest against Lee University in the NCAA DII National Championship semifinals on Thursday afternoon. The Hurricanes had advanced to the semifinals after a strong 4-1 win over Colorado State Pueblo that morning. Simon Estrada, Nicolas Escobar, Jack Tharrington, and Erik Fogel all won in the early round to put the Hurricanes in their second consecutive Final Four.

The final four began moments after the Elite Eight ended with a South/Southeast battle between Georgia Southwestern and Lee University. It was tight the entire round with both teams controlling two of the matchups throughout and the second pairing matchup tied for the majority of the round. A two stroke gain on the 16th hole by Lee in the second pairing was the winning pairing with the four other pairings decided by four or more strokes.

The Hurricanes end their season two strokes short of back to back National Championships appearances. They will return every starter from this years lineup at the NCAA Championships and look to make another run at the school’s first national championship.