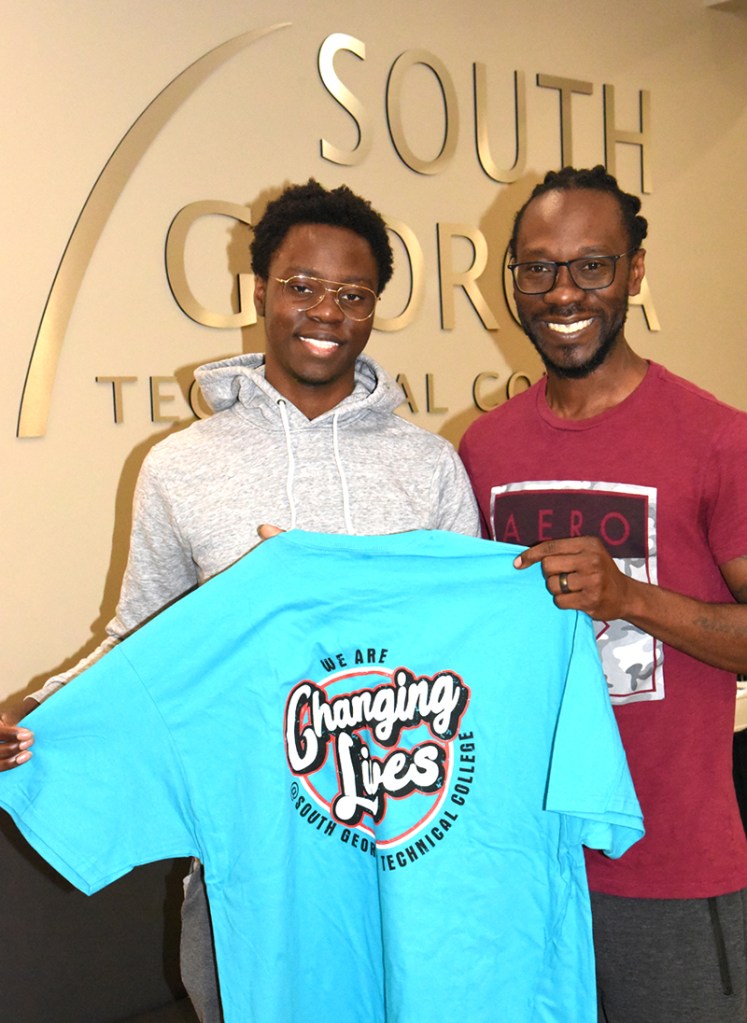 Malachi Anderson and his father, Sebastian are shown above displaying a SGTC t-shirt with the slogan “Changing Lives.” SGTC helped changed Sebastian and his father’s life and now he is entrusting the college with his son. Photo by SGTC

AMERICUS – Malachi Anderson of Warner Robins is a third generation South Georgia Technical College student and he is currently enrolled in the Drafting Technology program summer semester and living on-campus.  His father, Sebastian Anderson, graduated from the Aircraft Structural program and his grandfather, Paul Anderson, graduated in Industrial Electrical Technology.

“This is a great school,” said Sebastian Anderson.  “I came here right out of high school in 1995, graduated in 1997 and I just retired from the Warner Robins Air Force base after a 25-year career.  When Malachi finished up high school, I encouraged him to come look at South Georgia Technical College and he did. I am very proud of his decision.”

Malachi’s father and grandfather both followed more traditional hands-on careers, but the training that Malachi is receiving in the Drafting Technology program also involves a lot of hands-on learning, he just gets to use a computer and a 3-D printer.  And Malachi is an outstanding student.  He was named to the President’s list after his first semester.

“I really like the drafting program,” said Malachi Anderson.  “This is my second semester here and I feel like I am settling in.  I chose the drafting program because I like the idea of being able to design and build something.  I have always been fascinated with the structural side of building and this program lets me learn how to design buildings.  And with the 3D printers, I can see what my design is going to look like.”

Malachi said that after he completes the drafting program, he hopes to continue his education and expand his knowledge.  But he knows his time here will give him the skills he needs to help him follow his ambitions.

Sebastian Anderson said he recommended South Georgia Technical College to his son because he wanted him to have that technical background.  “I remember my first day here, I was a little standoffish.  I was not the greatest student in high school.  I didn’t really like book work.  But when I got here and got to utilize my hands, everything just flowed.  And the best thing was that I got the skills to have a great career right out of high school. I didn’t have to wait four years to begin a career.”

Sebastian also had words of praise for his former instructors Mike Reaves and Thomas Adams.  “They were both great instructors.  Mr. Reaves told me if I would come to class and do the work, he could get me a good job.  He was true to his word,” said Anderson.  “I was hired by Aero’s Corp in 1998 as part of a co-op program and then I went into government contracting work because the money was really good.  I was able to get on at the Warner Robins Air Force Base in 1997 and stayed there for 25 years.”

Malachi’s grandfather also had the same type of experience at South Georgia Tech.  “He came and enrolled in the Industrial Electrical program and he has been working ever since.  In fact, he is still working as an electrician now and he is in his 70’s,” said Sebastian.

Both Malachi and his father, Sebastian, agree that South Georgia Technical College is an awesome school.  “This is a great place to learn and to have fun.  I got to have a complete college experience here.  It is not too big, but not too small either.  I am very proud to have graduated from here and I am proud to send my son here,” said Sebastian.

For more information about South Georgia Technical College visit, www.southgatech.edu.  The college has over 200 associate degree, diploma, or technical certificate of credit programs of study offers nationally ranked academics, student activities, and intercollegiate athletics.  It has been ranked as the best two-year college in Georgia for three consecutive years.

Summer semester is currently underway but students interested in attending Fall Semester can contact Admissions Director Candie Walters at cwalters@southgatech.edu or visit the website to apply.  SGTC is also one of only two technical colleges in Georgia with on-campus housing.   Fall semester begins August 18th.  Registration will be held on July 19th and August 17th.  Individuals interested in living on-campus are encouraged to attend the July 19th registration to ensure availability for on-campus rooms.