Sumter County joins together in an effort to keep schools safe 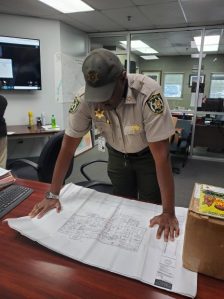 The Sumter County Sheriff’s Office (SCSO) along with other local law enforcement agencies have long had in place  policies and procedures for how to deal with an emergency, both in the general public as well as to schools specifically. Taking in the information gathered after the May 24, 2022, Robb Elementary School shooting in which 21 died, the SCSO began to look at additional ways in which to make the schools safer. Sheriff Eric D. Bryant reports, “Every reasonable law enforcement head touched based with the school head after that (the Robb Elementary shooting). Me and Mr. Walter Knighton (Sumter County Schools Superintendent) stay in touch regularly, but I went out and met with him the very next day.” There is an emergency plan in place at every school building to include the administrative and transportation buildings. Those emergency plans are comprehensive in that there is a version of them from everything to weather conditions, to school shootings. Walter Knighton reports SCS is continually reviewing a safety plan which is “comprehensive and robust to ensure the student’s safety.” He reports such conversations take place within the committee meetings of the Sumter County Board of Education (BOE) and meetings will go forward with heads of law enforcement agencies. Knighton states, “rest assured a comprehensive plan is in place to address any situation that comes about. We do everything to keep (students) safe in our learning environment.” After some discussion with Knighton, Bryant will be making some recommendations on what can further be done. The sheriff reports there are things to look for prior a dangerous situation, however that danger can come entirely too close, and he sees his role as slowing down the danger. If someone intends to cause harm, he wants it to be as difficult as possible. Some of the recommendations he will be making to Sumter County Schools (SCS), Furlow Charter School and Southland Academy will make changes to both day-to-day operations, employee action and infrastructure. “We are going to be strongly looking at shutting off the campus, with some type of surveillance system and automatic gating system within the campuses.” Bryant says in some ways, SCS is “ahead of the game.” Already the system has metal detectors, temperature sensors and a camera which has facial recognition at all schools. There is also a policy in place which demands all the exterior doors be locked. This ensures any person entering the school has to go through the systems in place. As the sheriff continues, he mentions the staff. There will need to be an understanding they will have to ensure there is no propping of doors or simply cracking it to get fresh air. “We want to make sure, that when somebody goes out these doors, the doors are secure.”

Sheriff reports Knighton is looking into how to best address there being an eye on those doors, and in Bryant’s mind, it makes sense that the teacher who is at the “end of the wing” is tasked. However, with all the tasks teachers have, Knighton and the BOE will have to give consideration to staff responsibilities as not to overload an employee. Also, along the lines of staffing changings, Bryant would like to see someone be intentional over surveilling autos wanting entrance to the gates. As it is, the front desk personnel already have many tasks to perform, and to be given this important element has the potential to overload an employee. A person to ensure the gate, as well as ensure the data gathered by existing systems will be needed. If someone wants to enter the campus, the person would be on camera and able to state their reason for being on campus. The employee would then confirm the reason is valid and allow entry. Sheriff Bryant says it is a possibility there might be solicitations for volunteers to help in these ways as providing extra eyes in other ways. “We want to at least be talking about these things, implement them and get them into place especially while there are still some COVID funds available.” Knighton reports that all the recommendations will be taken seriously, and infrastructure changes and employee charges will be presented to the BOE for the final decision.

The sheriff is not just limiting his expertise to SCS. He will be reaching out to Fresh Start Academy, Furlow Charter School and Southland Academy. Bryant mentions that Southland and Furlow already have a leg up being their campuses are already gated. So, what does a closed campus mean to students who are not bused, or to visitors who come to campus? Bryant mentions an idea about keeping the campus open during pick up and drop off hours. The parents are already aware they drop off and don’t go in the building. Again, these recommendations are not finalized and there is only the possibility these ideas will be the final recommendations.

What would it look like if there was a shooter on campus? The initial call would go into 911. At that point every active law enforcement officer available, no matter the agency would head towards the danger. There would be a place for media, and there would be a place for parents. If citizens, including parents, were to enter into a zone which law enforcement needs secure, it would only cause further delay. While law enforcement understands the sheer determination a parent has to make sure their child is safe, it is vital perimeters which a law enforcement agency establishes are respected so officers can do their job. The first step in the job to secure the safety of those in imminent danger. While law enforcement officers understand the panic which can settle in, the public needs to understand the law enforcement agency will be able to do a far more effective and efficient job if they can stay focused on those in imminent danger rather than having to provide additional resources to restrain those who don’t comply as an officer goes about getting his/her job done. According to Bryant he would set up a parent gathering spot at the top of Bumphead road. It is all part of a predetermined plan. “Trained and properly equipped to deal with that situation” is Bryant’s goal.

Bryant wants to reassure citizens everything is in place to protect the safety of the students. He also is in partnership with all local law enforcement agencies. The Sheriff states, “It all goes back to communication. We want to take this opportunity to make sure our school officials along with public safety have plans that are up to date and accurate. And our school district has been very supportive of that. We have floorplans on all our schools.” Knighton is also a fan of good communication and states “vigilant citizens” are good partners. “We can’t do it alone, if you see something let us know. It helps us beef up our plans.”

After a call has come into 911, SCS will send out an alert to parents. For the community, the office of Emergency Management will send out a call making the community at large aware. Again, there will already be an established place to report to in case you are not willing or able to shelter in place.

So, what can we do to ensure we never see such a plan having to come to fruition? Keep your eyes out. Do you see a hole in a fence? Or someone suspicious? Are you seeing social media posts which sound threatening? Is your child reporting another child’s behavior to you? All of these are things your local law enforcement wants to know about. You simply call it into 911. Perhaps it feels like you would be abusing 911. It is with certainty a potential threat investigated and detained is far better than looking back and saying, “I should have known.” Law enforcement much rather enact the plan for suspicious actions, talk and written word, than they would have to enact the plan to contain a school shooting. Knighton is also in agreement and urges citizens to contact 911 with a concern. He also adds if the threat is to a school within the SCS to also please call a principal or the administrative offices so they can also be in partnership. Lastly, volunteer. Another set of eyes on our students takes the weight off of the eyes already on the students. With some of the proposals being made, it is possible you are needed to be familiar with the grounds, be vigilant about weaknesses and report things out of the norm.

In speaking with Bryant and Knighton it is clear that the safety of the students is a partnership, and “vigilant citizens” are very much needed to ensure the population is as safe as possible. There is a role for everyone to play within the context of ensuring our students are learning within a healthy environment. Know you part of the plan.