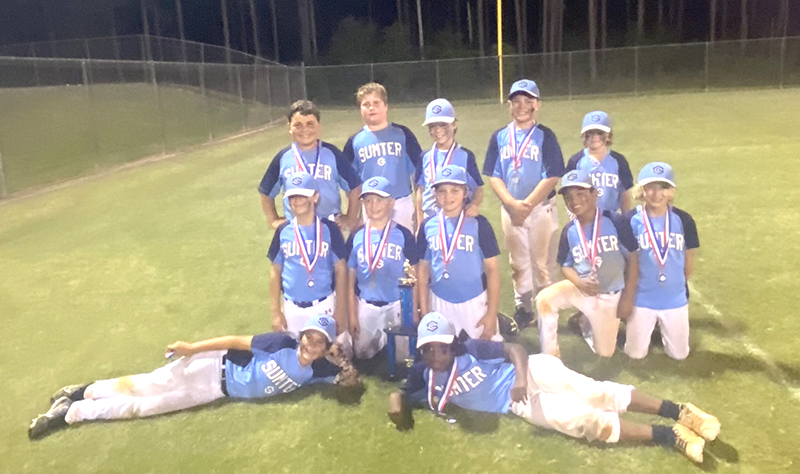 MOULTRIE – It was a great weekend for all three of the Sumter County All-Star youth baseball teams. The 12U, 10U and 8U teams each qualified for their respective Georgia Recreation and Parks Association (GRPA) state tournaments, which will be held at the Mill Creek Sports Complex in Statesboro, GA Tuesday through Friday, June 21-24.

All three of the GRPA District 3 tournaments were played at the Magnolia Sports Complex in Moultrie, GA Saturday through Tuesday, June 4-7. 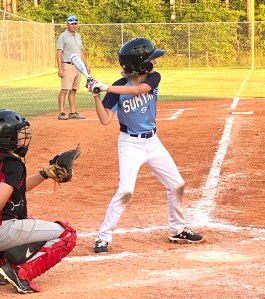 SC 10U All-Star Levi Owens went 3 for 4 at the plate in the 19-12 loss to Mitchell County.
Photo by Ken Gustafson

The 10U team, coached by Mike Reeves, qualified for state by virtue of finishing as the District 3 Tournament runner-up. They defeated Mitchell County 16-6 in their opening game and then shut out Moultrie 19-0. This put Sumter County into the championship game of the 10U tournament on Tuesday, June 7, which meant that their opponents, the Mitchell County All-Stars, would have to beat them twice to capture the district championship. Unfortunately for Sumter County, the MC All-Stars did just that, winning the first game 11-8 and then winning Game 2 by the score of 19-12 to take the District 3 10U Machine Pitch Championship.

“I thought our team played well. Today, Mitchell was just a better team hands down,” Reeves said. “We give credit to Mitchell. They came to play. They hit the ball well. They fielded the ball well. That’s the name of the game.” 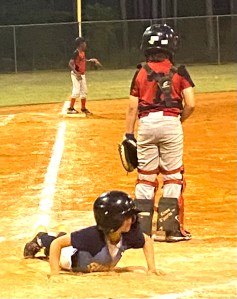 However, MC scored a run in the sixth and three more in the seventh. Though Sumter County tried to make a comeback in the bottom of the seventh and scored a run to get to within three, their bid for a come-from-behind victory fell short as MC went on to win the first game 11-8. 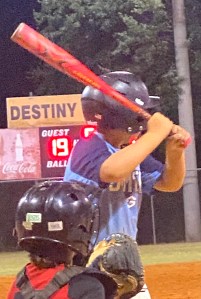 SC 10U All-Star Jase Storey is at the plate for Sumter County.
Photo by Ken Gustafson

Having won Game 1, MC forced a winner take all Game 2 against Sumter County and in this second game, MC took control early and never looked back on their way to a 19-12 victory over the SC 10U All-Stars and the District 3 title.

In spite of back-to-back losses to Mitchell County in the 10U District 3 Tournament, Sumter County still qualified for the GRPA 10U Machine Pitch State Tournament in Statesboro.

As far as the Sumter County 8U Machine Pitch All-Stars were concerned, they were able to win their District 3 tournament and will head to Statesboro as the #1 seed out of District 3. They lost their opening game to the Bainbridge All-Stars 9-8, but rebounded with wins over Mitchell County (15-0) and Moultrie (13-5). The Sumter County 8U All-Stars then followed that up with a 19-4 win over Grady County and a 22-4 over Bainbridge. This three-game winning streak in the losers’ bracket of the double-elimination tournament by the SC All-Stars put them into the District 3 championship game against Bainbridge and for the third time of the tournament, SC came out on top. They defeated Bainbridge 13-3 to capture the GRPA District 3 Machine Pitch title. 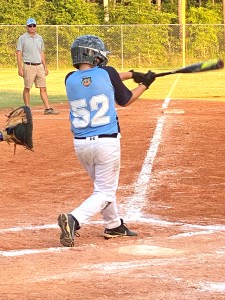 SC 10U All-Star Karter Patrick went 1 for 4 at the plate with a single and scored a run in his team’s 19-12 loss to Mitchell County in the District 3 Championship Game.
Photo by Ken Gustafson

The third Sumter County team to qualify for state was the 12U Traditional All-Stars (traditional meaning a player pitches). The SC All-Stars lost to Bainbridge 9-8 in their opening game, but rebounded with wins over Crisp County (10-1) and Bainbridge (18-5). This put them in the title game against Moultrie, but the boys from Colquitt County defeated Sumter County 14-6 to take the District 3 title.

Nevertheless, by virtue of finishing as the District 3 runner-up, the Sumter County 12U All-Stars will be joining the other two SC teams in Statesboro for the GRPA 12U State Tournament.