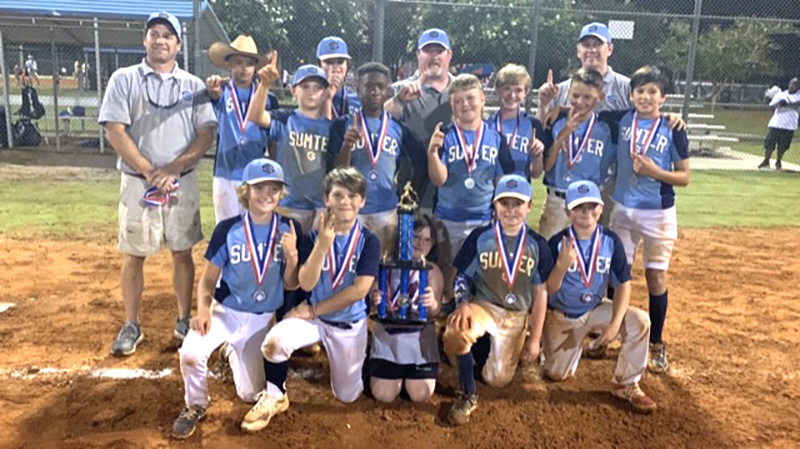 MOULTRIE, GA – The Sumter County 12U All-Star Baseball Team began their quest to qualify for the GRPA 12U State Tournament. The Sumter County All-Stars also known as the Bombers opened the district tournament against Bainbridge. The Bombers raced to an Early 7-4 lead unfortunately Bainbridge was able to retake the lead 9-7 late and hung on to win the game 9-8. Charlie Kellam and Mathew Owens combined to pitch six innings allowing five runs on 10 hits while striking out eight batters. The Bombers got 10 hits and scored eight runs. William Webb, David Guest, Clay Hicks, Gage Norman, Charlie Kellam, Mathew Owens, Mason Dowdey, Noah Hosley and Braylan Crason all either had a hit or an RBI. With their backs against the wall, the Bombers now had to win their next two games in order to qualify for the state tournament.

The Bombers next took on Crisp County. With a chip on their shoulder, the Bombers came out swinging and quickly put four runs on the board before Crisp was able to score to make it 4-1 in favor of Sumter and then Max Kelley decided to go ahead and break the game open with a three-run homer. Sumter held on to win 10-1.

Max Kelley and Clay Hicks combined to pitch five innings allowing one run on one hit while striking out 13 batters. William Webb, Charlie Kellam, Clay Hicks, Gage Norman, Max Kelley, Noah Hosley, Logan Webb, Wes Brock and Mathew Owens all reached base against Crisp County. The win set up a rematch against Bainbridge in which the winner would advance to state. With an overcast sky and rain looming the Boys from Sumter got on the board first and jumped out to an 11-2 lead behind another homerun from Max Kelley. Then the rains came. However, the game continued and Bainbridge was able to mount a comeback. With the score now 11-5 and Bainbridge switching to their ace pitcher, it looked like Bainbridge was poised to steal another game from Sumter. This time, the outcome would be different as Sumter scored eight runs in the top of the fourth inning and shut Bainbridge out to seal the win, clinching the first trip to State since 2018 for the Sumter County 12U All-Stars. Wes Brock, Clay Hicks, and Matthew Owens combine to pitch 4 innings allowing 5 runs on 3 hits while striking out 5 batters. Gage Norman, Clay Hicks, David Guest, Matthew Owens, Max Kelley, Wes Brock, William Webb, Charlie Kellam, Noah Hosley, Mason Dowdey, Braylan Carson, and Logan Webb all reached base and scored in the win for the Bombers.

The win advanced Sumter to take on the defending state champions Moultrie. Moultrie advanced to the championship game by beating Crisp 15-0 and Bainbridge 19-1. Sumter came out swinging in the first inning and started the game off with three straight line drives. However, a few bad breaks resulted in the Bombers not scoring any runs. Moultrie responded by scoring six in the bottom of the first and adding another three runs in the third to take a 9-0 lead in what appeared to be another shutout run rule game for Moultrie.

In the top of the fourth inning the, boys from Sumter had other ideas and wouldn’t be satisfied with just scoring a run. They wanted to send a message that they came to play ball. After two walks and a ground out to start the inning, Sumter scored six straight runs to make the score 9-6. Moultrie was able to take advantage of some walks and used their speed to stretch the lead back out to 14-6, which is how the game ended but not before a hard fought contest from Sumter.

“ I am really proud of not only our guys but the 8u and 10u for also making it to state,” 12U Sumter Head Coach Lewis Webb said. “We are the only park that sent all of their age groups to State. I am absolutely thrilled for the 12-year-olds on this team. They have been close the last few years and now we made it. To do it the way we did it too was amazing to have to deal with the conditions we had and still play through it. I am truly blessed that I am able to coach this team. They are all amazing kids, both 11 and 12-year-olds, and we are excited to go to State. I want to thank my coaches William Webb, Steve Brock and Josh Hicks, as well as Tim Estes and Jeff Fussel and the Sumter County Rec Department for all of their support. I want to thank all of our parents for being so supportive. We will be doing a fundraiser in downtown Americus on Saturday June 18th from 11am to 1pm. Please come out and support us.”