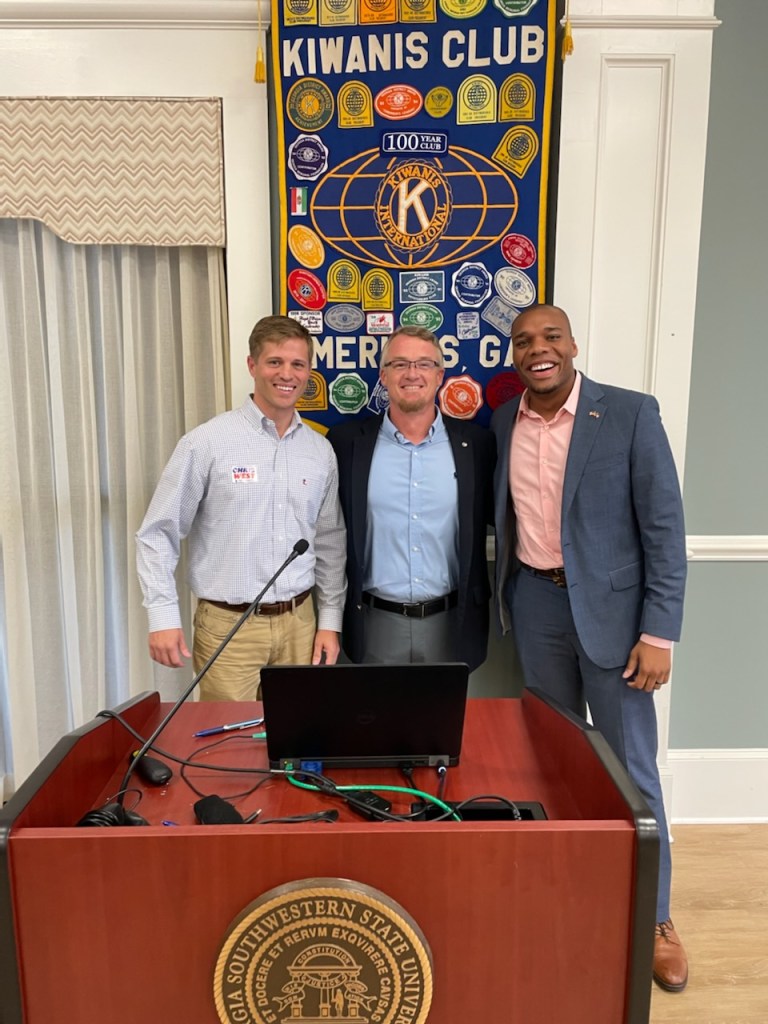 On Tuesday, June 21, 2022, we will once again show up at the polls to make a decision on how our nation runs and whose voice best expresses our values. If you are voting a republican ticket, you have one race to decide. It is that of house congressional district two, which Sanford Bishop is the incumbent and the democratic nominee. In an effort to get to know more Sumter Countians, the contenders, Jeremy Hunt and Chris West introduced themselves and presented some of the issues as they see them. These men have been on the campaign trail for quite some time, and the Kiwanis meeting on Friday, June 16, 2022, was not the first time they have campaigned together.

According to Jeremy’s website, jeremyforgeorgia.com, he wants the electorate to know three personal facts about him which serve to drive his efforts. He is a West Point graduate and former U.S. Army Captain, a husband, a father, a proud Georgia native and a Christian and proven conservative. “Jeremy’s concern for the future of our country grew even more once he and his wife were blessed with a little girl. He resolved to never surrender his daughter’s future to self-entitled elites who want to redefine what it means to be American. With the rising threat of China and Iran from afar and the spread of woke-ism from within, Jeremy is stepping up to help turn the nation around.” Building upon a history of service and waiting to speak out on the state of affairs for our nation and our state, he has “published a series of op-eds on Fox News.com, the New York Post, the Washington Post and made over sixty regular TV appearances on Fox News. Jeremy identifies as an outspoken champion for conservative values. He also served as a Visiting Fellow at the Heritage Foundation and has positioned himself as a leader in the next generation of conservatives.” Jeremy has spent some time in Sumter County over the course of this campaign. He listed off several of our local eateries he has visited and several of our neighbors he has come to know.

He sees several key issues which will propel him in the future should he win the race. At Kiwanis he spoke on the importance of agriculture professions and being a solid voice for the farming community. He understands a large percentage of this district is thriving upon the backs of those invested in farming, whether it be dairy farming, machinery needs or the actual sowing and reaping of our crops. In addition to farming, he considers himself a good candidate because of his pro-life views, passion for public safety, ability to promote economic opportunity, Second Amendment rights and national security.

For the primary held in late May, Jeremy and Chris were two of six candidates running for the position. Although falling short of the 50% plus one vote to avoid a runoff, Jeremy garnered almost 37% of the district’s republican votes, while Chris gathered about 30% of the vote. In Sumter County, Jeremy gathered 47% of the vote while Chris was chosen by 27%.

Chris West also holds out three key things about himself on his website, chriswestga.com. He is an Air Force officer, a job creator and an America first fighter. He introduces himself as “a Christian, father, husband, and lifelong South Georgian born and raised in the 2nd Congressional District. Chris currently serves as general counsel for a Teramore Development, LLC, a local real estate development company. Over his career, Chris has helped complete over 150 projects across South Georgia, creating more than 1500 jobs in the process. Chris is also an officer with the Georgia Air National Guard, where he serves as an executive officer in the 116th Mission Support Group, Robins Air Force Base. He serves on the Board of Governors of the State Bar of Georgia and has been a grassroots leader and volunteer in the Georgia Republican Party since 2004. He is very involved in his community, previously serving on the board of the Rotary Club of Moultrie, the board of the United Way of Colquitt County and as a Thomasville YMCA youth soccer coach. Chris’ family also owns and operates a third-generation agricultural business in South Georgia. He received his undergraduate and master’s degrees from Valdosta State University and his law degree from Faulkner University. Chris and his wife Jenny—a former Grady County School teacher—along with their children Preston, Presley, and Paisley reside in Thomasville, where they are members of First Baptist Church of Thomasville.”

Chris also reports on places and folks of Sumter County. He has been visiting Sumter County since his youth. Chris also sees the pathway to beating Bishop through our agricultural community. He also is aware of the role of our farmers and the vital part they pay in the second congressional district. He intends to keep his ear on the conversations of our people so he can speak on our behalf. One of the key issues he wanted the crowd to understand is he has been familiar with and visited Sumter County for much longer than his campaign.

Both of the gentlemen have stepped up to serve us with a specific and particular skill. They both are eager to get the job done.

Tuesday the 21st will be election day and you should vote at your regular precinct from the hours of 7am to 7pm. As we have all heard, voting is more than a right, it is your voice in a world which clatters with many ideas. The person we choose to loan our voice to is an important one. As both of these men will testify to. As both of these men have served to ensure your voting right is a privilege to be enjoyed.

The winner Tuesday night will go onward to face Sanford Bishop in the general election in November. A special gratitude is owed the Kiwanis Club for allowing us to meet the candidates and learning more about both their personalities as well as their passions.